A new twist to the dragon genre


Every now and then I find a book that is thoroughly entrancing - sometimes figuratively, sometimes literally. One such book to cross my path recently has been Magic, Mensa & Mayhem by my online friend Karina L. Fabian. 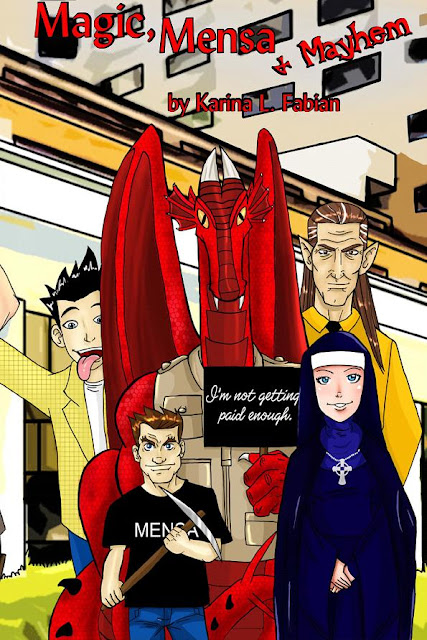 I don't normally endorse products on this blog, but I just have to give a huge 'thumbs up' to this one. The book is a delightful romp. Vern, a dragon under geas to St. George in Faerie, works as a private detective here on Earth, after having been catapulted through a rift between the worlds. As he puts it:

"When the Interdimensional Gap opened between our worlds, it did it in Los Lagos on the Mundane side and near Peebles-on-Tweed in Faerie. Guess that's what you get when a nuclear power plant blows up just as a magical spell goes wrong in ours. Don't try it at home. Really, don't."

In his latest caper, according to the author:

It should have been a cushy job: Vern, the dragon detective, and his partner, the mage Sister Grace, are given an all-expense paid trip to Florida to chaperone a group of Magicals at a Mensa convention. Then the pixies start pranking, the Valkyrie starts vamping and a dwarf goes to Billy Beaver's Fantasyland hoping to be "discovered." Environmentalists protest Vern's "disrupting the ecosystem," while clueless tourists think he's animatronic. When the elves get high on artificial flavorings and declare war on Florida, it turns into the toughest case they aren’t getting paid for.

Really, this book is just plain fun. Lots of humor, weird and wonderful imaginings, and a cast of characters that'll have you splitting your sides. I loved it! Highly recommended.

You can read more about Vern at his Web site, and learn more about this and previous books.

Thanks, Pete! I'm so glad you enjoyed the book!