This would make an epic April Fool joke


I had to laugh to read of a New York "artist" and his latest spoof project.

It’s the city’s secret tragedy: the giant-octopus attack on the Cornelius G. Kolff, a Staten Island Ferry boat dragged to a ­watery grave with 400 souls aboard on Nov. 22, 1963.

Few recall the harbor horror because news coverage was eclipsed by the shocking assassination of John F. Kennedy in Dallas that very day.

Also because it never actually happened.

But truth is no obstacle to artist Joe Reginella, the hoaxster whose slick brochures, Web site and even a statue are luring hapless tourists to a far corner of Staten Island in search of a museum devoted to the fantastical fish tale.

Said Australian tourist Tamara Messina: “The brochure sounded very intriguing,” adding that her three young sons “seemed a bit more concerned that it may happen again” as the family rode the ferry.

The T-shirts are the only thing that’s actually real.

He carts his “memorial” statue depicting the tragic event in cast bronze to Battery Park and other public locations and watches the startled reactions of passers-by.  (Click the image for a larger view.) 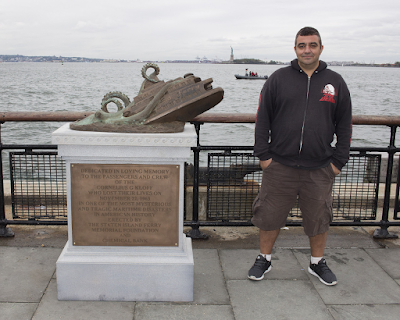 There's more at the link, including more photographs, the brochure, etc.

(He's even set up a Web site for his project, where you can buy an octopus memorial T-shirt.  I'm darned if I don't buy one, just to say "Thank you" for the entertainment.  No, I'm not being compensated in any way for mentioning it.  I'm just highly amused!)

An overshadowed death of a greater man that day, of one Clive Staples Lewis.

LOL, the gullibility of the average public is amazing... What was the famous PT Barnum line? "There's a sucker born every minute."

Liars of any type don't amuse me. I'd enjoy his head on a pike.

This way to the egress.

Gee, I wonder if this was the same creature!