Today's award goes to the member of Congressional representative Brian Mast's staff who posted this tribute on Twitter to the US Navy.  (I presume it wasn't composed by Mr. Mast himself - he's a combat veteran, and, given that background, hopefully knows enough about the navies of world powers not to make this mistake.  Even so, it went out under his name, so he owns it.) 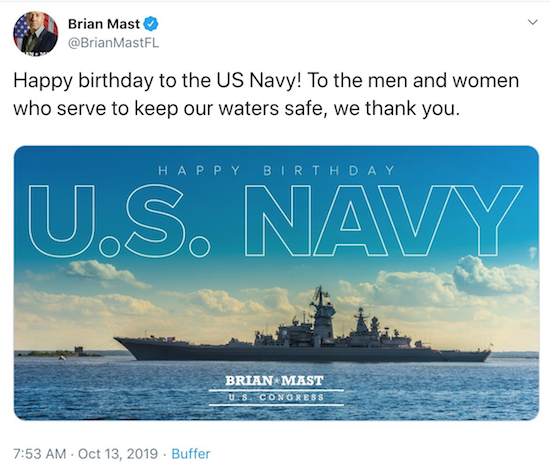 Sadly, the tribute was misplaced.  That picture shows the Russian battlecruiser Pyotr Velikiy, not a US Navy ship.  The original tweet has since been corrected, and now shows a US Navy carrier task force.  Still, it was fun while it lasted, and attracted more than a few negative remarks from other denizens of Twitter.  I daresay some hapless communications intern or assistant has since received counseling as to his or her choice of images!

A Kirov-class battlecruiser, by the silhouette, was my reaction. (Opens the bottle of Tango Foxtrot whiskey.)

Unless someone's classified MoH or Navy Cross just went public source, or the fleet got an interesting shipyard deal, someone goofed big time.

Well, to be fair, the Dems have done this about every other year for the last 20 years that I know of.

Of course, looks don't really suggest anything about power on the scale we used.

Combat veteran, especially if a veteran of the Army, doesn't really imply much knowledge about Navy ships.

I did 20 years in the Army, and unless it's a USN carrier or sports Aegis radars, I would be hard pressed to tell you whom a given ship belonged to unless I could see the flag.

I was a Dirt Sailor and knew it wasn't one of ours when I saw it.