Saturday Snippet: "The Night Life of the Gods"


Thorne Smith was an American satirical author who flourished in the first half of last century.  Two of his books were made into successful Hollywood films, and his acerbic humor and biting wit made him a best-seller.  Many of his books are still in print.

One of my favorites among his novels is "The Night Life of the Gods". 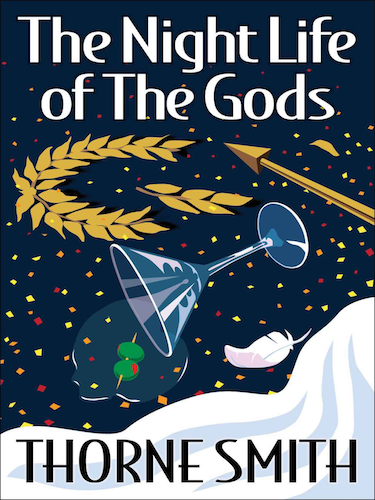 Very briefly, Smith's protagonist, Hunter Hawk, and his light o' love, Megaera, bring to life a number of statues of the Greek and Roman gods in a New York museum.  They then set about introducing the now-living gods to modern city life.  The results are hysterical, to put it mildly.

One of my favorite scenes from the book takes place in a fish restaurant.  I'll let Thorne Smith describe it.

The Olympus mob was foregathered at what is perhaps one of the world’s fishiest eating establishments. There might be places equally fishy, but certainly no place could get itself fishier. It far surpassed the sea god’s fondest expectations, for more fishiness per square foot was crammed into the shabby, antiquated room than he had ever believed possible outside of his spray-crested realm.
The room was not lacking in personality. It had an atmosphere entirely its own. In it were to be found some of the smartest and most desperate fish eaters in the city — fish eaters in on the know.
Whereas fish fanciers congregated at the Aquarium a few blocks south to gaze ineffectually at humiliatingly indifferent fish, the habitués of this river-front room — the real natural-born fish eaters of serious purpose and honest intent — came here with much heavier business in view. Their object was not merely frivolously to contemplate fish. Far from it. They came here to do something about fish, something positive and definite, something held clearly in mind. In short, to eat the things.
One cannot tell by observing a person looking at a fish whether that person is genuinely fond of fish or thoroughly detests them — loathes them, in fact. The fish watcher might be doing either one of two things — gloating over the incarceration of the fish, or deriving enjoyment from the contemplation of their stupid activities. No such doubt can exist when observing a person eating fish. One can tell at a glance whether that person is sincerely fond of fish or is merely tolerating the fish until something less disagreeable turns up, such as tripe.
The true fish eater never hides his light beneath a bushel unless it happens to be a bushel of oysters or clams. Fish eaters are frank about it. And if not extremely careful they can develop into terrific bores.
The restaurant was redolent of fish. Outside, the streets were slippery with them — lined with fish markets. Pretty nearly every water-loving creature that ever swam, crawled, oozed, or drifted seemed to have settled in the neighborhood. In this district no fish need ever feel lonely. Few ever did, because most of them were quite dead.
The Hawk party were seated at a large round table. There was ample elbow-room and a feeling of spaciousness. It was a table designed to hold a great many fish or one lightweight whale — as many as a party of ten could decently eat at one sitting. Perseus had placed his head beside his chair on the sawdust-sprinkled floor. He had done this because the negro waiter had refused to approach the table until the disconcerting object was out of sight. Mercury had laid aside his caduceus, and Neptune had slipped his trident under the table. Diana had left her bow at home.
“To begin with,” began Mr. Hawk, “does anyone here want fish?”
“The very word revolts me,” Venus declared. “This is no place for the goddess of love. I belong in a night club.”
“Ask the waiter to bring us a cup,” said Hebe in a low voice, “and fill it from that flask you have on your hip. The gods are getting low.”
Neptune was too bemused to answer his host’s question. His eyes were fixed on an ice-tank on the top of which reposed in horrid state a number of ill-tempered-looking lobsters. Unable to bear the sight any longer, the great man left the table and laid violent hands on two of the ugliest, most anti-social-looking crustaceans Mr. Hawk remembered ever having seen. With this wickedly animated pair of pliers he returned to the table and prepared to do battle with them there and then in cold blood.
“Those damn things are worse than my snakes,” Perseus complained. “Look at the faces on them.”
“I can’t bring myself to look at him,” said Diana. “He’s actually going to eat the things alive.”
The negro waiter’s eyes were doing something good in the line of popping. “Gawd, brother,” he muttered to an associate, “that pitchfork-toting party is one tough gentleman. See him snapping at them great big green rascals.”
“Would you mind going away to some secluded corner and fighting out your battles alone?” Venus asked her uncle.
“Tooth against claw,” observed Mercury. “I bet on the teeth.”
“What’s wrong with the lot of you?” demanded Neptune, sighting at the table between the jagged claw of one of his opponents. “I always tackle ‘em this way.”
A few of the more advanced fish eaters in the room were regarding the sea god with attentive admiration. They had never tried lobsters quite so fully alive themselves and were anxious to see just how one went about it.
Although aware of the attention Neptune’s impulsive action was attracting to the table, Mr. Hawk retained his self-possession. He reached over and quietly but firmly removed one lobster from Neptune’s grasp; then with his left hand he removed the other. The god was too astonished to protest effectively. The scientist nodded to the waiter.
“Take these things outside,” he said, “and cook them.”
Neptune gazed after the departing waiter in speechless indignation, then turned to Mr. Hawk. “What did you want to do that for?” he demanded.
“Had I known previously,” replied Mr. Hawk quietly, “that you wanted to fight lobsters, I’d have made more suitable arrangements.”
“But I always polish off a couple of live lobsters before I wire into the fish,” the god protested.
“I was unfamiliar with your habits,” the scientist explained with a faint smile. “However, I think you’re going to enjoy these lobsters just as well. They’re delicious when they’re broiled.”
“Are they?” Neptune exclaimed, his face brightening up. “I can hardly wait.”
“You didn’t,” remarked Mr. Hawk briefly.


I highly recommend the book to those of a satirical bent.  You'll giggle a lot.

That reads like Terry Pratchett with a landed-class accent! Headed to the library forthwith!

I read "Rain in the Doorway" when I was in college, many years ago.

It wasn't until years later I found out he also wrote "Topper".

My college library had most of his books, lo these many years ago.

I devoted a lot of study time to them for a few weeks after I stumbled across the first one. Thinking back, my grades did take a dip that semester ...

I am so old that Thorne Smith was still in my Public Library, though he was Jazz Age, he is still recommended reading, my Mother read him when she was a young girl

So now I have yet another book in the queue on my Kindle, waiting for me to have a block of reading time.
I need to get the 'flu or something, so I can lounge around reading.

Would Neptune eat fish? As god of the sea, didn't he create them?

Terry Pratchett's writing creates a civilization, although one far afield from what we consider the norm. This? This is silly, badly written, idiotic nonsense.

Any dozen people in my high school crearive writing class could have written this.

I recommend a bit of study of the ancient pantheon. Greek and Roman gods are capable of any behavior you can imagine, and some you cannot.

I suspect for all your literary acumen, you have not read your Bullfinch.

I used to (and may still) have most of his books in the paperback reissues, along with a few (like The Bishop's Jaegers) in hardback. I consider The Night Life of The Gods to have one of the most poignant endings I've read. Thank you for reminding me of it.