We've encountered the late naturalist Gerald Durrell on more than one occasion in these pages.  I thought it was time for another extract from one of his many books.  This one's from "A Zoo in my Luggage", an account of his second visit to Bafut in what was then British Cameroon (today part of the modern state of Cameroon), to collect animals for what would become his own zoo, dedicated to the conservation and preservation of threatened and endangered species. 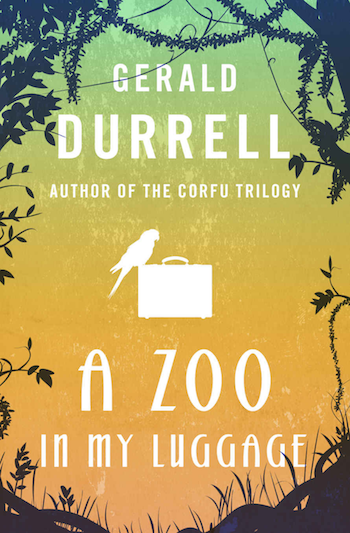 On its way to Bafut, the expedition stopped over in the town of Mamfe to collect animals.  A trip to investigate a report of a very large python turned into a riverine adventure.

To reach the area of country in which our quarry was waiting, we had to go down the hill and cross the river by the ferry, a large, banana-shaped canoe which appeared to have been constructed about three centuries ago, and to have been deteriorating slowly ever since. It was paddled by a very old man who looked in immediate danger of dying of a heart attack, and he was accompanied by a small boy whose job it was to bale out. This was something of an unequal struggle, for the boy had a small rusty tin for the job, while the sides of the canoe were as watertight as a colander. Inevitably, by the time one reached the opposite bank one was sitting in about six inches of water. When we arrived with our equipment on the water-worn steps in the granite cliff that formed the landing-stage, we found the ferry was at the opposite shore, so while Ben, Agustine and the enormous African (whom we had christened Gargantua) lifted their voices and roared at the ferryman to return with all speed, Bob and I squatted in the shade and watched the usual crowd of Mamfe people bathing and washing in the brown waters below.

Swarms of small boys leapt shrieking off the cliffs and splashed into the water, and then shot to the surface again, their palms and the soles of their feet gleaming shell pink, their bodies like polished chocolate. The girls, more demure, bathed in their sarongs, only to emerge from the water with the cloth clinging to their bodies so tightly that it left nothing to the imagination. One small toddler, who could not have been more than five or six, made his way carefully down the cliff, his tongue protruding with concentration, carrying on his head an enormous water-jar. On reaching the edge of the water he did not pause to remove the jar from his head, or to take off his sarong. He walked straight into the water and waded slowly and determinedly out into the river until he completely disappeared; only the jar could be seen moving mysteriously along the surface of the water. At length this too vanished. There was a moment’s pause, and then the jar reappeared, this time moving shorewards, and eventually, beneath it, the boy’s head bobbed up. He gave a tremendous snort to expel the air from his lungs, and then struggled grimly towards the beach, the now brimming jar on his head. When he reached the shore he edged the jar carefully on to a ledge of rock, and then re-entered the water, still wearing his sarong. From some intricate fold in his garment he produced a small fragment of Lifebuoy soap, and proceeded to rub it all over himself and the sarong with complete impartiality. Presently, when he had worked up such a lather all over himself that he looked like an animated pink snowman, he ducked beneath the surface to wash off the soap, waded ashore, settled the jar once more on his head and slowly climbed the cliff and disappeared. It was the perfect example of the African application of time-and-motion study.

By this time the ferry had arrived, and Ben and Agustine were arguing hotly with its aged occupant. Instead of taking us straight across the river, they wanted him to paddle us about half a mile upstream to a large sandbank. This would save us having to walk about a mile along the bank to reach the path that led to the forest. The old man appeared to be singularly obstinate about the proposal.

‘What’s the matter with him, Ben?’ I inquired.

‘Eh! Dis na foolish man, sah,’ said Ben, turning to me in exasperation, ‘’e no agree for take us for up de river.’

‘But how you go lose you boat?’ I asked in amazement, for I knew this strip of river and there were no rapids or bad currents along it.

I stared at the ferryman, wondering what on earth he was talking about. Was Ipopo perhaps some powerful local juju I had not come across before?

‘Dis Ipopo,’ I asked soothingly, ‘which side ’e live?’

‘What’s he talking about?’ asked Bob in bewilderment.

And suddenly it dawned on me. ‘He’s talking about the hippo herd in the river below the D.O.’s house,’ I explained, ‘but it’s such a novel abbreviation of the word that he had me foxed for a moment.’

‘Does he think they’re dangerous?’

‘Apparently, though I can’t think why. They were perfectly placid last time I was here.’

I turned to the old man again. ‘Listen, my friend. If you go take us for up dis water, I go pay you six shilling and I go dash you cigarette, eh? And if sometime dis ipopo go damage dis your boat I go pay for new one, you hear?’

‘I agree, sah,’ said the old man, avarice struggling with caution. We progressed slowly upstream, squatting in half an inch of water in the belly of the canoe.

‘I suppose they can’t really be dangerous,’ said Bob casually, trailing his hand nonchalantly in the water.

‘When I was here last I used to go up to within thirty feet of them in a canoe and take photographs,’ I said.

Ahead of us the brown waters were broken in many places by rocks. At any other time they would have looked exactly like rocks but now each one looked exactly like the head of a hippo, a cunning, maniacal hippo, lurking in the dark waters, awaiting our approach. Ben, presumably remembering his tale of daring with the bush-cow, attempted to whistle, but it was a feeble effort, and I noticed that he scanned the waters ahead anxiously. After all, a hippo that has developed the habit of attacking canoes gets a taste for it, like a man-eating tiger, and will go out of his way to be unpleasant, apparently regarding it as a sport. I was not feeling in the mood for gambolling in twenty feet of murky water with half a ton of sadistic hippo.

The old man, I noticed, was keeping our craft well into the bank, twisting and turning so that we were, as far as possible, always in shallow water. The cliff here was steep, but well supplied with footholds in case of emergency, for the rocks lay folded in great layers like untidy piles of fossilized magazines, overgrown with greenery. The trees that grew on top of the cliffs spread their branches well out over the water, so that we travelled in a series of fish-like jerks up a tunnel of shade, startling the occasional kingfisher that whizzed across our bows like a vivid blue shooting-star, or a black-and-white wattled plover that flapped away upstream, tittering imbecilically to itself, with its feet grazing the water, and long yellow wattles flapping absurdly on each side of its beak.

Gradually we rounded the bend of the river, and there, about three hundred yards ahead of us on the opposite shore, lay the white bulk of the sandbank, frilled with ripples. The old man gave a grunt of relief at the sight, and started to paddle more swiftly.

‘Nearly there,’ I said gaily, ‘and not a hippo in sight.’

The words were hardly out of my mouth when a rock we were passing some fifteen feet away suddenly rose out of the water and gazed at us with bulbous astonished eyes, snorting out two slender fountains of spray, like a miniature whale.

Fortunately, our gallant crew resisted the impulse to leap out of the canoe en masse and swim for the bank. The old man drew in his breath with a sharp hiss, and dug his paddle deep into the water, so that the canoe pulled up short in a swirl and clop of bubbles. Then we sat and stared at the hippo, and the hippo sat and stared at us. Of the two, the hippo seemed the more astonished. The chubby, pink-grey face floated on the surface of the water like a disembodied head at a séance. The great eyes stared at us with the innocent appraisal of a baby. The ears flicked back and forth, as if waving to us. The hippo sighed deeply and moved a few feet nearer, still looking at us with wide-eyed innocence. Then, suddenly, Agustine let out a shrill whoop that made us all jump and nearly upset the canoe. We shushed him furiously, while the hippo continued its scrutiny of us unabashed.

He seized the paddle from the old man’s reluctant grasp, and proceeded to beat on the water with the blade, sending up a shower of spray. The hippo opened its mouth in a gigantic yawn to display a length of tooth that had to be seen to be believed. Then, suddenly, and with apparently no muscular effort, the great head sank beneath the surface. There was a moment’s pause, during which we were all convinced that the beast was ploughing through the water somewhere directly beneath us, then the head rose to the surface again, this time, to our relief, about twenty yards up-river. It snorted out two more jets of spray, waggled its ears seductively and sank again, only to reappear in a moment or so still farther upstream. The old man grunted and retrieved his paddle from Agustine.

‘Agustine, why you do dat foolish ting?’ I asked in what I hoped was a steady and trenchant tone of voice.

‘Sah, dat ipopo no be man … na woman dat,’ Agustine explained, hurt by my lack of faith in him.

‘How you know?’ I demanded.

‘Masa, I savvay all dis ipopo for dis water,’ he explained, ‘dis one na woman. Ef na man ipopo ’e go chop us one time. But dis woman one no get strong head like ’e husband.’

‘Well, thank God for the weaker sex,’ I said to Bob, as the old man, galvanized into activity, sent the canoe shooting diagonally across the river, so that it ground on to the sandbank in a shower of pebbles.


Lest you think the boatman's caution was unwarranted, consider that hippo are among the most dangerous animals on the African continent.  They routinely kill hundreds of people every year.  Here's a brief video of a hippo charging a boat on the Chobe River in Botswana (an area I used to know) in 2015.  He wasn't bluffing, either!

Far too many people have a mental image of hippos as the miniskirt-wearing dancers in Disney's Fantasia.

That image couldn't be further from the truth!  As I've noted before, if you see a hippo "yawning" . . . that's not a yawn!