Smuggling a war memorial out of the Soviet zone of occupation

I'm grateful to reader A. H. for sending me the link to this account of how the US Army helped recover an historic Danish war memorial in the aftermath of World War II.

Seventy-five years ago, Colonel Barney Oldfield, a Nebraska-born U.S. Army public affairs officer, spearheaded the bronze statue’s repatriation. Calling it one of his strangest experiences in “peace or war,” Oldfield wrote that the Isted Lion held the same “emotional, sentimental and patriotic meaning” for the Danes that the Statue of Liberty had for Americans.

The Isted Lion was created by H.W. Bissen to commemorate Danish soldiers killed in the 1850 Battle of Isted in which the Danes defeated German-minded insurgents backed by Prussian troops. More than 6,400 soldiers were killed and wounded on both sides. It was then Scandinavia’s costliest battle to that date. 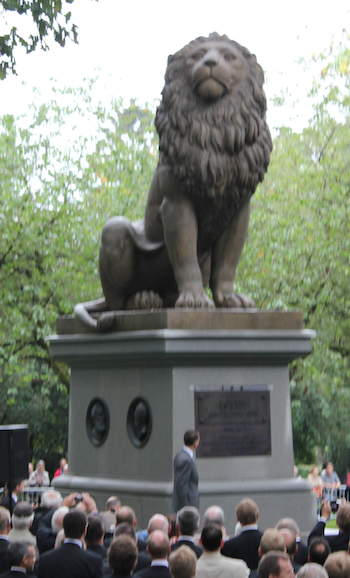 Danish dignitaries and celebrities, including fairy tale writer Hans Christian Andersen, attended the imposing war memorial’s dedication in 1862 in Flensburg’s St. Mary’s Cemetery, then part of Denmark. Many German nationalists were not pleased with the lion’s placement in the Danish port town of Flensburg instead of rural Isted. They viewed it as a victory snub. It didn’t help that Denmark placed the 12-foot-tall feline facing sternly south toward Germany.

The lion didn’t remain in place for long. In 1864, Prussian and Austrian troops fought the Danes again and won. Denmark surrendered Flensburg to Germany, and the Isted Lion’s iconic transformation began: from Danish war memorial to German war booty.

Prussian troops carted the lion 225 miles to Berlin’s Zeughaus Museum in 1868. Later, it was moved to Berlin’s Lichterfelde Cadet Academy, a symbol of military supremacy to inspire cadets until Germany’s World War II surrender in May 1945.

When Danish war correspondent Henrik V. Ringsted learned of the stolen Isted Lion’s whereabouts in summer 1945, he turned to Colonel Oldfield with an unusual request. “He wanted some help in moving the monument,” Oldfield wrote, “and wondered if the U.S. Army could be it.” Eisenhower said it could.

The 12-foot-tall Isted Lion was too big to be flown to Denmark by C-47 aircraft. Instead, the lion was carefully hoisted from its pedestal by crane, disassembled by an engineering platoon and lifted onto a soft bed of sawdust that filled a 10-ton trailer. Oldfield mapped out a speedy 600-mile run with the lion from Berlin over pockmarked roads and choppy North Sea waters to Denmark.

Oldfield believed the journey’s riskiest part was its first 110 miles through the Russian occupation zone. He worried Russian sentries might recognize and confiscate the historic lion for the Soviets to use as political leverage against Denmark.

There's much more at the link, including photographs.  The journey out of the Soviet zone of occupation in eastern Germany, through the Western occupation zones, to Denmark, sounds like it was quite an adventure.

I'd never heard of the Battle of Isted, or the Isted Lion.  It's nice to come across snippets of history that are fresh and new to me.

This oughta be a THG snippet, if it isn't already.

Anyway, this is a remarkable piece of history. It is a prime example of what America has been about since it's founding.

The Colonel was 3rd cousin one removed from the driver. Their common ancestor was born in 1750 in New York.