I'm sure many readers interested in the shooting sports are familiar with the "throw lever" sometimes integrated into the power ring (i.e. the adjustment ring to vary the magnification) of telescopic sights.  They look something like this example, sticking up from the power ring of a Swampfox Optics Arrowhead tactical scope.  (Click any image for a larger view.) 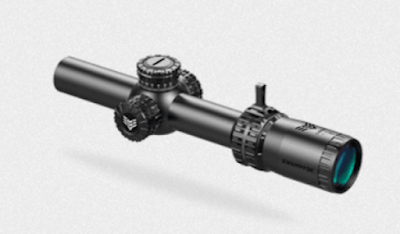 Regular hunting- and target-style scopes don't usually have throw levers, but they've become very popular on tactical scopes.  They allow one to adjust the power very quickly with one hand, rather than fiddle with a power ring that doesn't offer easy purchase or a visual or tactile reference when the scope is being held to one's eye.  There are third-party, aftermarket throw levers available, but they can be expensive, and they only fit a limited range of sizes.

I recently came across a fishing accessory, originally designed to attach reels to rods.  It's called a "Coaster", and is available in single and twin packs.  They're made by Breakaway Tackle in England, and look like this. 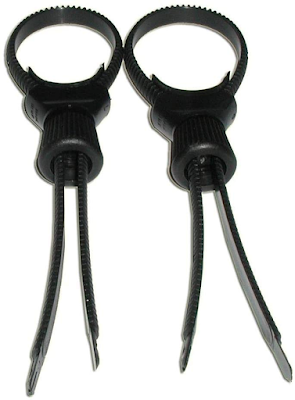 The loop is placed around the fishing rod, over the mounting lugs of the reel:  then the arms are pulled tight through the vice block before the ring is screwed down on the block, its threads engaging the notches on the arms to tighten them further.  It's a bit like a double-ended cable tie.

Some bright spark figured out that the same tool could be used as a throw lever on rifle telescopic sights that lacked such a feature.  Intrigued, I tried it, and found it works like a charm.  Here's how the vendor illustrates it. 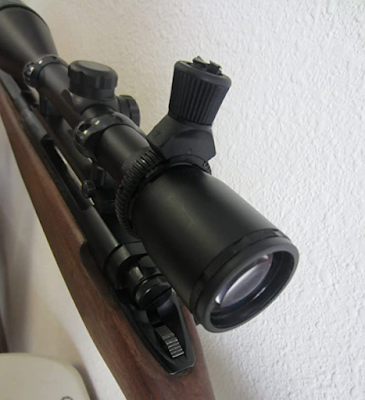 I modified that slightly, in that I cut off the arms a notch or so above the ring using cutting pliers, as low as I could manage, as illustrated above.  I then unscrewed the ring and took it off, cut the arms a notch or two shorter while holding the loop and vice block in place, and then reattached the ring and screwed it down moderately tightly (don't over-tighten it, as that will strip the threads).  That put the ends of the arms just beneath the surface of the ring, rather than above it, so they no longer scratched my fingers as I felt for the ring.  I found that a lot more comfortable, and it looked better, too.

Customer reviews warn that the plastic may stretch over time, but that's easily dealt with by tightening the ring when necessary.  I've considered using glue on the arms inside the ring, to stop anything coming loose, but so far I haven't needed it.  I'll hold off on the glue unless it proves necessary further down the road.

When attaching the Coaster, turn your scope's power ring to its minimum setting, then move it to its maximum setting, taking careful note of how far it turns from one extremity to the other.  Looking from the rear of the scope, it's usually from about 270 degrees, or west, moving clockwise through a half-circle to about 90 degrees, or east (with 0 degrees being straight up, or north).  Return it to the minimum setting, then fasten the Coaster to the power ring so that it sticks out on the left (west) of the scope at about the 270 degree setting.  When tightened down, it should make it much easier to grasp and move the power ring one-handed between finger and thumb while peering through the scope, moving the ring all the way over to the 90 degree point (east) on the right.  (If your scope's power ring moves the other way, or has a shorter range of motion, simply adjust the initial position of the Coaster to suit.)

If you ever want to take off the Coaster, simply unscrew the ring;  or, if you've glued the ring in place, just cut the plastic loop and the Coaster will fall off.

I'm delighted with how easy the Coaster makes it to move the power ring; and with the arms trimmed to below the surface of the locking ring, it looks good, too.  I've bought enough of them to put one on all my variable-power scopes (buying the twin-pack means they cost less than $6.50 each).  I highly recommend it.

There are competing products out there, but they all appear to be more expensive than the Coaster, so I haven't tried them.  YMMV, of course.

(EDITED TO ADD:  A reader e-mailed to describe a problem with a very low-mounted scope, where there wasn't enough clearance to allow the Coaster to fit.  Details and a photograph here.)

Peter, those were originally sold to the RV crowd as an adjustable, reusable, secure tiedown.

One point to mention, if you trim the ends, be sure to round them over and sand smooth... don't ask how I know.

Nice find, and a nice adaptation.

Zip tie at a fraction of the cost. But I'm a deplorable redneck.