I was intrigued to learn (courtesy of a post by SNAFU Solomon) about a modern adaptation of former Soviet T-62 tanks (first produced in the 1960's) by the Algerian Army.

I came across T-62's in the field, way back when.  They were impressive enough from an infantry point of view, but were less able to handle more modern, higher-technology Western tanks in combat, as proved in (for example) the 1973 Yom Kippur war, South Africa's Border War and other conflicts.  They were rapidly replaced in front-line service by the more modern T-72 tank and its derivatives.  Still, more than 22,000 T-62's were built, and there are several thousand still in operational or reserve use by many armies.  The Russians are reported to be using them in Ukraine at present, presumably in less active areas of fighting, so as to reserve their more modern (and more expensive) T-72's for the most critical areas.

The former Soviet Union learned several expensive lessons during urban and close-quarters combat in Afghanistan and elsewhere, reinforced by lessons learned in Russia during the post-Soviet era in, for example, Chechnya.  They led to the development of a tank-based infantry support vehicle;  a hybrid between an infantry fighting vehicle's weaponry and a main battle tank's level of protection.  Wikipedia describes the development of the BMPT Terminator as follows.

The history of the BMPT's development can be traced back to the Soviet–Afghan War. Combat experience during the lengthy war revealed that infantry fighting vehicles (IFVs) like the BMP-1 and BMP-2 cannot fully deal with infantry, despite the BMP-2's high gun elevation. Although main battle tanks (MBTs) possessed a high amount of firepower, the limited elevation and depression angles of the main gun made them easy targets in mountainous and urban terrain ... It was evident that a new vehicle concept was needed. The main requirements for this new machine were to possess large firepower, high angles of elevation and depression, and a protection equivalent to that of an MBT. An additional requirement that was meant to supplement the latter was enhanced protection from close-range hand-held RPGs.

The need for such a vehicle became even more evident during the First Chechen War. When using conventional armor during urban engagements, Russian forces suffered heavy losses in manpower and equipment, including the destruction of an entire mechanized brigade during the first battle of Grozny. While these losses cannot be entirely blamed on technology, it became clear that a dedicated anti-personnel fighting vehicle would provide valuable assistance in an urban environment. Self-propelled anti-aircraft guns were used as a temporary solution in Chechnya. However, these vehicles weren't well-armored and didn't possess the obstacle-clearing capabilities of an MBT.

When used in urban terrain, each main battle tank is to be deployed with two BMPTs. Outside of urban warfare that ratio is reversed with one BMPT protecting two main battle tanks. This results from the complexity of fighting in urban terrain and the need for a versatile anti-personnel platform that can engage multiple targets at once and on different height levels. The introduction of such a vehicle makes urban fighting less stressful on MBTs and can relieve them of some of the workload so that they can concentrate on their main objective of engaging other tanks and hardened targets. The BMPT's armor protection is equal to that of an MBT and its powerful armaments allow it to engage virtually any enemy formation while operating in a common battle formation. Thanks to the multiple weapons systems found on the BMPT, this vehicle is able to fire at multiple targets simultaneously. These features significantly help increase the combat effectiveness of tank units and decrease their losses from enemy close-combat assets.

There's more at the link.  Here's the current, second (upgraded) model of the Russian BMPT-2 (image courtesy of Wikipedia).  Clickit to biggit. 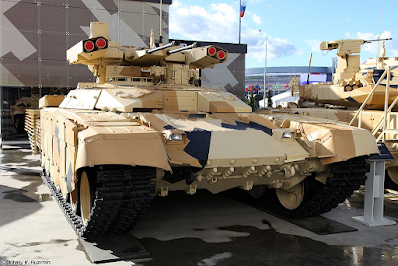 Obviously, new-production BMPT-type vehicles are going to be expensive.  However, lots of armies have older-technology tanks still sitting in their depots and parking lots.  They aren't capable of facing modern main battle tanks (MBT's) on the battlefield, but if modified along the lines of the BMPT concept, they may be very useful in urban and mountainous terrain to support infantry units, allowing MBT's to be reserved for their primary function.

Algeria bought several hundred BMPT-2's from Russia, and seems to have been impressed with their versatility.  It also has several hundred older T-62 tanks in its arsenal.  It now appears to be modifying the latter to be a slightly less potent, but nevertheless very useful (and much cheaper) version of the BMPT.  (You'll find a lot more historical and technical information about Algeria's T-62's and their upgraded version here.)  Algeria is applying the Berezhok combat module, a new turret developed to upgrade the BMP-2 infantry fighting vehicle developed for the Soviet Army in the 1980's, to their T-62 hulls.  The new turret uses a single 30mm. cannon and a single 30mm. grenade launcher rather than the two of each fielded by the BMPT, as well as four Kornet anti-tank missiles.

Here's what the upgraded Algerian T-62 "mini-me BMPT" looks like. 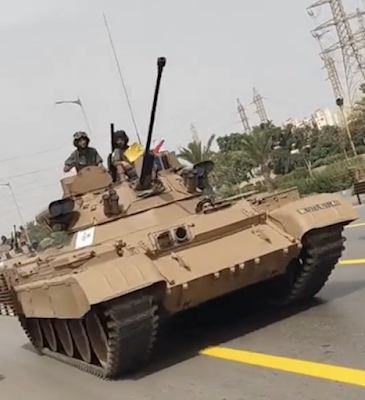 Tactically, this offers a whole range of possibilities in urban combat.  The high elevation of the 30mm. cannon means the vehicle can stand back from a building, scanning upper floors for any sign of a missile or rocket team intending to shoot down at advancing forces, and destroy the building around them before they can fire.  It's heavily armored enough to withstand small arms fire, and with vigilance by its crew and the use of add-on slat armor (often improvised in the field), it should be able to fend off at least a few strikes by rockets or missiles.  Its "Sunday punch", the four anti-tank missiles, are accurate and powerful enough to take out enemy strongpoints.  They can be fitted with conventional, hollow-charge or thermobaric warheads, and there may be enough room inside the T-62's hull to carry missile reloads.  By using the space formerly reserved for 115mm. main gun rounds, the vehicle can probably carry far more ammunition for its 30mm. cannon and grenade launchers than a typical infantry fighting vehicle, giving extended combat endurance before it's forced to withdraw to rearm itself.

I don't know whether BMPT-type vehicles have yet been sufficiently tested in actual combat to prove themselves, but it seems clear that more and more armies, including Algeria's, are seeing a need for something like them.  Close-quarters urban combat has long been a nightmare for military planners, because it chews up units, soldiers and weapons in a veritable slaughterhouse.  It's long been a scenario to be avoided at all costs, if at all possible.  Can the BMPT concept change that?  Can upgraded older MBT's gain a new lease on life as lower-cost BMPT-type vehicles?  The jury is still out, but it looks like an intriguing possibility.  We'll have to keep a weather eye out for more combat experience with them, and see whether they change the urban battlefield equation.

Meanwhile, thousands - possibly tens of thousands - of obsolescent and obsolete MBT's, even perhaps those dating back to World War II such as former Soviet T-34's (yes, some are still in service in the Third World), may have suddenly been given a new lease on life on the modern battlefield.  It'll be intriguing to see how many nations and their armies pick up on that.