A breath of fresh air (NOT!)


Fellow blogger aepilotjim forwarded a Facebook link to Miss D. and myself last night.  There, we found this: 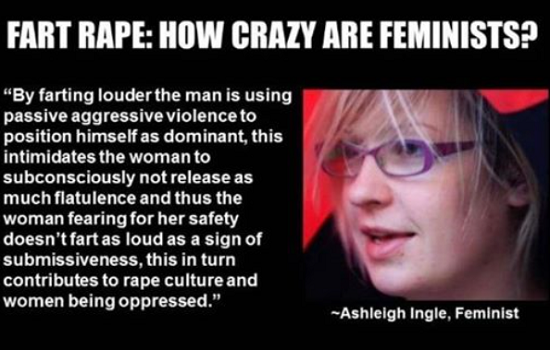 At first I was sure this was some sort of Internet hoax.  Surely no-one could be as stupid as that?  Lo and behold, an Internet search on "fart rape" soon proved that it was no hoax, as this 2013 report shows.

Top feminist academics that have respectable diverse doctorates from medieval art, 6th century English to Women’s Studies gathered at the University of Toronto meeting center to discuss if human flatulence could be sexist.

Ashleigh Ingle a proud feminist and an anarchist argued that because of patriarchal gender norms women were not allowed to release gas in public because of men’s unreal expectations of women to be clean and feminine. Furthermore she articulated that if a woman was to fart in the presence of a man and the man responded by farting louder than the woman, than that would be rape.

[The] twitter hash tag #FartRape has started to trend as women are taking control of their own bodies by naming and shaming men guilty of fart rape ... But Ingle argues that it simply isn’t enough, “Don’t tell women to fart louder tell men not to fart so loud” This is clear victim blaming and government should pass laws to make male farts above a certain decibel illegal to make human flatulence equal and not discriminate against women.

Science advocates have argued that because of sexual dimorphism men are larger, need a higher protein intake and thus can relieve more flatulence, but the speakers at the conference were adamant that it was a socially constructed gender norm that oppressed women to the point that they physically do not release equal amounts of gas as men.


There's more at the link.  The comments are also worth reading.

Clearly, it's bizarro-world in feminist circles.  However, the brouhaha appears to have aroused more amusement than hot air (you should pardon the expression).  In another article, I found my favorite comment on the matter.

Sorry all, I just can't stop laughing. I once ate two chili-cheese hot dogs and raped everyone at Sea World.


Perhaps I should have titled this blog post "Air on the G-string"? (With apologies to Bach and Wilhelmj, of course!)