I'm sure many readers have heard about the controversy in Portland, OR over police riot training material that allegedly included this slide (clickit to biggit): 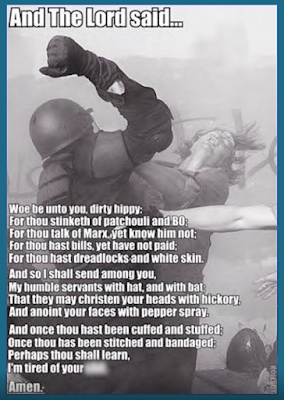 Notice that (as far as I'm aware) all the protests and outraged shrieks have come from the left of US politics.  There's a deafening silence on the right - largely because many on the right sympathize with the sentiments expressed in the slide.  I've so far discussed it in passing with several current and former law enforcement friends.  The universal reaction appears to be a giggle of heartfelt agreement.

It's hard not to sympathize with them, because police are deliberately targeted by the left.  They're publicly pilloried because they stand for law and order, things the left would prefer to remove from the political scene so that they can create mayhem unfettered by the long arm of the law.  They denigrate, slander and libel police at will, seek to defund them, threaten them, offer them physical violence - and then act surprised when their attitudes and actions bounce back on them, as expressed in that slide.  Frankly, I'm astonished that more police haven't refused to guard the mayor's home, or official council buildings, when the mayor and council are part of the attack on law enforcement.  As far as I'm concerned, if that's the way they feel, then let them find out at first hand what it's like when law enforcement isn't there to protect them.

That's also why it's worth getting to know your local police force, and ensure that they regard your immediate area as friendly.  If you "show willing" and volunteer to help law enforcement organizations and civic activities, wave a friendly welcome to cops patrolling your streets, and generally make it clear that you aren't a problem they need to worry about, you're very unlikely to fall foul of the attitudes expressed in that slide.  Also, if trouble should come to your town and you need to organize your own neighborhood to resist incursions by the radical left, let the local cops know about it ahead of time, and establish effective liaison with them.  Don't bother with top officials:  deal with the "cop on the beat", those living in, working in and responsible for your area, who'll have to put their lives on the line to defend you if it comes to that.  They'll know that in your area at least, they'll have backup and support.  That's worth gold to them, and more than gold.

Yes, there are problem cops;  yes, there are problem police forces.  We've covered both in these pages from time to time.  However, I still think the majority of cops are trying to "protect and serve", and doing the best they can under very difficult circumstances.  The easier and less stressful we can make those circumstances for them, the more likely we are to receive protection when we need it, and the less likely we are to engender the attitudes expressed in that slide.  I think that's a worthwhile objective.