On 4th October 1957, the Soviet Union launched the first satellite, dubbed Sputnik 1, into orbit, thus beginning the Satellite Age.  (The Space Age proper had begun some decades before, with the experiments of Robert Goddard and Wernher von Braun.) 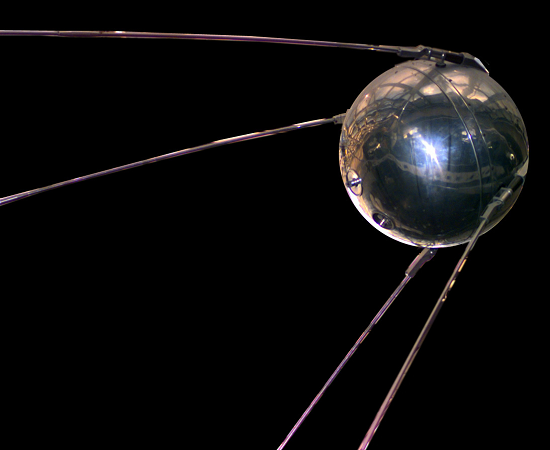 It caused an enormous stir throughout the world - even panic, in some quarters.  Here's a CBS News analysis, broadcast two days after it was launched.

It sounds rather over-the-top to us today, when we're accustomed to satellites being an indispensable part of our everyday life.

Sputnik 1 only remained in orbit for three months, but it was a harbinger of greater things to come.  The world economy today would grind to a halt without satellite services . . . but it all started with the "beep-beep-beep" of that tiny orbiting sphere.

One of the very few memories of my childhood is the near panic of the public when this happened. I was not quite 5 years old.

Spudnik: A potato in orbit?

I note that television science reporting hasn't improved much since 1957: "...beyond the reach of the Earth's gravitational pull."

Enjoy some filk with your historical anniversary:
https://www.youtube.com/watch?v=o-mZ9pKvCmk

And today, the Russians launch our personnel to the ISS. So WHO won the Space-race, again? ��

Will,
At least part of the concern was FOBS. If you could put Sputnik in orbit, you could put nuclear weapons in orbit as well. And back then with Stalin, there was real concern that if they were in orbit, they would be used.

Stalin was four years in his grave when Sputnik flew.