A sad reminder of the human cost of war


Yesterday I put up a link to a collection of photographs of aircraft and ships from World War II.  As part of the research that collection inspired, I came across the story - and a video - of Loyce Edward Deen, a gunner aboard a Grumman Avenger torpedo-bomber.

Aviation Machinist's Mate 2nd Class Deen was aboard an Avenger of Navy torpedo squadron VT-15, flying from the aircraft-carrier USS Essex, when his aircraft was struck by anti-aircraft fire over the Philippines on November 5th, 1944.  From a Web site set up in memory of Mr. Deen, we learn:

That day, Lt. Cosgrove received tail number #93 - an new plane just acquired in Ulithi Atol a few days ago. Lt. Cosgrove's orders were to go after the Japanese cruisers in Manila Bay.  After the briefing, Lt. Cosgrove joined his crew, Digby and Loyce, and they went topside to their plane. Loyce climbed into his gun turret for the final time. The VT-15 group took off mid morning and It would take about two hours to get to the Manila Bay and release the ordnance.

There, they encountered heavy anti-aircraft fire from a Japanese cruiser and Loyce was killed from two AA shells. In the 2001 History Channel documentary film  "Battle Group Halsey" interview, Capt. Cosgrove recalled, "Denzek told me over the intercom that Deen was hit bad.Then, Densek came back up thru the small passage way to sit in the cabin behind me. He stayed there until we landed."

Here's an image of Lt. Cosgrove's aircraft after it was hit.  The pilot is struggling to keep it flying, despite damaged controls.  Although the image is a little fuzzy, the damage to the crumpled ball turret at the rear of the cockpit can be clearly seen.  Mr. Deen, who was killed instantly, is still inside the turret.  (Click the image for a larger view.) 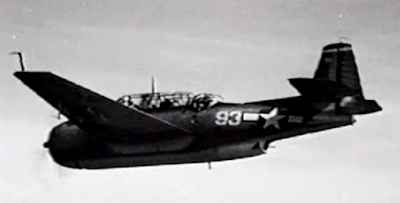 The pilot managed to land his damaged aircraft aboard USS Essex, where it was learned that his rear gunner was dead.  Mr. Deen's body was so badly mangled by the exploding anti-aircraft shells that it was decided it could not be removed from the aircraft.  Fingerprints were taken for identification, and his dog-tags were removed from around his neck.  The aircraft was then wheeled down the flight deck to the stern, without being stripped for parts (as was customary with damaged aircraft before they were pushed over the side, due to the shortage of parts and materials).  After a brief funeral service, attended by then-Rear Admiral Frederick C. Sherman, Commanding Officer of Task Group 38.3 of the Pacific Fleet, who was flying his flag aboard USS Essex, the entire aircraft was pushed over the side, forming Mr. Deen's coffin.  Two Avengers from his squadron flew overhead in salute.

The episode was captured on film by combat cameramen aboard the Essex.  Here's the description of the video clip from YouTube.

A Grumman TBF avenger torpedo bomber of VT-15 Torpedo Air Group, approaches and lands on the deck of the USS Essex (CV-9) during the Battle of Manila Bay, in World War 2. Upon landing, Lt. Robert Cosgrove (Pilot) and Sailor Digby Denzek (Radioman) can be seen in their respective forward and middle crew positions. But the rear gunner position, occupied by Aviation Machinist Mate 2nd Class,Loyce Edward Deen (Gunner) has been completely destroyed by enemy 40mm shell fire. As the aircraft is parked amongst others, with wings folded, sailors of the Essex take fingerprints and cut dog tags from the body of AMM2C Loyce Deen in the gunner position. Captain Carlos W. Wieber, Commanding Officer of the Essex, and her crew, participate in funeral services on the deck. A chaplain conducts the services from beside the aircraft, where Loyce Deen's remains in the gunner's position have been shrouded. Closeup view of Rear Admiral Frederick C. Sherman during the burial service. A bugler sounds taps. Beside the bugler is David L. McDonald, who was XO of the USS Essex (and later Chief of Naval Operations in the 1960s). Deen's remains are then buried at sea in the TBF avenger in which he perished. The aircraft floats off the fantail for a short time before sinking from view. Two TBF Avengers are seen flying overhead , in tribute. Crew members then disband and return to their duties. Location: Manila Philippines. Date: November 5, 1944.

May the souls of Loyce Edward Deen, and of all those who died in defense of freedom in World War II, rest in peace.

I've witnessed several burials at sea, but never one like this.

That brought tears to my eyes.

I was tearing up when this started playing, but just lost it when I realized that they were rolling his fingerprints.

Anyone wonders why carrier aviators tend to have a live now attitude should watch this.

Only thing worse I ever saw was a B17 landing with the belly turret still deployed, with the gunner still alive. Enough said about that particular moment of hell.

The ball turret doesn't retract on the b-17, like some others. It was the tail gear that wouldn't extend. The main problem was they couldn't roll the turret to align the access hatch for the gunner to exit. (I'm not clear if a gunner can exit directly to air, but his parachute is carried inside the fuselage, due to space constraints)

They didn't have the tools needed to un-jam the mechanism, or cut their way into the turret. IIRC, they also tried to drop the turret, but, again, lack of needed tools stymied that. I wonder how many aircraft carried appropriate tools after that incident, or gunners squeezed handguns into that tight space?

They did what the had to. Brave men, given the honorable burial at sea.

Dang, I teared up watching that one, I think we were made of sterner stuff back then. I supposed the Great Depression followed by WWII made sure the snowflakes didn't survive and the people that did live had steel in their spine.
After watching that, I fervently hope those that participated are resting in peace.