The war seemed all but over. Germany had surrendered in May, and much of Hiroshima and Nagasaki were in ruins, decimated by atomic bombs dropped the previous week. If Yellin heard a code word — "Utah" — Japan's rumored surrender had occurred, and he was to cancel his mission and return to Iwo Jima, a rocky island that he had helped secure months earlier and that offered a base for American bombers headed north to Japan.

Later that day, on what was still Aug. 14 in the United States, Emperor Hirohito announced Japan's surrender. For some reason, however, Yellin and Schlamberg never got the message.

Taking on antiaircraft fire in their P-51 Mustangs, they strafed their targets and headed home, passing through a thick bank of clouds. Schlamberg, who had previously admitted a sense of foreboding to Yellin, saying, "If we go on this mission, I'm not coming back," never emerged from the haze.

Disappearing from Yellin's wing, he was presumed dead and considered one of the last Americans to be killed in combat during World War II.

Yellin, who landed on Iwo Jima to discover that the war had ended three hours earlier, and who later became an outspoken advocate of veterans with post-traumatic stress disorder, died Dec. 21 at his son Steven Yellin's home in Orlando, Florida. He was 93 and had lung cancer, his son said.

For Yellin, the war was a hellish necessity, essential for halting the spread of Nazism and Japanese aggression. But he also spoke forthrightly about its costs, including the mental anguish over memories of combat that nearly led him to suicide. He recalled with particular horror the experience of landing on war-torn Iwo Jima for the first time, where "there wasn't a blade of grass and there were 28,000 bodies rotting in the sun."

"The sights and the sounds and the smells of dead bodies and the sights of Japanese being bulldozed into mass graves absolutely never went away," he told the Washington Times in August.

I encountered Captain Yellin several years ago, in the pages of a remarkable book describing his reconciliation with Japan and its people through a marriage between two families.

It's the story of how his son fell in love with a Japanese woman, and how Capt. Yellin had to come to terms with that, given his wartime attitudes towards them.  A meeting with a Japanese war veteran fighter pilot opened up new vistas on their shared humanity.  I won't spoil the book by telling you more, but it's worth a read.

Capt. Yellin most recently (just a few months ago) published an account of his war experiences. 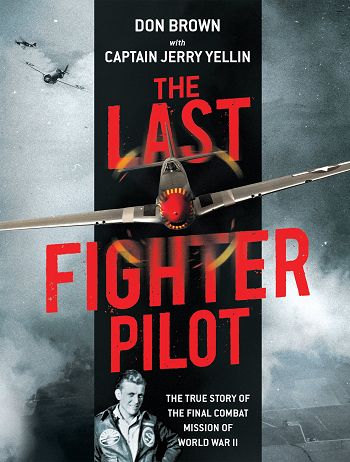 EDITED TO ADD:  Thanks to commenter Sam L. below, I was led to this lengthy discussion of Capt. Yellin's wartime service, and of his final mission.  That blog also provided a link to this video clip of Capt. Yellin.  Thanks, Sam!

I recently heard an interview with Captain Yellin on the Federalist Radio Hour. It waqs quite interesting.

Amen. May God comfort and bless his family.

May he rest in peace!

Interesting perspective.
My Dad landed w/ the 3d Marine division during the invasion of Guam. He was wounded during a scouting patrol on 22/08/44, evacuated to Pearl and eventually to Bethesda for surgery. Upon recovery he re-upped twice.
He told me he would like to revisit the island but health concerns made this impossible. He passed away in 2003 and is now resting at Arlington.

Wm. Manchester recounts his service as a young Marine in the Pacific Campaign in his memoir "Goodbye Darkness".

Thank you all, gentlemen.

Thank you for the history lesson...lest we forget...and so we remember.

In a bit of bitter irony, I finished reading The Last Fighter Pilot the day Captain Yellin passed away.

Chapter ten, "Massacre of the Night Fighters" is one of the most chilling accounts of how brutal the fighting was during the Pacific war.

You're welcome. I encourage all to read all of John Mollison's blog and watch the videos, too.

The reason that the Pacific War is so universally referred to as "brutal" is due to the Japanese Army martial training that emphasized that surrendering was cowardly, and a great loss of "face". As a consequence, their treatment of Allied prisoners was horrendous from day one. Their habit of arming injured personnel to attack soldiers and medics was quickly noted. It didn't take long before US forces essentially refused to accept surrender from any Japanese that were conscious. This was not official policy, of course. It wasn't written about by soldiers, or discussed in public when they got home. It was the reason that Gen MacArthur would not accept any Pacific veterans for Japanese Home Islands Occupation duty. Only those from US Continental or ETO areas were used. He knew that that level of animosity would be an insurmountable difficulty in an attempt at restructuring the Japanese culture. If you wondered why some of those old warriors wouldn't drive Japanese cars when they got popular, well, now you know.