Here's a cause very worthy of our support


I'm sure most of my readers aren't familiar with the name of Wil Caligan.  He's a cartoon/comic artist who's just run headlong into the social justice warriors infecting the comic industry with their version of political correctness.  You can read all about it, and see screen captures of some of the comments, at that link. 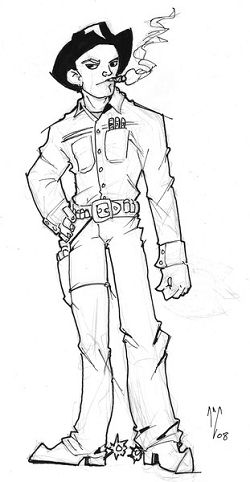 Some examples of Wil's art may be seen here, among other places.  I particularly like the black-and-white drawing on the left, for reasons that should be obvious to readers of my Ames Archives Western novels.

In Caligan's case, he made the catastrophic mistake of voicing his opinion about a pop culture story about a straight man rebuffing a kiss from a transwoman.

A few weeks ago, rapper Ginuwine was caught in an uncomfortable situation where a transgendered male-to-female tried to kiss him. When he rebuffed the advances, the internet accused him of transphobia. The lesson here seems to be that if Harvey Weinstein tries to kiss a woman, that's assault. But if a transgendered person tries to force someone to kiss him, there is a requirement for the victim to prove a lack of transphobia by complying. Caligan posted his thoughts on this situation and then all hell broke loose.

Caligan's views on science and gender are not unique. Most people know that sex is based on genetics and DNA, and gender is a grammatical term used by the trans activists to confuse the issue. But even stating that pedestrian view jumpstarted a witch hunt.

This doesn't seem like a  proportional response. But where LGBTQWTF feelings are concerned, no depth is too low to sink. No person is too honorable to defame with epithets, even a Special Forces veteran of two wars who contracted a desert illness fighting for the rights of overweight gender-confused half-wits to speak their minds from Mommy's basement. Malikali Shabazz, a person who is supposed to be a fellow comics artist and a peer of Caligan's, is a real peach.

Shabazz believes that heterosexual men are "transphobic" because they won't have sex with other men. No, seriously. You're not allowed to be straight anymore. The LGBTQWTFs once told us that they just wanted to live their lives. Today we are required to participate in their sexuality (whether we consent or not) or face the firing squad.

As a result of Caligan's standing up for his (Christian) beliefs and a medically and scientifically accurate perspective on such matters, his relationship with Short Fuse Media has been terminated.  However, many (including myself) feel that he's the victim rather than the offender.  We've teamed up to do something about it.

A one-week fund-raiser has been launched.  It'll raise funds to produce one or more of Wil's comics through an independent publisher.  Several authors, including Lawdog, John C. Wright, Nick Cole and myself, have offered some of our books for 'conversion' to a graphic novel format, free of charge, to show our support.  You'll find the full list at the fund-raiser page.

This is a special one-week campaign designed to provide work for Will Caligan, a military veteran, a Christian, and a comic artist who was swarmed by SJWs and lost his publishing arrangement due to his willingness to stand up for his beliefs about right and wrong. All of the funds raised will go to paying for the production of one or more comics illustrated by Will that will be published by Arkhaven. The graphic novel – or novels – will be based on novels chosen by the backers that have been contributed by various authors, and comics legend Chuck Dixon will be providing the adapted scripts for free. A Gold-rate team of colorists, Arklight Studios, will provide the colors for the cover at a steep discount.

The precise size of the graphic novel will depend upon the novel adapted, but it is expected to be around 132 pages. Will Caligan’s comic will be published in a series of 22-page comics and as a single graphic novel, in black-and-white format with a full color cover. A color interior is one of the stretch goals.


Again, more at the link, including more examples of Wil's work.  The initial objective, for a single graphic novel drawn in black-and-white, with a full-color cover, is just $7,500.  If the top stretch goal of $35,000 is reached, it's hoped to produce two graphic novels with full color interiors.  I think that's entirely do-able, with everyone's goodwill and support.

I've already contributed to this fund-raiser in cash, as well as by donating the rights to one of my books if the backers should vote to select it for production in graphic format.  May I appeal to you, dear readers, to please do the same?  I think this is a cause, and an artist, eminently worthy of support.

EDITED TO ADD:  Wow!  The fundraiser blew past its initial target of $7,500 a mere 149 minutes after going live - less than two and a half hours!  At this rate, we might raise enough to publish all seven novels on offer in graphic form!  Thanks to everyone who's contributed so far;  and, to those who haven't, please join us.  Let's make this a smash hit!

I was just looking at Short Fuse Media. They have a bunch of tweets on their front page as to how Mr. Caligan was not fired. I don't tweet, but your cause seems just.
Will try to donate after I get home.

I'd say "Fuck the SJWs," but apparently that's what they want. so instead, they can just go to Hell.

I was looking at the site, surprised by the amount already. My husband glanced at it and asked for the story.

Then he decided he wanted an actual hard copy.

In for a hundred. Great Christmas present for my son. got that box ticked well ahead of time. He'll get as least as much of a pleasure out of poking the SJWs in the eye as he will the book, too.

The lesson here seems to be that if Harvey Weinstein tries to kiss a woman, that's assault. But if a transgendered person tries to force someone to kiss him, there is a requirement for the victim to prove a lack of transphobia by complying.

So the new Word Of The Year is now "Cisphobia", an unnatural fear of being normal.