It seems that despite the somewhat fearsome reputation of the breed, not all Rottweilers are as savage as some would have us believe. The Daily Mail reports:

You probably wouldn’t pick a ten-stone [140 pound] rottweiler to nursemaid orphaned bunnies and birds. But even kittens are in no danger from Dave the Dog. All he wants to do is look after them.

‘Dave just walked over to him and started licking him to clean him,’ said the 25-year-old, who runs a pet shop in Blackpool.

‘They bonded straight away. Now they sleep together, and I’ve even seen them sharing each other’s food.’ 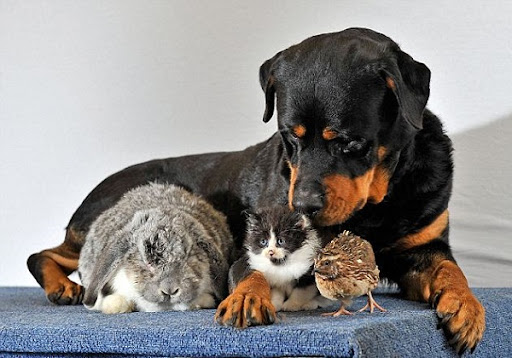 Miss Collins, who has looked after a menagerie of abandoned animals, soon found this wasn’t a one-off.

'When I brought home the ducklings, I thought he might not be the same as with the rabbits, but he just went over to them and licked them on the head,' she said..

All together, now: Awwwww!

It's more the owners that are the problems with that breed, not so much the dogs. If they're raised right, they're very protective of their family and very gentle.

Auntie J: How very, very right you are; as the bumper stickers say, "Blame the Deed, Not the Breed". Every Rottie I've met has been a big teddy bear--same with Dobermans, American Pit Bull Terriers, American Staffordshire Terriers, Boxers, American Bulldogs, etc., etc.--the list of banned breeds and so-called-but-not-really-vicious breeds goes on and on, and it's all kneejerk nonsense.

Peter, if you want a fine (and very regularly adorable, with plenty of videos) example of a pit bull who wouldn't hurt a mouse, check out Pit Bull Sharky at youtube.com/texasgirly1979--or visit my house and our AmStaffs sometime! :D

Mm, so true - Rottweilers tend to be sweethearts by nature.

Story reminds me of my dog - not a Rottie, but a large, intimidating-looking dog. He found two kittens that someone had apparently decided to dump by the side of the road and decided to adopt them. He adored them, and was so careful (they were so young they couldn't even quite eat solid food yet), playing with them, holding them down with one paw to give them lick-baths - and they loved it. The one kitten rarely purred except when he was being cuddled by his big adoptive dad.

Now they're both big, grown cats, and they still like being cuddled and washed just as much as ever. They'll mimic him, jump on him if they think he's not giving them enough attention, and lay down on the floor with him, wrapping their paws around his nose and rubbing their faces against him.

Kodos is the same way- he instinctively dotes on any young thing, kittens, puppies, and humans included. When we took him to the dog park regularly he'd adopt any child under ten or so.

I've met a lot of Rotties. The majority were like Dave- big, sweet, protective lunks. (But should you threaten their charges, you wouldn't like them when they're angry.) The minority- badly bred, badly raised, or both- are what make for the breed's reputation overall.

LabRat: The minority- badly bred, badly raised, or both- are what make for the breed's reputation overall.

Much like other vilified breeds, the media plays a huge role in creating the vicious image--any big black and tan dog becomes a Rottie, any short-coated muscular dog with a medium/large head becomes a pit bull; assumptions are made, stories are exaggerated, prejudice and stereotypes are propagated...

The worst assault I ever faced from a Rotty came when they decided I'd slept enough, and let themselves in to greet me good morning. Happy dog feet clambering all over the guest bed, wet kisses and sand brought in on its paws getting everywhere as I woke up and tried to get it off me, bright sunlight blinding through the open door, loud happy dog right by my ears...

Horrific, horrific assault, I tell you.

Hello, and Thank you for your comments about our Dave, he was the most fantastic dog we have ever owned, Sadly dave was PTS 5th dec 2011 he had a inoperable bone growth in his neck, also Wednesday died on the 7th of a broken heart.. We're happy both boys are together again. And again, thanks for all the comments. Miss Collins.