So-called 'narco-subs' (submersible craft used to smuggle illegal drugs) have been with us for quite some time. However, they've never been true submarines. They could ballast themselves down into the water to lower their profile, making them very hard to detect, but they couldn't submerge. 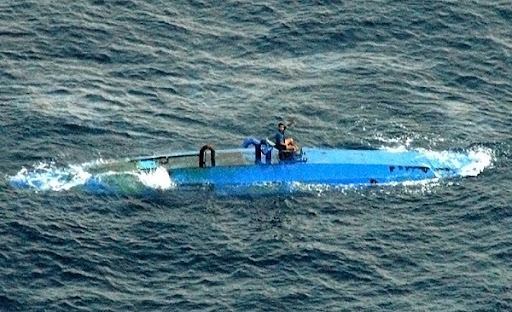 This has changed. Last year a working submarine (i.e. one that could actually submerge) was found in Ecuador. Another was found in Colombia today. The BBC reports:

The 31m-long (100ft) fibreglass vessel was found hidden in a jungle area in Timbiqui, in south-westernern Colombia. 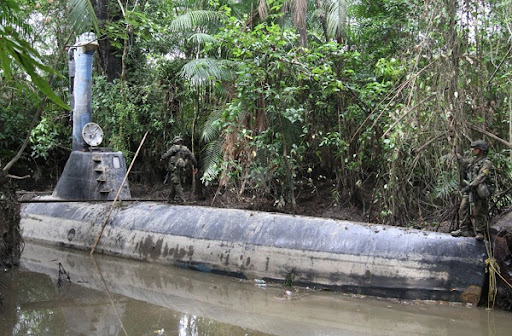 Navy officials said it was the most sophisticated submarine they had found so far, capable of travelling 9m (30ft) below water. 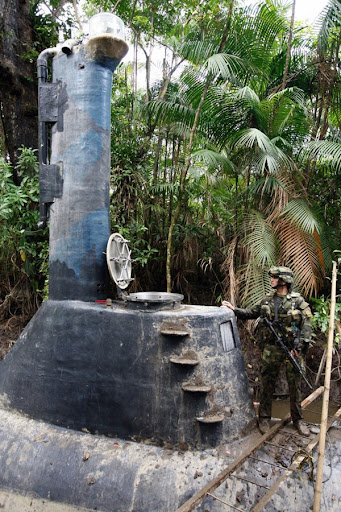 The officials said it could carry four people and up to eight tonnes of cargo, and was ready to launch.

Clearly, this submarine can't be fully submerged. It uses diesel engines, and the long pipe or 'snorkel' behind the conning-tower must be above the surface to allow air to enter the hull, otherwise the engines will consume all the oxygen in the air and then cut out (asphyxiating the crew in the process, of course). However, since the entire hull and conning-tower can now be submerged, only the tip of the 'snorkel' will be visible above the water, making it much harder to detect visually or on radar.

I daresay the time can't be far away when the drug trafficking syndicates will install batteries, or some other air-independent power supply, to make their smuggling submarines able to submerge fully. That'll be costly, but it's a relatively minor expense compared to the billions of dollars of profits to be made from the trade in illicit drugs. Once the cartels move to that level of technological sophistication, tracking their submarines will become almost impossible for law enforcement agencies.

The detection and interdiction of submerged vessels is and always has been a job for the military; but there'll be all sorts of legal complications if navies start depth-charging or torpedoing unknown submerged vessels, simply because they suspect they're smuggling drugs. What happens the first time they sink a submarine belonging to another navy, which just happens to be in the wrong place at the wrong time? Furthermore, what happens if a drug cartel invests some of its profits in buying an old submarine (perhaps for 'scrapping') from a Third World navy, and/or manages to find a few old torpedoes that can be serviced and prepared for use? The Argentinian cruiser General Belgrano was sunk by a British submarine in 1982 using Mark VIII torpedoes that first entered service as long ago as 1927! Similar weapons might be purchased by the cartels, and used against ships trying to intercept their drug shipments. Then we'd really have a War On Drugs!

To understand why and how drug-smugglers turned to submersibles, I recommend a 2009 VBS video documentary. It doesn't cover the latest developments, but it provides useful background information. Here's Part 1.

They were picking up German snorkels on radar in WWII. And that thing is probably noisier than a Metallica concert to a modern hydrophone.

As much as Maggie took a cruiser with all hands (with Mk VIIIs) and didn't give it back, I doubt anyone on the SS Bag o' Coke would have the skill to fire one to any effect.

Also, what Loren said; I doubt a vessel like that would be noticeably difficult to track, even if detection was difficult.

Anyway, it is ironic that narcotics smugglers would create a fertile ground for naval innovation.