An unexpected threat to Chinese warships


I was intrigued by a report in Australia about an unexpected maritime hazard in the South China Sea.  A tip o' the hat to reader Snoggeramus for sending me the link.

BEIJING has discovered a major threat to its new aircraft carrier: swarms of deadly jellyfish. Now it’s racing to develop weapons of mass destruction to beat them. 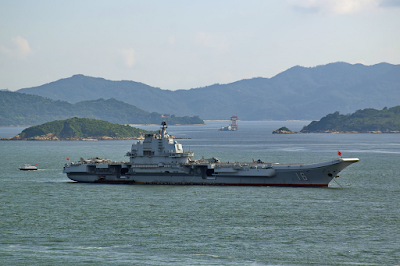 
Masses of the creatures can be sucked through the warship’s water intakes necessary for cooling the vessel’s engines.

Once in the cooling vents, they get mashed into a thick, sticky soup.

This blocks the cooling system, causing the engines to overheat and bringing the warship to a halt.

It then reportedly takes days to clear the pipes.

Thus the urgent need for countermeasures.

The new jellyfish shredder consists of a net, several hundred meters long and wide, which is towed by a tugboat ahead of the carrier.

This funnels whatever falls within towards an array of steel blades.

What comes out the other side is no larger than 3cm wide.

The effect is so brutal researchers report the waters the shredder passes through become murky as the jellyfish — and other marine life — corpses begin to decompose. It takes up to a week to clear.

The jellyfish swarms are a sign China’s waterways are becoming increasingly unhealthy.

The fish that usually eat juvenile jellyfish are themselves ending up on dinnerplates.

And the mass environmental upheaval caused by China’s enormous island reclamation project — which has destroyed many South China Sea estuaries in order to create military outposts — is only beginning to be understood.

I'm afraid the deliberate destruction of marine life to accommodate the ship is characteristic of attitudes towards nature in, not just China, but most of Asia.  The prevailing attitude in many of the countries and cultures there seems to be that nature exists to serve human interests. If it doesn't, it must be tamed, reshaped, or removed until it does.

Sucks to be jellyfish, I guess . . . or any other fish swimming near them!

Yah know, someone could weaponize this. Deliver a cloud of some polymer that does the same.

Sounds like a significant tactical vulnerability. Kill the tug, and the carrier can be immobilized.

An immobile carrier can't launch or recover planes, unless the ChiComs have copies the F-35B.

If they played their cards right, they could have the world's largest floating sushi bar.

which leads to the obvious question: does the US carrier fleet have the same problem, and if so how do they deal with it? I don't see them being escorted by jellyfish net tugs.

Simple answer: yes, it is a problem for US ships. I've been on watch in the engine room of nuclear powered vessel at anchor which came within a few seconds of losing all electrical power because of small jellyfish. I've also seen surface feeding schools of fish (Leiostomus xanthurus ) clog condensers such than we could not make full speed. A couple of hundred pounds of fish were removed from the main engine condenser, and there was a three inch layer of fish bones to be pulled from the tube sheet. Smelly work.

If these are the main condensers that are getting clogged it looks like a "don't know you don't know" problem for the Chinese.

If you have no history designing and building large oceangoing steam plants your engineers don't know to design around this kind of problem...

I don't know why, but I think of Sushi.