OK, warbird fans, you can geek out now

AirCorps Aviation of Bemidji, Minnesota has just announced that they have acquired a massive trove of original manufacturing drawings for North American Aviation (NAA) covering types such as the P-51, T-6, B-25 and P-82. 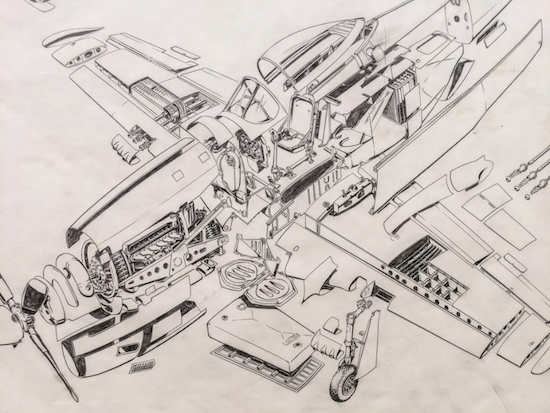 Ken Jungeberg was the head of the Master Dimensions department at Columbus in 1988 when the factory closed its doors. When he heard that North American was planning to burn all the WWII era drawings in their archive, he knew he had to do something. He began writing letters and making calls to his superiors, advocating to save the drawings. Discouraged by responses that there was nothing he could do, Ken had all but given up, until a twist of fate changed everything.

A situation that would have been a tragedy under normal circumstances turned positive when a pipe burst in the archive room that stored the drawings to be destroyed. The room all but filled with water, cracking the cement foundation, and soaking the contents of the room. North American employees emptied the room, and piled the soaking wet drawings in a heap on the factory floor, where they sat for the next two weeks.

It was at the end of these two weeks that Ken got the call he had been waiting for. He was told that he could have the drawings, if he came to pick them up immediately, and promised that they would never end up “blowing around in a landfill”. Clearly the company was still concerned with preserving the name and reputation that North American was known for. Ken rented a truck and he and several friends loaded the drawings, and took them to a barn where Ken began the monumental task of laying them out to dry. Because the drawings were done in pencil on tracing vellum (a very durable media), the information was essentially undamaged.

Once the drawings were dry enough, Ken sorted, re-rolled, and boxed them up. He took many to his home, and stored the rest at his hangar at the Warren County Airport in Lebanon, OH. The drawings would remain in this same location for the next 32 years, until 2019.

Ken has done the vintage and legacy aircraft community a great service through his persistence, and understanding of what these drawings would mean in a historical context.


There's more at the link, including some very interesting historical photographs.  The blueprints really are works of art, as well as engineering and manufacturing references.

That's an amazing aviation legacy.  One could take these blueprints and use them as manufacturing guides today, starting from scratch to produce a brand-new aircraft.  Of course, having someone make the parts would be difficult and expensive, but with the original blueprints, it's entirely feasible.  I wonder how many warbirds will be kept flying thanks to the ability to make new parts for them or rebuild them, courtesy of this historical and technological treasure trove?

I have always wanted my own P-15 in flying shape. But they're millions to buy and essentially millions to fly and maintain. It would have been high on the list if I ever tripped over a treasure chest.

Sadly, no parts were ever again made from these drawings because Colt owned the TDP, H&K sued over trade dress and Grumman over the trademarked name...

Thanks for this post. I have old NATOPS manuals for the P2V’s and Pb4Y-2’s,
Both of which I once flew as an air tanker pilot.
Now I know what to do with them.

I want to get a look at these drawings! It doesn't mention that the man that saved them has also done some digitization campaign, but I hope someone can fund such a thing.

Aircorp is in my hometown and I've been in their shop. They do amazing work and are a valuable asset to restoring vintage aircraft.

Wow! Good for him wanting to preserve these blueprints. I wonder if some parts can be 3-D printed?

The P-82/F-82 Twon Mustang would be nice. My heart lusts after an F7F Tigercat. It's nice to have a dream.

I will geek out when they offer the complete sets to the above on digital media, complete, per each A/C.

At that point, it'll be "Take my money!"

Between plane geeks, home-built hobbyists, and 3D printing aficionados, the prospect of a veritable fleet of P-51s cropping up below current surplus warbird prices moves to metaphysical certainty, on the order of classic car clubs.

(Gee, lemme think...get crotch-groped and wait two hours to fly at 550MPH in a cattle car, or go myself at 400MPH in a homebuilt Mustang? Decisions, decisions...)

And then people will start to tweak the design, and upgrade with modern materials and components. (M2 BMGs optional.)

When/if someone can get the plans to the Douglas A-1 Skyraider and the Vought F-4U Corsair, it's gonna be like 2005 with AR-15s.
And I will have to write new lyrics to Johnny Cash's "One Piece At A Time".