One of the giants of the cinema screen has left us.  Kirk Douglas died yesterday at the age of 103.

If you don't know much about him, you can read his potted biography on Wikipedia.  I highly recommend his first book and autobiography, "The Ragman's Son".  It's from the 1980's, and therefore leaves out the last three decades of his life (and was superseded by later accounts), but in my opinion it's his best work. 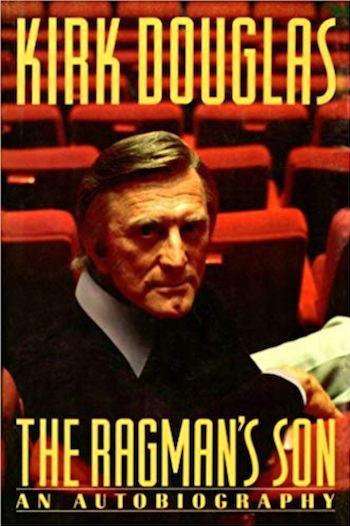 His movies were a source of enjoyment and inspiration to millions.  I'll never forget such classics as "Spartacus", "The Vikings" and other early works.  He towered above most of his contemporaries in Hollywood, and even in retirement his influence was profound.  There will not be another like him.  It's almost impossible to say that anyone was "unique", but he comes close.

To celebrate his life, and commemorate his death in movie fashion, here's the final duel from "The Vikings".

Thanks for the memories, Mr. Douglas.  May you rest in peace.

Labels: Art, Entertainment, History, In Memoriam, Thank You
Email ThisBlogThis!Share to TwitterShare to FacebookShare to Pinterest

I agree completely. He was great actor, a great entertainer. And he had a very good run at life.

A true great from a time when Hollywood made movies for adults.

Unlike Cory Booker, I am Spartacus!

On the lighter side, don’t forget The Villian! A movie with Kirj Douglas and a supporting cast of extremely funny and talented actors. This should be prescribed therapy for the February Blues.
Dorothy

Something sort of heroic in his look; a bit like the King's Champion cover.

I had an English teacher in college who looked a LOT like Kirk.

I've not seen anyone mention is part in "In Harm's Way". He did a heck of a job as the navel officer with demons.

Spartacus has left the building.