I note that date palms with Biblical-era genetics have been grown from ancient seeds.

Scientists have cultivated plants from date palm seeds that languished in ancient ruins and caves for 2,000 years. 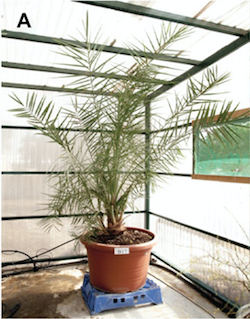 This remarkable feat confirms the long-term viability of the kernels once ensconced in succulent Judean dates, a fruit cultivar lost for centuries. The results make it an excellent candidate for studying the longevity of plant seeds.

From those date palm saplings, the researchers have begun to unlock the secrets of the highly sophisticated cultivation practices that produced the dates praised by Herodotus, Galen, and Pliny the Elder.

"The current study sheds light on the origins of the Judean date palm, suggesting that its cultivation, benefiting from genetically distinct eastern and western populations, arose from local or introduced eastern varieties, which only later were crossed with western varieties," the researchers wrote in their paper.

"These findings are consistent with Judea's location between east-west date palm diversification areas, ancient centres of date palm cultivation, and the impact of human dispersal routes at this crossroads of continents."

I'll be very interested to see whether there's any genetic link between the Judean dates and more modern varieties such as Medjool.  Dates from ancient Israel were known throughout the ancient world, and highly prized.  Can a resurrected (you should pardon the expression) Biblical-era date offer competition to modern cultivars?

I'm wondering the same thing. It seems that a lot of the taste has been bred out of modern cultivars of just about everything for the sake of storage longevity, disease resistance, resistance to shipping damage, productivity and even appearance. That's why I grow mostly heirloom vegetables. I haven't found many hybrids that even come close to the taste of the old timers. I still grow a few hybrids every year, though. Just in case............

This creates an entirely new meaning for 'save the date'.

I was surprised to not hear about preservation of the species.

It will be interesting to find out!