In their book "The Day the Bubble Burst", Gordon Thomas and Max Morgan-Witts examine the human side of the 1929 stock market crash that precipitated the Great Depression. 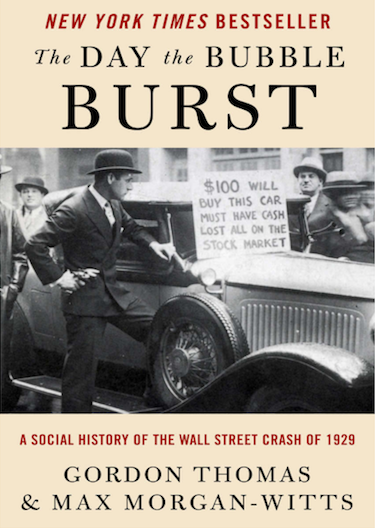 There are many parallels between the behavior of markets and individuals prior to the Crash, and those we see today.  The divide between the "haves" and the "have-nots" is at least as pronounced today, if not more so, and of course there are many more people in the country - and the world - to be affected by such divisions.  Attitudes are also very materialistic, the focus entirely on worldly reward and material wealth.

I recommend "The Day the Bubble Burst" as a very well-written snapshot from our nation's history of what happens when greed and hubris slam headlong into reality.  I fear we may be close to another such episode in the not very distant future.  Sadly, I don't think those in charge of running our country have learned much in the interim.

Here's the book's view of the consumer society ninety-odd years ago.


Recognize any parallels between 1929 society and our own?

Yep, we are right back there again... sigh

...either that, or American society has pretty much always been the same.
Pretentious, profit-obsessed and "ready-and-wiling-to fleece whoever they can"
...hedonistic and concerned only with satisfying immediate desires.

Oh ...and status-obsessed as well. Judging others via stereotyping and pigeonholing.

Peter, great recommendation.
I would add Frederick Lewis Allen's Since Yesterday and Only Yesterday as social histories of the 1920's and 1930's that show similarities between then and now.
I just completed financial journalist Joe Nocera's "A Piece of the Action" that describes how credit and financial products have become part of the life of middle class Americans over the past 50 years.

When you look at it, you can pretty much lay the blame on the Dems.

Maybe not in 1929, but dem fiscal policy back then sure helped.

I am referring to more recent times.

It was the Dems (and McCain) who forced the sub-prime lending/mortgage crisis that crashed the US economy in 2007/2008.

And it was the Dems (and McCain) who forced the same sub-prime (because of discrimination was the reason) lending process that has given us cars with 10 year loans, and once again, mortgages that are under water. And all sorts of new wage and earnings laws that make it impossible for the peasants at the bottom to climb out of their holes in order to become un-peasants. And changed student loan laws to encourage idiots to get idiot degrees at idiotic prices for a job serving fries that the idiots then protest minimum wage laws as being too low so the companies automate and the minimum wage jobs go away.

Whew. That was a finger-full of typing.

Create the impending crisis because 'fairness.' And then when the crisis hits blame it on 'the fat cat Rethuglicans.'

Hmmmm... wonder who the real fat cats are?

Oh, to be removed by a blog administrator must have been foul. I guess it was spanked. Good for you Peter 'iffn it was you. I firmly believe we as a society and country is heading for a Depression that will make the 20's/30's look like a school yard fracas. Prepare as best you can.

Oh, I could only dream of being removed by a blog administrator. Oh what wondrous prose I would have to come up with to achieve this.

I did my high school American History paper on the crash of 1929. The one thing that stands out in my mind was the phrase, used back then to dismiss people who were voicing concern, was that "We've reached a new, permanent high plateau".

And I hear that today.

I Feel Like Sarah Connor: The Coming Financial Collapse
https://redpilljew.blogspot.com/2019/04/i-feel-like-sarah-connor-coming.html

And FYI, Peter, among the links I cite in support was one of yours. :)

An Old Fashioned Girl by Louisa May Alcott features a plot device in which a profligate family (No Madison Ave) was brought down by a Crash. Published 1869.

Cheaper By the Dozen tells the story (late 1800s - 1930s) of the Galbraiths with 12 kids and a world-famous efficiency business. The family never got trapped by Madison Ave.or destroyed by the 1929 Crash.

But they did have the rise of youth culture (jazz, dating, and trashy dress), Social Christianity and proselytizing Birth Control movements.

I wonder what that other book is leaving out? Quite a lot, I suspect.

I'm thinking that the American economy will survive this time of chaos. They will jump into the void left by Chinese businesses gone bust, and take over manufacture (whether authentically in America, or in India/other places).

We have a lot of 'give' in our budgets. Smarter consumers/businesses are operating on a leaner model, paying down credit debt and upping savings. No one NEEDS cable or multiple family phones. Nor an "eat out" habit. The luxury industries - those that sell things we don't actually need - will go bust. Those workers will find actual jobs, now that they are not incentivized to enjoy a Funemployment payout.