I guess this proves the importance of tipping!


Hint: If you go to this restaurant in Paris, France, make sure you leave a good tip.

Seven waiters at a Japanese restaurant in Paris were under arrest today after an armed robber was stabbed to death with a sushi knife after trying to steal their tips.

The 22-year-old was brandishing a pistol when he raided Planet Sushi, in the upmarket 5th arrondissement, last night. 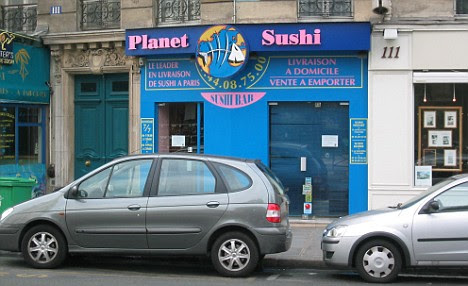 An accomplice, also 22, was with him, holding an electric stun gun.

The pair first demanded that that management in the restaurant handed over all the day’s takings.

When they refused the criminals began helping themselves to a tray full of tips.

This infuriated the waiters, who began fighting with the robbers, stabbing one
with a razor sharp kitchen knife used to ‘sculpt’ fish segments into sushi.

‘An extremely vicious fight broke out, with one robber mortally wounded,’ said
a Paris police spokesman.

‘The robbers had arrived soon after 11pm when the tip tray was pretty full. The thought they could get away with the cash, but the restaurant staff were having none of it.

‘That’s when a knife was used on one of the robbers.

‘We arrived at the scene with ambulance staff but they could do nothing to save the injured man. He was rushed to hospital but died a few hours later.

‘Seven staff at the restaurant have been arrested along with the second alleged robber. A full enquiry is under way.’

Police refused to name any of the suspects involved.

Let me tell you, if those waiters take their tips that seriously, you'd better believe I will, too!

Sadly, unless the waiters are of "youths of undetermined ethnic origin" (Arabic Muslims) they stand a much higher chance of jail time than the actual criminals.

I wonder which of the banlieues the perps were from? Clichy-sous-Bois?

Given what I know of sushi chefs and sushi knives, I'm vaguely surprised that slices of the thieves of exactly the same thickness weren't arranged in an artistic pattern on the counter.

Seriously. Those knives- and those who wield them- are like surgery-grade tools.

Why would the waiters be arrested? They should be given a pat on the back.