(Other articles in this series are listed in the sidebar, or you can click here to display them all in reverse chronological order.)

Readers of my emergency preparation articles will recall that I recommended canned food as a much more cost-effective solution than freeze-dried or other specialty emergency foods.  Sure, it's bulkier and heavier, but you can buy up to six servings of canned food for the price of a single serving of the freeze-dried stuff.  On a limited budget like mine, that's a very important factor!

One problem, though, is how to store your canned food in such a way that you know how much you have, and can use the oldest cans before the newer ones, so that your food supplies don't become out-of-date and risk deterioration.  There are all sorts of solutions out there.


All those ideas are useful if you have money to buy them, or time and the necessary skills to make them.  However, I'm time-limited because of all the work involved in publishing four books this year, and given my physical limitations as the result of a crippling injury in 2004, I'd probably have a hard time investing several hours in cutting, sticking, gluing and tacking cardboard or wood.  I needed something cheap, simple and easy.

One of the cardboard rack articles above mentioned an outfit called Can Organizers.  Their storage boxes looked to be both cost-effective and very practical.  Here's their advertising video.

I ordered one pack each (containing four units) of their three smaller sizes, to test them, and four 4-packs of their largest 'Pantry Organizer' size.  They arrived yesterday, well shrink-wrapped and undamaged after a four-day ground shipment from Utah.

I've so far assembled three of the 'Pantry Organizers' for use with my bulk emergency supplies in our basement.  They hold fewer cans than claimed on the company's Web site;  it states they'll hold up to 16 cans of vegetables, but mine only hold 14.  (I suspect they may want you to ram them in harder, to make a couple of cans pop up over others in the sloping stack, but I'm not going to do that.)  You can load them with the oldest cans first, then newer ones, so that as you take cans out of the bottom opening for routine use, you're automatically using your old stocks first.  They fit easily in the heavy-duty storage units I use - I reckon I'll be able to fit eight of them onto every shelf. 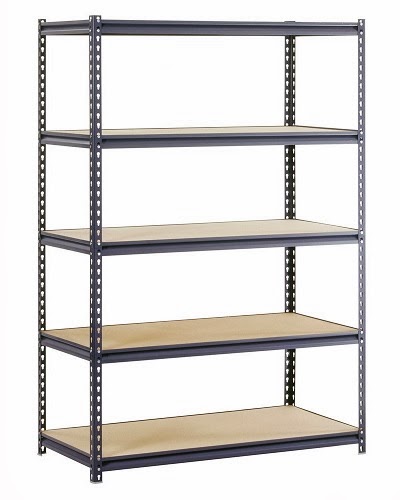 I plan to fill a 'Pantry Organizer' with each variety of canned food we keep in stock, and add a flat or two of extra cans of those items we use most.  As I empty each organizer I'll refill it from the flat, or buy a few more cans during routine weekly shopping runs.  When the flats of frequently-used tins are empty, I'll replace them.  That way I'll never fall below about a dozen cans of each type of food.  I'm going to try the smaller Can Organizer units upstairs in the kitchen, where I'm sure they'll come in handy to hold supplies of the canned goods we use most often (like diced tomatoes, tomato paste, tuna, black beans, etc.).

Overall, I'm very pleased with the Can Organizer range, and I recommend them to help organize your can storage.  It's about as simple and cost-effective a system as I've found short of making your own racks out of scrap cardboard or lumber.  If you want to do that, I've provided links above to plans and instructions.

(In case you were wondering, no, Can Organizer hasn't asked or paid me to endorse their products - I just like them, and intend to order more for my own use.)

I use a variation on this theme available at Walmart for around $7.00 or so. This one from Amazon is chrome. The ones at Walmart are white vinyl dipped.

We got plastic ones at Lowes. It helps if you have the possibility of a wet floor. AND we drink colas by the case and I've been looking at the empty cases and thinking "Hmmmm". So, for free, I already have cardboard cases.

AND, after having to toss some whose expiration date was LAST year, I'm starting to notice something odd at the grocery store: the expiration dates are no longer as far in the future as they used to be.

Those rather resemble industrial stockroom bins.

Cardboard may not be the best choice in humid climates. I've tried a couple of things, and all of them I've looked at are compromises of one kind or another that is (for me) less than ideal. Just having better organized shelves, and moving things manually, seems to work best for me. Buy a new case, move the old case to the front. Working in individual units seems wrong if you are stocking enough to need to rotate.

don't automatically toss things at the expiration date. Mostly, that is the last day they can be legally sold, IIRC. Check the container to see if it is still (vacuum) sealed. If a can, when you open it, check the entire inside and outside for corrosion that may have allowed contamination (cans can sometimes be difficult to tell if still holding negative pressure, especially the big ones). Smell the contents. When in doubt, toss it out.

There is a new grocery store in town, some sort of discount supermarket, that seems like a dollar store on steroids. Have to check every date stamp, I've discovered. They carry overstock/unsold/approaching expiration type food, along with off-brand fresh stuff.

Lots of Asian supermarkets around here, also. Really have to check dates in these places, as I have seen packages more than a year past sell-by dates!

Best way to keep your cans rotated is a low-tech device. Write the date on the top of the can with a Sharpie when you place it on the shelf. I don't mess with a bunch of storage systems, just place the new items behind the older ones - did it for twelve years in the restaurant business, and it works the same way in my home pantry.