Surfing in a combat zone


I was intrigued to come across a photo essay in Foreign Policy magazine titled 'Surfin' DMZ:  Hanging 10 in the shadow of North Korea'.  Here's an excerpt, with one of the photographs as a sample.

Surfing the 38th parallel is not like surfing in Malibu or Lower Trestles in California, or Snapper Rocks on Australia's Gold Coast. 38th Parallel beach -- one of the few available beaches on South Korea's east coast -- is a strip of sand about a third of a mile long, cut off on both sides by barbed wire-topped fences. Getting to the waves means carrying your board past the aging guard towers that dot the coastline. A person taking a nighttime stroll on the shore might find himself at the center of a spotlight, shining down from a sentry tower. It's all a far cry from the laid-back surf towns of California, Costa Rica, or Australia. 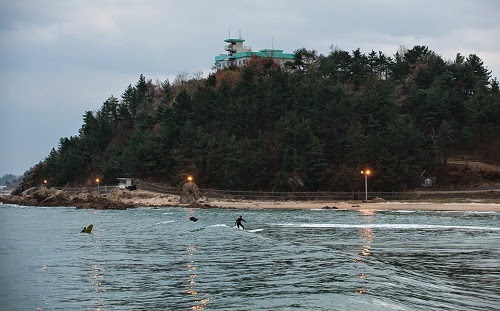 While the east coast of the Korean Peninsula is mainly peaceful -- with far fewer of the skirmishes that flare up from time to time in the waters off the west coast -- the occasional North Korean defector might still turn up on an east coast beach. Troops still patrol the sands daily.

But the surf scene keeps growing, undeterred. These are, after all, among the top waves South Korea has to offer ... They just happen to be found between two strips of barbed wire.


There's more at the link, with many more (and much larger) photographs.  Recommended reading.

38th Parallel Beach sounds like a place the 'Combat Surfers of World War II' would have enjoyed.  Its story reminds me in some ways of an alleged 'golf course' laid out in the operational area in northern South West Africa (now Namibia) during the Border War.  The 'fairways' were scrub-covered semi-desert arid sand (the scrub counted as a local hazard, allowing a free 'drop');  the 'bunkers' were places where vehicles had churned up the wet earth during rainy season (sometimes accidentally, sometimes deliberately in order to create a 'bunker' in just the right place);  and the 'greens' were nothing more than sand that was kept weeded and rolled flat by defaulters being punished (I was one of them, on one unforgettable occasion!).  Despite its oddness, it was well patronized by avid golfers.

'Boys and their toys' indeed!

It's a fake. We all know Charlie don't surf.

It's got a fantastic peak. There's a long right and left slide and the bowl section -- it's just tube city...

"A six foot peak?! Ha! There isn't a good peak in this whole shitty country, it's all goddam beach break!" 😁