Larry's latest book is out!


My friend Larry Correia's latest novel, 'Warbound', the third volume in the Grimnoir Chronicles, has just been published.  The publisher's blurb tells us: 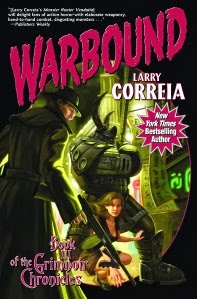 Only a handful of people in the world know that mankind’s magic comes from a living creature, and it is a refugee from another universe. The Power showed up here in the 1850s because it was running from something. Now it is 1933, and the Power’s hiding place has been discovered by a killer.

It is a predator that eats magic and leaves destroyed worlds in its wake. Earth is next.

Former private eye, Jake Sullivan, knows the score. The problem is hardly anyone believes him. The world’s most capable Active, Faye Vierra, could back him up, but she is hiding from the forces that think she is too dangerous to let live. So Jake has put together a ragtag crew of airship pirates and Grimnoir knights, and set out on a suicide mission to stop the predator before it is too late.


I've got the previous two novels in the series, and you can bet this one's on my list too!  Larry's on a book tour promoting it right now, and he'll be near my home next week, signing copies.  I guess I'll have to go buy one while he's here, and get him to scribble in it for me.

Looking forward to Larry coming to Nashville on Monday.

What an excellent novel! I thoroughly enjoyed it and was sad when I was done reading, because MORE.