I didn't know that many of my friends may be terrorists!


Looks like Big Brother is doing his usual stupid thing again.  According to Public Intelligence:

A joint bulletin issued in early August by the Department of Homeland Security and FBI warns state and local law enforcement agencies to look out for people in possession of “large amounts” of weapons and ammunition, describing the discovery of “unusual amounts” of weapons as a potential indicator of criminal or terrorist activity.

Citing the example of Norwegian mass-murderer Anders Behring Breivik, who reportedly “stockpiled approximately 12,000 pounds of precursors, weapons, and armor and hid them underground in remote, wooded locations,” the bulletin instructs law enforcement to look for “large amounts of weapons, ammunition, explosives, accelerants, or explosive precursor chemicals” that “could indicate pre-operational terrorist attack planning or criminal activity.”  Weapons do not have to be “cached” in remote locations to meet the standard for suspicious activity.  According to the bulletin, weapons could be stored in an “individual’s home, storage facility, or vehicle” and may include common firearms such as “rifles, shotguns, pistols” as well as “military grade weapons.”  The illegal possession of large amounts of ammunition is also listed as a potential indicator of “criminal weapons possession related to terrorism.”  While the bulletin never clarifies what constitutes a “large” or “unusual” quantity of weapons or ammunition, it does say that such a quantity would “arouse suspicion in a reasonable person.”

The photograph of a 'weapons cache' accompanying the article shows a mere five long guns (rifles and shotguns) and seven handguns, for a total of twelve firearms.  I could multiply that total a couple of times before running out of the contents of my gun safe, and I don't have a particularly large collection.  Some of my friends could out-do me by an order of magnitude!  Consider, for example, these photographs of private - yes, private - gun collections borrowed from this thread on AR15.com (click over there to see many pages of similar pictures - it's a feast for the eyes of any firearm hobbyist!). 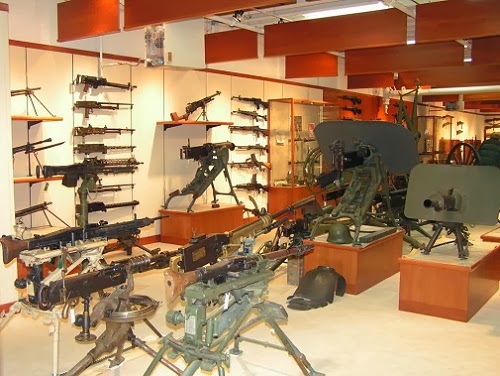 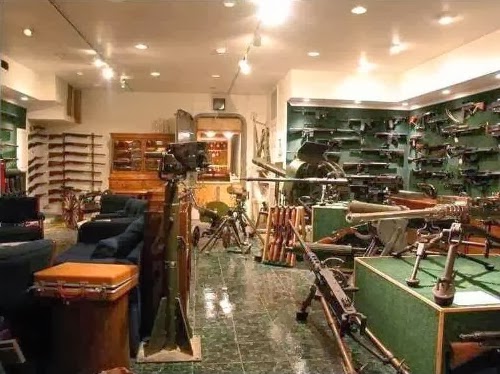 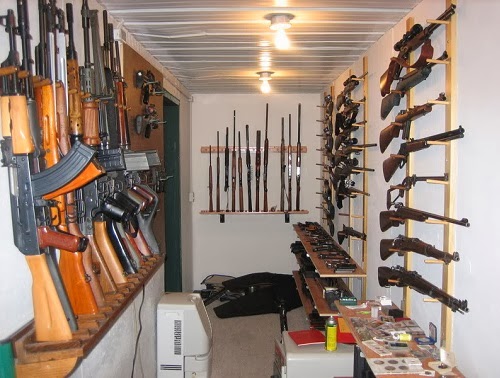 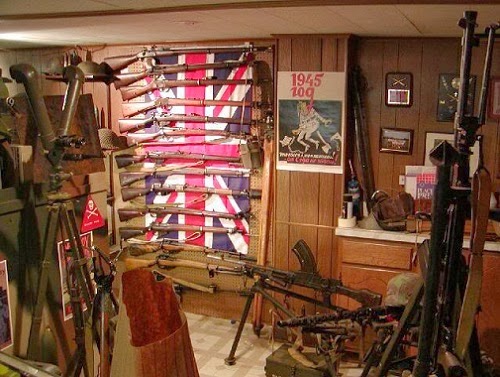 So tell me - are those collections "potential indicator[s] of criminal or terrorist activity"?  If not, then my much smaller and lower-quality collection can hardly be considered to be so . . . unless you're an unthinking, knee-jerk-reacting bureaucrat, I suppose!

As for ammunition - what precisely do they mean by "the illegal possession of large amounts of ammunition"?  It's not illegal to possess ammunition unless you're a convicted felon - and there are no federal restrictions whatsoever on the quantity of ammunition one may have in one's possession.  (There may be local restrictions such as fire regulations, etc., but these will be area-specific.)  To merely say that the quantity would "arouse suspicion in a reasonable person" is ridiculous.  For a start, define 'reasonable'.  What does it mean?  What's a reasonable quantity of ammunition to me, as a rifle shooter, might seem alarmingly large to someone who doesn't shoot at all, or appear ridiculously inadequate to someone who owns one or more machine-guns in the same caliber as my rifle.  He might consume a one-year supply of ammunition for me in only a few minutes of firing!  Witness last April's Knob Creek Machine Gun Shoot:

I know a few private individuals who each currently have more than a million rounds of ammunition in their storerooms.  (Two of them are friends of mine.)  They happen to shoot several hundred thousand rounds per year, so they don't consider such stocks unreasonable - but the average suburban soccer mom who doesn't shoot at all would probably have hysterics if she knew they were stored in her neighborhood.  (I don't know why, because it's no threat to her;  but logic usually doesn't enter into the calculation for such people.)

I try to buy ammunition in case lots - 500 or 1,000 rounds at a time.  That quantity will last me for anything from a few months to a few years in the calibers I shoot.  I buy it in bulk because it's cheaper that way.  I'm a retired pastor and retired law enforcement officer.  Does my buying ammunition in bulk, and possessing a few thousand rounds of it, suddenly render me suspicious to the authorities?  If so, I have a few words for them . . . none of them polite!

This is yet another bureaucratic overreach.  Perfectly normal activities are now classified as potentially suspicious - and don't let that word 'potentially' fool you.  In practice, it means that some law enforcement officers and/or agencies will claim that your possession of large quantities of firearms and/or ammunition is automatically grounds for suspicion, and that you're therefore automatically to be regarded as a potential terrorist, or criminal, or whatever.  Don't tell me that doesn't happen.  It does.  I've seen it far too many times before - and the more bureaucratic and unthinking the officer or agency, the more likely it is to happen.  Constitutional safeguards are all too often ignored in the process.

It's long gone time we tossed out of office the politicians who approved the 'security state', and dismantled the 'security bureaucracies' that do nothing whatsoever to keep us safe - except consume our tax dollars in ever-increasing amounts, and put out such inane 'alerts'.

Our enemies (the current tyrannical government) is just using their propaganda as "battlespace preparation." They have to paint us Patriots as bad guys, hoping the gullible public will believe what they say.

You would think the socialists in charge would have learned from history, but they haven't. They think they can disarm us Americans like other despots have disarmed their populations, but it won't happpen here--not on my watch, at least!

Part of me is really tempted to go out and buy bricks of ammo for firearms I don't have (yet), and if challenged, to say that I wrap them in pretty paper and use them as paperweights and door stops. All the while smiling sweetly, as if to say, "well bless your heart."

Is it time for a complete reboot of this country? A fresh install of the operating system?

Yeah, we're ALL in trouble... And if I remember correctly, the top 2 pics from from the owner of Knight Armament's personal collection. And those are JUST the class III weapons!

After the clueless politicians, who could, maybe, perhaps, be voted out of office, come the agenda driven pencil pushers who seem to have a lifetime of job protection. NEITHER group seems interested in what their employers, the citizenry, want. I don't see an end to a government acting totally of its own will irrespective of the population. I could be wrong, but I don't think so.

Well, I'm not in trouble, yet. With just a single handgun, and probably not even 100 rounds left after the last trip, I'm probably a poster child for what DHS would consider "normal."

Of course, if my financial situation were to suddenly, markedly improve, I would very quickly correct my shortfall.

The faceless bureaucracy is the reason it is time for us to start making lists. These people all know where we live, we should be equally well informed. We need to know who they are, where they work, what they do, how much money they make, etc. Knowing that we know who THEY are and where they live would certainly be an incentive to improve their performance.

(Or cause a run on gated, fortified housing)
Tyranny thrives on anonymity.

Sigh, just a winning lotto ticket away from being a "terrorist".

They refer to it as "the illegal possession of large amounts of ammunition" to influence the sheople's opinion against you/us. Truth matters not. Truth is what they say it is.