In his latest 'Things That Make You Go Hmmm' newsletter, Grant Williams offers a penetrating analysis of what's motivating the Federal Reserve right now, and the dilemma it faces. Here's an excerpt.

The Fed has painted itself into an almighty corner with QE, and it looks as though we are finally getting to the point in the process where that fact begins to (a) occur to people and (b) matter.

Bill Fleckenstein has often spoken about the Fed's reaching the point where it "loses control of the bond market", and it is quite possible that we are rapidly approaching that point (the signs have certainly been strong in Japan). We may be there already. We won't know until we can look in the rearview mirror, I'm afraid; but the nonvirtuous circle the Fed has created is extremely clear: 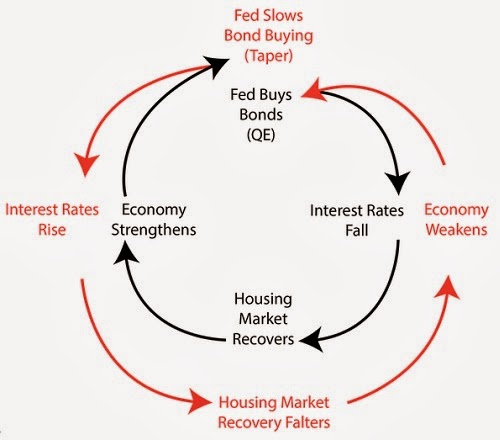 The simple truth, as you can see from the diagram above, is that the economy and the markets are now 100% dependent on the largesse of the Federal Reserve to sustain them.

What you CAN'T see from the diagram is the scary proposition that the Federal Reserve in turn is entirely dependent upon hope to get itself out of this unholy cycle.

The Fed is hoping (as are the ECB, BoE, and BoJ) that the economy recovers sufficiently through massive stimulus so that the recovery will be "self-sustaining"; but, as can clearly be seen by the action of the markets in recent weeks and months, that strategy (such as it is) appears doomed to failure.

Eventually, this pile of dollars is going to be the thing that sinks Bernanke... or Yellen... or whoever has the helm on the fateful day when reality reasserts itself. That may not be tomorrow or next week; but, based on recent events, that day is a lot nearer to hand than most people thought just a few short months ago.

The Fed realizes the truth of that — hence the abandonment of both the Taper and their own credibility — but their chances of averting catastrophe are receding daily.


There's much more at the link. Highly recommended reading, albeit disturbing.