The day in Africa when the Cold War almost turned hot


As most readers will know, I was born and raised in South Africa, and served in that country's armed forces as a young man.  While researching some of the transport aircraft of the former Soviet Union, I was reminded of an incident in 1975 or 1976 (I forget precisely which year) that almost caused a couple of US representatives to have kittens on the spot.

The Soviet Union built the giant Antonov An-22 transport (shown below - still the largest turboprop-driven aircraft ever constructed) for its strategic airlift forces (as opposed to tactical airlift, which used smaller aircraft such as the Antonov An-12 and An-26).  The An-22's normal payload was up to 60 tons, but it routinely carried up to a third more than that on shorter flights, and actually lifted a full 100 tons to an altitude of over 25,000 feet during one record attempt.  It was a remarkable achievement for 1960's aviation technology.  A few of these giants remain in Russian service to this day (although most have been replaced by the even bigger Antonov An-124 jet transport). 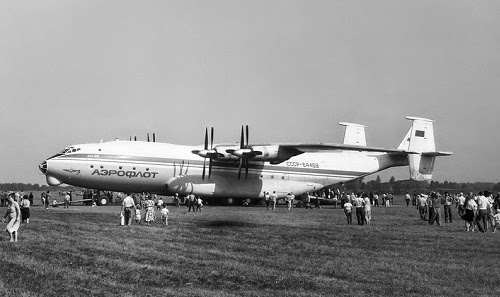 Being a long-range heavy-lift strategic transport, the An-22 was used by the Soviet Union to ferry armaments and other urgently-needed military supplies to Angola during the civil war that led to the Communist takeover of that nation in 1975 and 1976.  Several of these aircraft flew shuttle missions between the Soviet Union and Angola, and others flew between Cuba and Angola, bringing in Cuban surrogate forces and their arms and equipment.  For some weeks there were three to six An-22 flights coming into Luanda, capital of Angola, every night, offloading their cargoes for onward shipment by ground transportation then returning to collect more freight.  Their cavernous cargo compartment (shown below) could hold more than any other airlifter of the period except the Lockheed C-5A. 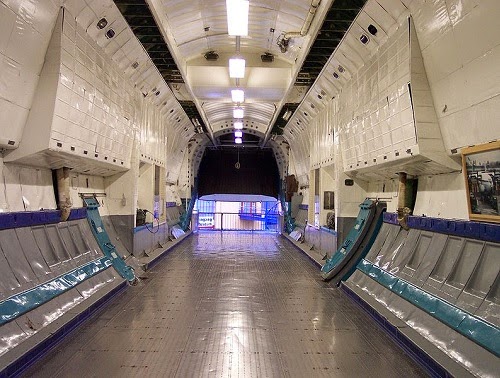 South Africa got involved in the Angolan conflict in an attempt to prevent a Communist takeover there, initially with the encouragement and covert support of the US Ford administration.  Unfortunately the Clark Amendment terminated such support, leading to South Africa being forced to withdraw from Angola (and precipitating the ongoing conflict in that country that was only resolved in 1989).  South African forces ranged from the border with what is today Namibia all the way up to just outside Luanda (a distance of about eight hundred miles), operating with relative impunity at first, but later facing growing Cuban-led opposition.

A South African reconnaissance unit duly arrived within sight of the airport at Luanda, took a look at the increasingly hectic pace of resupply flights involving the giant An-22's, and radioed a proposal to its base in Namibia.  It was in possession of a number of captured shoulder-launched ground-to-air missiles, and was close enough to the runway to be sure of being able to hit the big planes as they came in to land.  The South Africans proposed to shoot down all the incoming flights the following evening, which under normal circumstances would involve three to six An-22's.  They requested permission to proceed.

Their bosses duly put the question to a couple of US representatives who were providing 'advice' as to what was, or was not, politically acceptable from the point of view of the US administration.  The representatives promptly had kittens.  An account from someone who was present at the discussion claimed that they begged and pleaded for the South Africans to abandon any and all plans for such an attack.  They believed that the loss of so many of their limited supply of strategic airlifters (which were used to, among other things, ferry intercontinental ballistic missiles around the Soviet Union) would enrage the Soviets, and lead them to attempt something big in the way of retaliation.  This, in turn, might involve the USA willy-nilly in the escalation of the conflict in Angola into something no-one wanted in the wake of the all-too-recent loss of South Vietnam to the Communists.

Reluctantly, it's said, the South African leadership conceded, and radioed their forces outside Luanda not to proceed with the attack.  The latter were reportedly livid at having to forgo such a splendid opportunity, and protested vigorously, but were forced to knuckle under.  The US representatives breathed a sigh (probably several sighs) of relief.

Here's a video clip of the An-22 at a Russian air show in 2008.  For all its immense size and weight, it's still a pretty handy performer in the hands of a good crew.  I recommend watching it in full-screen mode.

I wonder if that's one of the planes that was almost shot down in Angola, all those years ago?

Would've thought if the Reds were as dangerous as the western rhetoric of the time said they were - and they definitely were, at least to their own people - then people would've wanted to smash them instead of letting eastern europe fester under their rule.

Have to wonder who profited from having an enormous foreign enemy looming over the horizon.

Does beg the strategic implications. As to the tactical, it would be shooting fish in a barrel. On reason I am reluctant to fly these days is the possibility of some irate muslim setting at the end of the runway. Put a van in some woods, shoot and scoot. Would be very effective.

Sometimes it is easier to ask for forgiveness than beg for permission.

Politics gets in the way of the boots on the ground WAY too often... I'd probably have shot and asked for forgiveness later... :-)

More evidence -- as if any were needed -- why REMF was coined for good reason.

In reference to Bill's observation, let me add that it takes institutions to build up confidence in its officers which may (by design) result in battlefield resolve to exploit opportunities without asking for permission.

I once observed (though I doubt I was the first) that there has long been a Gresham’s Law at play in Western Institutions.
http://pascalfervor.blogspot.com/2013/07/greshams-law-applied-to-american.html

In its simplest form, “Bad actors drive out good.”

You name the once prestigious and honorable institution staffed by man, and you don’t need to be a cynic to see how far it has wandered or been torn away from its stated goal.

And there, my friends, is the shortest answer explaining why the West finds herself where she is today.

I have to ask... Do they really thing they would have gotten more than 1 of the big bastids? Presumably they weren't more than a recon unit and presumably the Angolans had SOME defensive capability at the airfield to drive a recon force out of range once they shot down the first of the evening. And surely they have radio capability to warn off those coming in later.

Should've shot down one and skedaddled. "Why, it must've been some dissident rebel group. T'wernt us."

Angola is certainly a different place today. It's the only Third World country that's receiving a steady flow of First World immigrants, a reversal of the usual pattern. Tens of thousands of people are leaving Portugal, where unemployment is very high, and going to work in Angola's burgeoning oil industry. Many of them are saying that they want to remain permanently.