Noel Coward famously said that "Mad dogs and Englishmen go out in the midday sun".  However, it seems that the deep midwinter snow in far northern climes attracted at least one Englishman - and on two wheels, at that.

Tim Moore began a 10,000-mile journey along the Iron Curtain in Finland, riding a Cold War-era MIFA 900 East German urban shopping bicycle (which broke in two on more than one occasion).  He's written a book about his experiences, titled 'The Cyclist Who Went Out in the Cold'. 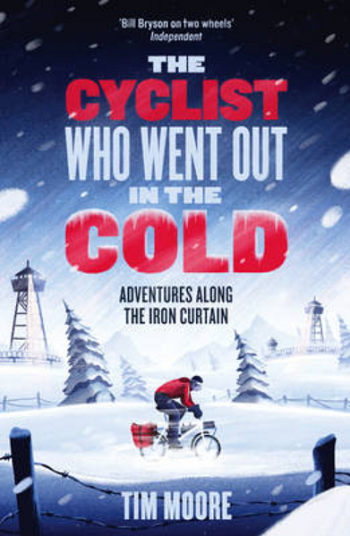 When the writer Tim Moore heard of  a new bike trail tracking the old  Iron Curtain, he found himself recklessly inspired. To a child of the Cold War  who had spent his boyhood twiddling  through eerie Soviet signals on  a short-wave radio, the freedom to roam this continent-cleaving frontier still seemed extraordinary.

Having retraced the 1914 Giro d’Italia on a 99-year-old bike with wooden wheels for his last book, and taken on the Tour de France for another, all that remained was to select an authentic steed for the challenge. And quite soon, for €56 via German eBay, he found it: a vintage East German shopping bike.

Superficially a match for capitalist urban bicycles, the MIFA 900 lacked gears, featured a terrible ‘spoon brake’ that had elsewhere died out with the penny-farthing, and was so poorly engineered that it routinely broke in half.

Moore  had barely turned a pedal in a year, and was about to turn 51. The planned trip was 10,000km – three times further  than he had ever ridden in one go. And for the sake of consistency, he set off during the Arctic winter...

To the cyclist, snow is like sand. If you’ve ever ridden a bike on  the beach, you will have an idea of  the consequent impact on speed and ease of progress.

Every kilometre was an attrition of gasps and slithers, one more battle in this hopeless campaign to conquer a hostile infinity.  I gazed through a fleece-framed slit across iced lakes and forests, my snood-muffled huffing the only sound in a cryogenic realm of white silence.

I saw my first reindeer, a mournful taupe column shuffling through the snow with antlers downcast, on their lonely trek to a farmer’s casserole. Once every hour or so a car barrelled waywardly past, piloted by a blank-faced man in a docker’s hat with a fag between his lips.

To preserve my bond with humanity I duly saluted each and every one, though with my many-gloved hands wedged fast in my pogies (as I’m afraid those oven-mitt handlebar covers are known), all I could manage by way of  greeting was a wink. Until we hit minus-13,  and my eyelashes started freezing together.

It was way past six now, and the sun’s long goodbye was gilding the alabaster wilderness  in a manner that would have doubtless looked wonderful through a heated windscreen. I lowered my gaze to the Garmin GPS screen, and watched the temperature flash down to -14.2C.

Somewhere inside their six-layer cocoon of rubber, merino wool and polythene, my toes died, a farewell klaxon-scream of agony fading into wooden numbness.

Far more terrible, though, was the message that soon emerged from within my pogies: the thrice-gloved fingers that had been clawed rigid round the bars all afternoon now felt fluidly, lazily aglow, drawling for release from their four-walled thermal prison.

Here they came, the opiate delusions of hypothermia, luring me off to a peaceful, stupid death.  Withdrawal, confusion, sleepiness, irrationality… My mind riffled desperately through  the stages of hypothermic consciousness that preceded ‘apparent death’ in an online chart I’d found, hoping to recall which one bore the dreaded footnote: ‘By this stage you may already be too far gone to recognise the problem.’

It didn’t help that sleepy, irrational confusion had been my default state for 48 hours. How much further? I looked at the Garmin and met a blank screen – the battery had gone.

Hysteria welled in my guts. Did I have 5k left? Ten? The celestial dimmer switch was on the twist from dusk  to dark, and I hadn’t seen a car for at least two hours.

When the road now curved uphill I succumbed to full-blown panic, pedalling so hard that my studded rear wheel began to fishtail wildly through the snow and its underlay of polished ice.

Sweat sluiced down me, defrosting my eyelashes and stinging the mad red orbs behind them. Calm the f— down! With a supreme effort I steadied my breathing and slithered to a halt, and there, winking through the trees and the frosted gloaming, was a cluster of lights.

So unfolded the longest, hardest days of my entire life. The mornings began with a bleary, fearful peek through many layers of bedroom glass, scanning the sullen sky, the thermometer nailed to the window frame outside, and beneath it the wobbly, last-gasp slalom my wheels had traced through the snow the night before.

Twelve hours later I would stumble into a hotel reception, or a log cabin, or a reindeer farm, and stand there, shuddering and melting, while my refrigerated, undernourished brain struggled to process thoughts into speech.


There's much more at the link.  Entertaining and informative reading - with plenty of misadventures thrown in.  (I learned a lot about saunas.)

The book certainly sounds like an entertaining read, although the journey is not one I'd care to retrace myself!  I'll be adding it to my 'To Read' list.