"The last hot battle of the Cold War"


That's how one author referred to the 1987-88 battles between Cuban and South African forces (with support from, respectively, Angolan and UNITA troops).  I was there, and remember it well.

Fred Bridgland wrote a book shortly after the fighting, titled 'The War for Africa:  Twelve Months that Transformed a Continent'. 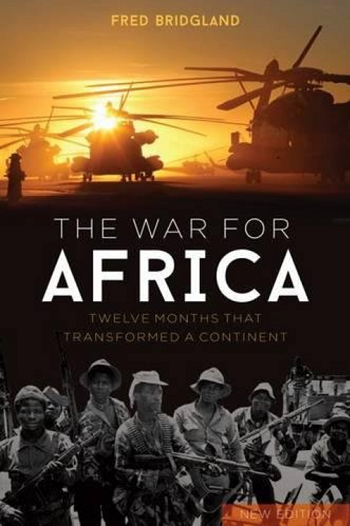 I bought it as soon as it was published, and enjoyed it very much.  He was accurate in his facts, incisive in his analysis, and brought together many threads (some of which, as in most wars, many of us 'on the ground' had been unaware) to produce a cohesive account of the fighting and its geopolitical and geostrategic implications.

I'm delighted that the book has now been republished in a new edition, with an updated introduction and the inclusion of some more threads of events that didn't make it into the first edition.  (Mr. Bridgland still doesn't know about some of the things that went on, in some of which I was involved - but since we were all sworn to secrecy, those stories may never be told.)  It's as good as I remember it to be, and it brought back many memories (some of which I'd rather not have, thank you very much) as I paged through it.

I recommend this book very highly to those interested in military history, in the Cold War, and in one of the lesser-known combat zones of that not-very-frigid-at-all conflict.  This was the climax of my war.  It shaped and formed the rest of my life.

I remember watching the East German news showing film of Cubans fighting in Africa, and describing them as American imperialist warmongers.

You survived some really nasty times, Peter. Congratulations on making it out alive, and then coming over here.

I knew some others who thought the final war of the Cold War was fought elsewhere in the last dying days of the USSR. I stopped reading of south African histroy shortly after reading some fictional accounts of the war there. As with Exodus, by Uris, one read was enough to establish the situation and end the desire to learn more. The primary sources now are equally divided and thus, suspect. Go with what you know is oft a lesson to be the first on the ground with a history.

I read Battle Cry when it first was published while still mired in the last war of the USSR era. It kept me awake.

Thank you for the reminder, Peter. I just picked up my copy.


I attended a presentation on the battle of Cuito Canavale a few years ago by an SADF guy who was there. It was _really_ interesting.