Not your average Big Mac - at least, not in the USA


I was reminded that McDonalds has various regional favorites around the world that can't be bought in the USA. 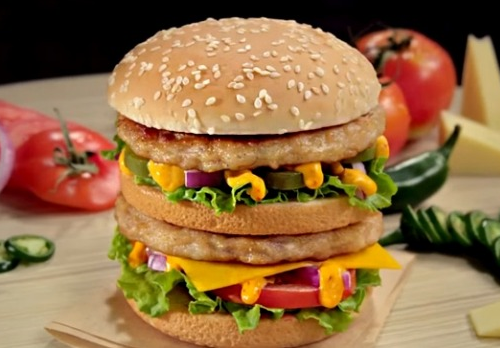 With India being a predominantly Hindu country, and cows being sacred in Hinduism, beef is not a commercially viable (and in many states, legal) option for a Big Mac. When McDonald's first opened up in India, the beef was replaced with lamb. But now the magic formula has been struck, and the patties are made of chicken. Gone too, however, are the pickles. In India's version, there are jalapenos, and the usual mustardy-mayonnaise "secret" sauce is replaced with a fierier habanero alternative. The bifana is Portugal's national sandwich, and it's little more than pork in bread. Traditionally, this is stewed pork, but a lot of places use grilled pork instead. And McDonald's has joined the latter with its McBifana. In doing so, it has kept things very simple. It's two pork patties, shunted inside a hard, semi-crusty roll, and with a slightly sour sauce.

There are more examples at the link.

I wonder if McDonalds could be persuaded to bring some of those to its US customers?  I'd like to try them.

Sorta kinda on topic: When I lived in suburban Chicago in an area with a large Indian population, it was common to see Indian families eating at Taco Bell. Many Indians don't eat meat at all, and Taco Bell (at least there) would make any of their "entrees" without meat.

I'd love to try the Chicken Maharaja Mac!

The Maharaja and the Kofteburger both look pretty good to me.

Look at UK's Mcdonald's menu. Lots of different stuff. If you want to get into detail, you will notice that the list of ingredients on most of their products is significantly different than those in America. Compare our fries to the UK fries for example. On almost every item, American McDonalds add a lot of chemicals to the food. I have a McDonald's breakfast about 4 times a year, otherwise I never eat there.

And the Japanese have a shrimp burger at McDonalds... sigh

There is an establishment called World of Coke with two locations that I'm aware of in Atlanta and Las Vegas.
Small charge to visit, lots of information, and at the one in Vegas they had a long series of spigots with Coke flavors popular in countries other than America. Some were interesting and others just plain nasty to my simple midwestern US palate.

Had a "Samurai Burger" (QuarterPounder with teriyaki sauce) in Singapore once. It was okay but hardly memorable. While the tone-deafness of a sandwich reminiscent of Japan's "the rest of you are subhuman" warrior culture in a land that was ravaged by the Japanese is notable, what really stands out was the counter-guy who took my order. It was apparently training day, and this Baby Huey of a Cantonese kid (I'm guessing 16 years old, well over 6 foot, and at least 300 lbs) greeted me with a rictus of a grin on his big moon-face "And how may I be of assistance to you today, sir?" while his trainer looked on benignly. I heard a snort behind me, and it was the then-girlfriend trying desperately to not laugh out loud. "He has a head like a pumpkin!" she said into my ear. It was true, the kid had a big ol' pumpkin head. Considering the size of the average Singaporean, they probably had to special order a uniform for the kid.

Oh, regarding local dietary restrictions. The only time I was in Malaysia, I noted that McDonalds didn't sell hamburgers. Rather "100% beefburgers" -- for obvious reasons.

here in New Zealand, they have a Kiwiburger that contains beetroot.

There are two foods which appear in virtually every NZ recipe – cheese and beetroot. Kiwis don’t get the Monty Python Spam sketch but if you remade it with cheese instead of spam, then it would be considered a classic.

I do not know if beetroot is considered a relish, vegetable or a condiment.

Beetroot is sold in tin cans, not jars. Presumably instead of using it as a once in a while treat, once the can is opened, it is eaten in one sitting. Frequently. I do not know why.

If you want to buy a hamburger, you must specify that you do NOT want beetroot included. Be prepared to be treated like an unsophisticated village idiot on his first visit to the big city by the staff for this utter lack of appreciation for the finer points of beetroot. This will improve your debating skills as they try to persuade you of the errors of your ways.

MacDonalds had to introduce a Kiwiburger to allow beetroot to be included in their range – this probably more than anything shows the power of beetroot on the Kiwis eating habits. Produce a burger without beetroot and you fail miserably.

So that's another one to add to your taste sensations ... or not as the case may be!