I'm sure all Americans in their right (not right-wing, but logical, balanced, fair, reasonable) minds will be as horrified as I was at the deliberate targeting of Republican congressional representatives at a baseball practice by a deranged shooter yesterday.  However, the reactions to that tragedy speak volumes.  Two days ago, before the shooting, I asked whether America was a house divided, and if so, whether it could stand.  I suspect this tragedy has gone a long way towards answering my question.

Many far-left-wing and progressive commenters actually rejoiced in it.  (Click the image below for a larger view.) 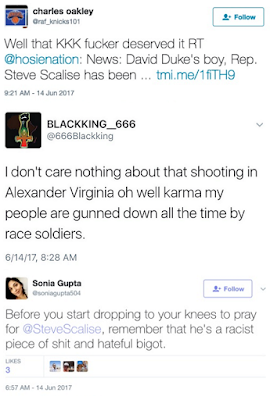 There's more at the link.  And, yes, I'm aware that when tragedy strikes a left-wing personality, there are many equally deranged, bitter and twisted people on the right who'll delight in it (as happened, for example, after the shooting of Gabrielle Giffords in 2011).  I'm not trying to demonize only one side here:  merely showing that basic humanity and common decency are conspicuous by their absence in far too many of those who have become politically radicalized, no matter what side of the political aisle they may choose.

Most commenters refused to acknowledge (or perhaps didn't even think about) the human tragedy involved.  Multiple families are traumatized right now, their loved ones fighting for their lives.  Even the family of the perpetrator (if he had any surviving family - I don't know) must be agonizing over why he chose to do what he did.  However, almost no commenters had a word to say about that aspect.  They turned the tragedy into an argument about pet hobby-horses like gun control, or used it as an opportunity to condemn their political opponents.  Humanity was conspicuous by its absence.

Folks, I've been shot.  I've shot other people.  I've been present at far too many incidents where others were shot.  There's always a human dimension (as there was, for example, in the wartime death of two young Cuban soldiers, about which I wrote here).  If you can't see it, or don't care about it, then you've become less than human yourself.  You don't have to don sackcloth and ashes and make a big, public, wailing exhibition of yourself:  but for heaven's sake, recognize the truth that a tragedy like this is a human tragedy, irrespective of political, social, economic, cultural or any other affiliation.  As such, it should - it does - affect all human beings.  John Donne was right.

No man is an island,
Entire of itself.
Each is a piece of the continent,
A part of the main.
If a clod be washed away by the sea,
Europe is the less.
As well as if a promontory were.
As well as if a manor of thine own
Or of thine friend's were.
Each man's death diminishes me,
For I am involved in mankind.
Therefore, send not to know
For whom the bell tolls,
It tolls for thee.


In losing that realization, that perspective, we are all impoverished . . . and we are all endangered, because if humanity becomes dehumanized, what is left to us?  And, if America is so polarized, so divided, that all we can do is rejoice over death or injury to those on the 'other side' . . . what is left to our nation and our society except mutual hatred, contempt and destruction?

May Almighty God have mercy on us all.

Well said. These are people for crying out loud.

An admirable view that stands out from other opinions. Thank you sir.

This conclusion And, if America is so polarized, so divided, that all we can do is rejoice over death or injury to those on the 'other side' . . . what is left to our nation and our society except mutual hatred, contempt and destruction? is what fills me with dread.

In retrospect, our cold civil war has been flaring into hot spots off and on for a while now. Now I see the potential for it to flare up until it burns out.

May Almighty God have mercy on us all.

I have been a part of the American gun culture for over 50 years, lived through the increasingly restrictive legislative efforts to disarm honest citizens while giving criminals a free pass.
The left love gun control because they see it as a means to incapacitate the power of conservative citizens. They always assume that confiscatory gun laws won't apply to them, they being people of privilege after all. They will either get a special dispensation, or be able to hire "authorized" armed guards for themselves.
And as ever was, the blood of the innocent victims still wet on the ground the left dance in the gore blaming the instrument while denying the very real fact, especially in this case, that the perpetrator was one of their own, emboldened and driven to his outrage by the rhetoric and encouragement spewed forth by them and their media partners.

Do not rejoice when your enemy falls,
And do not let your heart be glad when he stumbles; Lest the Lord see it, and it displease Him,
And He turn away His wrath from him.

While there may have been some who rejoiced in the Gabby Giffords shooting, I expect that the number (or percentage) of right leaning folks was significantly less than that of the left who are rejoicing today. like 1% of the leftist number.

Were anyone I knew to rejoice, I would disassociate myself from them immediately, and most of the people I know would do the same.

Not so, leftists. They fail to see others with opposing views as people. Leftists tend to be mean spirited, childish folk. Which is, really, a part of why we, as a country, are divided.

Well said, Mr. Grant. Unfortunately, there are far too many who take the view "I can be nasty because they did it first" or "we aren't as bad as they are," leaving a significant portion of political discourse resembling a playground full of children.

The rule of law protects these little SJWs from me.

They despise the rule of law at their peril.