A military blast from the photographic past


Here's a fascinating little gizmo.  Click the image for a larger view. 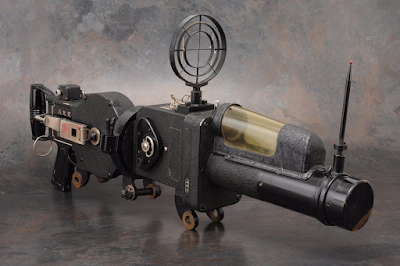 It's a training camera used for machine gun operators during World War II.  It's for sale on eBay in the UK.  The blurb reads:

The camera is in overall excellent condition, especially considering it was used during war-time.

... these cameras would be mounted in airplanes instead of the real thing as a way to train new gunners. When the trigger is pressed, the camera would begin snapping 18x24mm pictures on 35mm cine film loaded in 2.5m strips. The photos captured whatever the "gun" was aimed at, while an optical stopwatch (placed in the yellow tube up top) was recorded onto the photos using a prism. These images would be examined later to help improve the gunner's accuracy.

The auction is scheduled to end on February 26th.  Asking price is a mere $4,499.99, so if you're flush with cash and you're a photography buff and you're a military history buff, this might be for you.  Personally, I'll pass.