How technology is changing battlefield surveillance


A very interesting development shows up in the Trump administration's budget request for fiscal 2019.  The USAF will replace one of its premier intelligence-gathering platforms - but not with what was expected.

The decision ... would terminate the Northrop Grumman E-8C JSTARS and cancel a three-way competition to replace the platform with a large business jet or a Boeing 737.

The funding for the JSTARS recapitalization programme will be diverted to pay for development of an advanced battle management system, but details remain scant.

As the E-8C enters retirement in the mid-2020s, the Air Force plans to have the first increment of the advanced battle management system operational, but offered few details.

“We’ll be taking sensors that exist today and maybe putting them on additional aircraft like maybe the MQ-9, and fusing the different sensors from all the areas that exist today,” says Maj Gen John Pletcher, the Air Force’s deputy assistant secretary for Budget.

By switching from a platform to a network of systems for the JSTARS missions, the Air Force’s proposed strategy echoes a decision by the US Navy three years ago. Faced with a replacement bill for the Lockheed EP-3E ARIES electronic surveillance fleet, the Navy decided to break up the mission into a network of existing aircraft and sensors, including the Northrop MQ-4C Triton, Northrop MQ-8C Fire Scout, and Boeing P-8A Poseidon.

This is very interesting indeed, from both a technological and a tactical perspective.

Technologically, it means that the use of a single massive sensor such as the E-8C's AN/APY-7 radar, shown below (ringed in red), is no longer considered optimal. 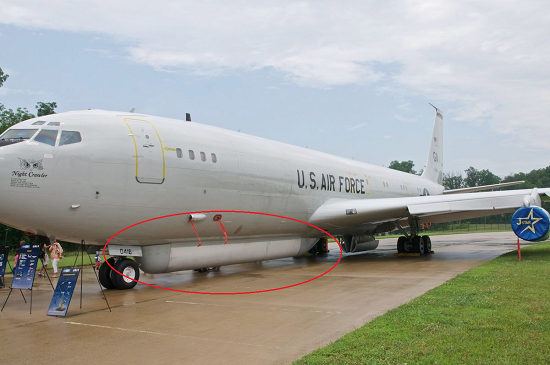 The AN/APY-7 was developed in the 1980's, and despite upgrades to its technology, is nevertheless a few generations old compared to more modern sensors (particularly modern AESA radars, such as those carried by the F-22 and F-35).  Performance similar to (or better than) that of the AN/APY-7 can now be obtained using smaller antennae, perhaps many times smaller.  Certainly, the MP-RTIP program (which we visited in these pages some years ago) was very successful as a test-bed.  A similar sensor was fitted to the Northrop Grumman RQ-4 Global Hawk in its Block 40 prototype, pictured at the previous link;  but I understand its performance has already been overtaken by later developments.  (Note how much smaller the RQ-4's MP-RTIP sensor appears, compared to the AN/APY-7 above.  It looks to be less than half the size - and that's 2000's technology, which has already been superseded.)  The limitations of the AN/APY-7, and the advantages of the MP-RTIP, are discussed in this article, if you're interested.

It now appears that distributed technology, using many sensors on multiple platforms, has advanced to the point that a single, massive, very powerful sensor is no longer the best approach - hence the decision not to replace JSTARS with a new, dedicated platform.  This is not only very interesting from a technology perspective, but also opens up new tactical possibilities and problems.  For example, if the F-35's radar and other sensors are as capable as has been claimed, then every F-35 in or near the theater of operations can send data to every other F-35 (and to other aircraft equipped with the necessary secure link).  The data might be gathered at a central intelligence node, analyzed, and re-broadcast to all who need it;  or it might be processed locally by each recipient, with artificial intelligence systems designating threats and targets within range and suggesting solutions to the problems they raise.

This potential isn't limited to the F-35, either.  Based on comments quoted in the article, it may be possible to put high-grade sensors onto relatively small, low-cost UAV's such as the MQ-9 Reaper.  These are far cheaper to buy and operate than most piloted aircraft.  They could be deployed to lower-intensity conflicts such as Afghanistan, where anti-aircraft threats are minimal, to provide very high-technology sensors and guidance to combatants there.  Even in high-threat environments, such low-cost platforms may be useful, particularly if their size and cost can be further reduced (as is already happening).  If it costs one side more to destroy such platforms than it does for the other side to deploy them, and if destroyed platforms and sensors can be replaced cheaply and rapidly, that will change the cost-effectiveness analysis for both parties.

The latter case would also eliminate one of the major vulnerabilities of late 20th-century operations.  Air forces came to depend on centralized control provided by flying operations centers - the E-3 Sentry (AWACS) to detect enemy aircraft and vector defenders to intercept them, and the E-8 JSTARS to do the same for ground combat.  These aircraft would usually hang back from the battlefield, relying on their sensors to detect the enemy without having to come into range of defensive systems that might threaten them.  However, the former Soviet Union, and later Russia, concentrated on developing ultra-long-range ground-to-air missile systems that could take out E-3 and/or E-8 aircraft, and other vulnerable aircraft such as airborne tankers, without having to put their aircraft at risk against protecting fighters.  The S-300 and S-400 missile systems in particular offer missiles with ranges measured in hundreds of miles.  Furthermore, ultra-long-range air-to-air missiles such as the R-37 and the Novator KS-172 have been designed to target AWACS, JSTARS and aerial refueling tankers from so far away that defending fighters can't intercept the launch platforms.  Such defenses are all very well when there are centralized platforms to target;  but when there are few or none of them - when every aircraft or unit in theater can potentially provide intelligence to every other - such defenses lose a great deal of their effect.

This "sea change" in both technology and tactics may have a profound impact on the way future high-technology wars are fought.  It won't affect things like "grunts on the ground" in Afghanistan, but it will certainly make a war between first-world powers a much more difficult situation for all involved.  In response, of course, there'll be renewed efforts to disrupt the communication between sensors and platforms, certainly involving the jamming of radio communications, and possibly destroying the satellites that make it possible.  That would set warfare back into the relative "stone age" of the Second World War . . . and I'm not sure how many nations could cope with that, given that their weapons systems are all set up to use modern technology.

We certainly live in interesting times.

3 EMP detonations at the right altitude would wipe out all eletronics on earth, except the most hardened and then we will be in the stone age.

So the military is beginning to commit to distributed data collection and management. Took long enough.

Welcome to the party, fellas. Pretty soon you'll discover the value of autonomous tools and processes for that as well. How well that will work with a fleet of 39 ships and 120 airplanes, I dunno, but those are budget, training and personnel issues; maybe you can study that next.

The issue always has been, and always will be MIL for weapons release... That will never be fully automated by a US administration... Sigh...

Sadly, the goal of the network of distributed sensor systems will soon be overwhelmed by the 'need' to spend 99% of the funds on writing the code that fuses all that sensor data. That's been the pattern over the last 30 years. There will only be a handful of old obsolete sensors and any attempt to add new technology to the sensor end will be overwhelmed by a tidal wave of negativity from the program office who is going to respond that they cannot keep programming additional sensor data packets.

Well, nice, but... what happens when communication fails? By environment or by enemy action?

Also... I've been wondering. Can you get the *precise* location of a sensor and then do the same trick they use with radio telescopes when using smaller, distant antennas?

Moore's Law has consequences, one of them being that you don't need a giant array and the brute force computing of '80s tech to get the necessary data anymore.

Also, the first side to try a massive EMP strike to gain a tactical advantage will be on the receiving end of about 2000MT of first-strike response. That's not a genie whose bottle you want to pull the cork from.

technology has made radio sensors more sensitive so to get the same capability you can use smaller antennas.

Even if you can have every aircraft pooling the results of their radar sweeps, you really don't want them broadcasting, as that makes it much easier to detect them.

I'm not saying that one way is clearly right, I am saying that neither is obviously wrong

Anyone who tries to blind and hamstring the whole force using high-altitude nukes has already crossed the nuclear threshold, necessitating a commensurate reply, and is sucking around to get the mother of all wallopings.

If that attack also renders much of the civilian infrastructure to toast, that would only give an even bigger reason to turn the offending party's total real estate into hot glass in less time than it takes Dominoes to deliver a pizza.

And will get just exactly that.

An EMP kill of the US power grid is conservatively estimated to cause 50-200M casualties from hunger, famine, disease, and starvation, six months out from any such strike.

Expect the National Command Authority to respond to that sort of thing by taking out every living thing down to field mice in the offender's territory, and then bouncing the rubble a few times just to be certain, and a lot sooner than six months' time.

We'd also likely put every other country on the planet on notice that any shenanigans whatsoever directed our way from that point onward would receive a similar response.

They've been kicking around the idea of retiring JSTARS for at least a decade now maybe even back before that. I'm surprised it's managed to stay this long.

Warfare is going to change dramatically in the next few years and you'll probably see lots of legacy platforms being retired and oddly enough a few pulled out of mothballs. The A-10 is sadly not going to continue unless congress holds a gun to the air force's head. When the new B-21 production ramps up look for the B-1B and the B-2 to be sent to an early retirement. It wouldn't surprise me to see F-15Es sent to pasture either. Harriers are going obviously. If the Navy gets a new frigate and even if not the LCS likely gets a well deserved trip to the dock. The Coast Guard might pick them up as well as try to pull a couple old Perry class frigates out of mothballs. Both would be fine for their purposes. Look for the current Zumwalt destroyers to be decommissioned and the program cancelled. The current vessels are a de-nutted clustercopulation and not the ship envisioned or promised.