More fun and games in Africa


When Lawdog and/or I tell our stories about growing up in and/or traveling through Africa, a number of American listeners seem to think we're pulling their legs.  They simply refuse to believe that such things can happen.  Well, I'm here to tell you, Africa is . . . well . . . Africa.  Things are different there.

I've been entertained recently by "Three Sips of Gin", the autobiography of Tim Bax, who served in the world-famous Selous Scouts during the Rhodesian bush war.  It's a very good read, and I highly recommend it to students of unconventional warfare. 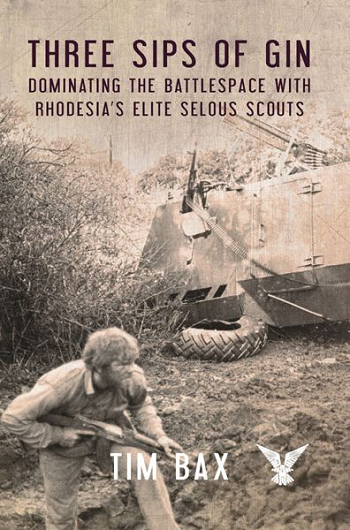 I met Mr. Bax on two occasions during the 1970's.  I doubt very much whether he remembers me - he was an officer, very busy with operations, while at the time I was an insignificant, nondescript teenager - but he was already renowned among his peers, who spoke of him in awed tones.

I've laughed at several of his Africa stories.  They ring absolutely true to me, and I have no doubt they're accurate.  Here's one to whet your appetite, from Mr. Bax's childhood in Tanzania in the late 1950's.

Each afternoon after school Mother would drive me and our German shepherd, Vikki, to the beach in Father’s old Peugeot whereupon we would waste little time plunging into the surf. Vikki loved the sea as much as I did and would seldom leave my side for as long as I remained in the water. She would paddle around me in tight circles keeping me as close to the shore as she could. It was as if she had taken it upon herself to become my personal lifeguard. Afterwards we would race each other back to the car, where, no sooner had I opened the passenger door, then she would jump in and vigorously shake herself dry. Everything in the car, including Mother, would be covered in a deluge of seawater and beach sand. Then Vikki would curl her wet body on the front passenger floor and we would wait patiently until Mother had calmed down enough to drive us home.

It wasn’t long before the floor of the car began to rust badly and one day it fell out completely. I was sitting in the passenger seat with Vikki between my feet when all of a sudden she disappeared from view and I was left staring through a gaping void in the car floor. Thinking that my seat might follow, I shouted to Mother in alarm. This caused her to swerve into the path of an oncoming bicycle being ridden by an old and very dignified-looking African. He managed to avoid being struck by veering off the road into a ditch, where he was set upon by Vikki, who thought him responsible for her sudden and unexpected exit from the car.

Motoring behind us was an elderly family friend called Major Reg Field, who stopped to see if he could be of any assistance. He was never without a hip flask of gin tucked into the inside pocket of his worn tweed jacket and it was the gin that saved the day. The fiery liquid had an immediate calming effect on the old African who was quite happy to have both his pride and his ego restored by a few hefty swigs. Having milked the occasion and the flask of everything he could, he tried to remount his bicycle, but succeeded only in falling back into the ditch. Mother seemed unsure about what to do.


There are many more stories in the book, although it's a lot more serious than just the funny bits.  If you like Lawdog's or my Africa stories, or want to learn more about one of the "forgotten wars" of the Cold War era, you'll thoroughly enjoy "Three Sips of Gin".  Recommended reading.

+1 for Three Sips of Gin.
Last year I spent several months recuping from knee surgery.
I had the time to read a bunch of books by former members of the Rhodesian Light Infantry and the Selous Scouts.
Three Sips of Gin stood out.
I was amazed to learn that the RLI often made two and three combat jumps a day. During the Vietnam war we Americans only made one large unit jump and according to one of our Drill Sargents it did not go well.
The RLI using their K-cars, blocking escape routes with troops delivered by parachutes, and large brass balls to kick some serious commie tail.
My favorite quote from one of my reads was from a black member of the Selous Scouts: He said, after particularly close action, "Don't you white people know that bullets can kill you?"

a number of American listeners seem to think we're pulling their legs.

I've heard one or two, and read Lawdog's book(s) and they don't strike me as out of the realm of possibility. But then I have seen The Gods Must Be Crazy and taken heed that despite appearance, it is more documentary. And having spent time in "da woods" and suchlike... the tamer parts seem almost familiar. I suspect the further one is from (alleged) civilization, the more probable the stories seem.

I was amazed they had to jump after patching their chutes from bullet holes and tears. Parachutes were expensive, parachutes not so much.

RLI had a trooper killed by a lion. Not many units can claim that.

Reading the book now. I'm thinking that pic of a padre is you

Ordered it. Maybe it should be read next to Alexandra Fuller's Don't Let's Go to the Dogs Tonight: An African Childhood — both set in 1970s Rhodesia.

I downloaded it per your recommendation and yes Africa is different, and my exposure was North Africa...and it still was different than anywhere else. I am reading the book now and it is real good.

Enjoying the book a great deal...I did notice, however, that when the author got married the service was conducted by Peter Grant, the chaplain for the Scouts. Was your career in Africa even more interesting than preciously thought?

@Gollios: That wasn't me - I was still a teenager when I first went up there. It was a relative.