In a blog post yesterday, my friend Cedar Sanderson asked "What are you reading?"  In her own list of books, she mentioned this:


I'd never heard of General Sharpe.  Intrigued, I did a quick search for information, and found this article.

Not many people today have heard of George H. Sharpe. I hadn’t heard of him until I happened to read a short CIA historical report that—in little more than a passing reference—credited him with having established “the first ‘all-source intelligence’ organization in U.S. history.” Sharpe was the director of the Bureau of Military Information of the Union’s Army of the Potomac during the Civil War. In contrast to all the dubious and romantic tales of femme-fatale spies and daring moonlight dashes on horseback that still choke the literature of Civil War espionage, the story of Sharpe’s unheralded reign as an intelligence chief is one of quiet, meticulous analysis—which nonetheless produced a series of coups that helped change the course of the Civil War from Gettysburg to the final siege of Richmond.

Although he never had more than about 70 men on his full-time payroll and though the intelligence challenge he faced was but a fraction of what a modern spymaster must confront, Sharpe nevertheless pioneered the fundamental principle of modern intelligence analysis and organization that remains valid today. As the CIA historical report notes, he “obtained, collated, analyzed, and provided reports based on scouting, spying behind enemy lines, interrogations, cavalry reconnaissance, balloon observation, . . . flag signal and telegraph intercepts, captured Confederate documents and mail, southern newspapers, and intelligence reporting from subordinate military units. This structured approach, which ended with the Confederate surrender, was not reinstitutionalized until 1947, when the CIA was created.”

Supplementing the intelligence derived from interrogations was a mass of reports from Sharpe’s own spies and scouts, from cavalry reconnaissance, and (less frequently but regularly) from intercepted enemy flag signal messages, purloined letters, and “open sources,” such as Southern newspapers. Although Sharpe did not directly command cavalry or balloonists or Signal Corps observation posts, he was vigorous in obtaining their reports and fitting them into his growing matrix of knowledge about the enemy. On occasion, officers from his bureau were informally attached to cavalry units, to help steer their intelligence-gathering efforts where they were most needed.

All of this data flowed into Sharpe’s headquarters, which initially had a permanent staff of about 18 men that traveled with the Army of the Potomac’s headquarters and reported directly to Sharpe. Over time, the range of topics covered was immense, encompassing not just tactical military intelligence but also political, economic, and psychological intelligence about the Confederacy: the price of flour in Richmond, the schedule of train departures, the state of civilian morale.

As its success and efficiency became known, Sharpe’s bureau grew, setting up “branch offices” throughout the Eastern theater, each with a team of some 30 to 40 scouts ... At its core the BMI [Bureau of Military Information] remained a small operation, but it was now a strikingly professional one that knew its business and produced a highly refined product that went directly to the top generals. “As a result of the BMI’s all-source capability,” writes Feis, the Union commanders “received not an assemblage of undigested bits of news seemingly of equal weight but true intelligence, the finished product of systematic information analysis.”

Unlike Pinkerton, Sharpe sent his scouts — most of them noncommissioned officers and enlisted men —right into the enemy military camps. Some masqueraded as smugglers or Federal deserters and hung about a Rebel camp for a few days before vanishing back across the lines; others, even more daringly, donned Confederate uniforms and posed as soldiers separated from their units or members of irregular Confederate forces like John S. Mosby’s rangers.

One especially daring BMI scout, Sgt. Milton W. Cline, managed to attach himself to a Confederate cavalry captain and rode the entire length of Lee’s lines a few days before the Battle of Chancellorsville. Among Sharpe’s papers are requests to Federal military authorities for tens of thousands of dollars in captured Confederate currency, for him to give to his military scouts and civilian spies to use.


There's much more at the link.  It's a long article, but very interesting, particularly to military history buffs and those with an interest in military intelligence (which, contrary to scornful popular opinion, is by no means always a contradiction in terms). 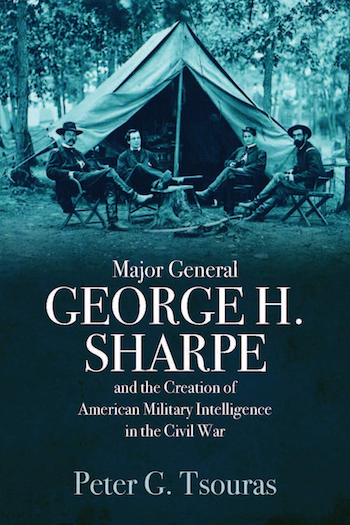 I'm looking forward to reading it.  General Sharpe sounds like a very interesting man indeed, and one of the hidden architects of Northern victory in the Civil War.

I found out about him - and the book - through an episode of the podcast Espionage which was an extensive interview with the author. I have been listening to podcasts at work while my hands are busy and I can't read, but I can still learn. Hope you enjoy it, I've been enjoying the read as he seems to have been a remarkable man.

Oldie, but a good overall review.

Sharpe started what has grown into a monstrosity with the intercene warfare between services... sigh...

I can't believe nobody has mentioned George Washington.
Spymaster, General of the Continental Armies, Political Operator, the guy was so remarkably talented at so many things which turned out to be necessary.
And moral enough not to abuse his gifts.

The spy ring he put together during the Revolutionary War, was vital to our success.

Fictional alternate history Civil War story, where Britain and France join the war on the Confederate side. This is where I first heard of Sharpe, as he is one of the main characters. Since then, I've bought the biography as well.