Three very important little books that everyone should own


One can argue until the cows come home about politics and partisanship.  Today the latter appears worse than ever, although I'm sure that's because we can't go back in time and see how bad it was in earlier generations.  Nevertheless, the "pressure groups" trying to influence society and politics are particularly active, and particularly vocal, at present.

Vilified by many people because of his perceived right-wing politics (which are often exaggerated and distorted by his critics), Vox Day has nevertheless been proved by events to be a very accurate observer of the extremist left wing of politics and culture.  He's just published a new book, "Corporate Cancer: How to Work Miracles and Save Millions by Curing Your Company", describing how they're trying to infiltrate and control corporations, as an extension of their political activities. 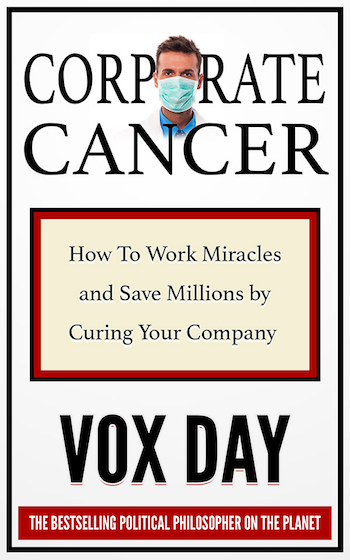 The corporate cancer of social justice convergence is costing corporations literal billions of dollars even as it drives both productive employees and loyal customers away, destroys valuable brands, and eats away at market capitalizations. From Internet startups to entertainment giants, convergence is killing corporations as they focus on social justice virtue signaling at the expense of good business practices, sales, profits, and retaining loyal customers.

In CORPORATE CANCER, Vox Day explains how you can fight social justice convergence in your own organization for both personal and corporate profit, and why you must do so if you want to keep your job.


Considering last week's headlines concerning Chick-Fil-A and its charity sponsorships, it's a pity the book has only just been published - otherwise that company's management might have learned something from it!

The book joins Vox Day's two previous analyses of how so-called "social justice warriors" operate.  Both have proved to be accurate so many times that it's almost superfluous to call them seminal analyses of what's wrong in our society.  Click on each cover image to learn more about the book. 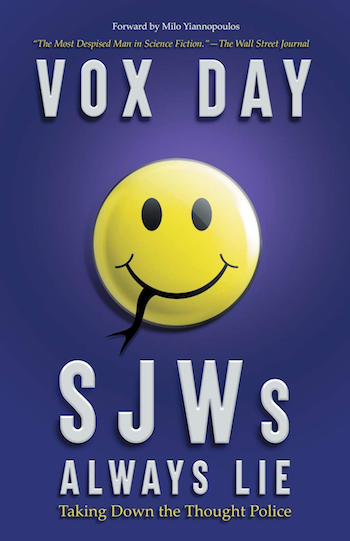 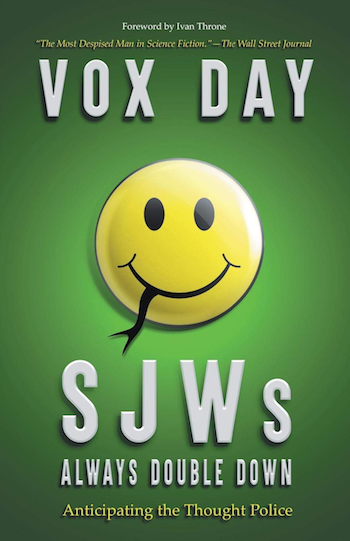 I don't agree with Vox on some issues, but I've always found him to be approachable, incisive and clear when discussing topics of mutual interest.  I'm not interested in the mud that's been thrown at him, or in attempts to vilify or defame his fans by association with him.  He can argue very cogently for what he believes in, and whether or not anyone agrees with him, that's his right and his privilege.  (There's also the very salient point that one may know a person by the quality of their friends - and their enemies.  He's made enemies of so many of the "politically correct" that he must be a very superior sort of opponent!)

The three books mentioned above are all relatively inexpensive, whether in e-book or print editions.  I respectfully suggest they belong in the libraries of anyone who's trying to understand modern political, social, economic or cultural interaction.  Their accuracy is their chief selling point.

(No, Vox isn't compensating me in any way for promoting these books.  I'm doing so because I've found them to be accurate far more often than not, and I've benefited from reading them.  That's why I recommend them.  I do have a professional association with him, through Castalia House, his publishing firm, producing some of my books in paper format, but that hasn't influenced my recommendation at all.)

What was Chick-fil-A thinking by hiring a known SJW executive? That's the issue right there. Why hire a snake to help run your Eden? Who is responsible for that move, and the SJW executive, both should be removed, the company should do a bloody apology to all it's many fans and get back to the strong Christian values that made their hate-chicken taste so very good.

But, it's still safer to get Chick-fil-A than Popeye's... for now.

Agree with Beans... Makes NO sense...

From what I've read, the founder, Truett Cathy, wouldn't have allowed this. However, he passed on in 2014 and it's his heirs that hired the SJW executive.

Vox Day is routinely defamed by remorseless harridans and vagabonds who are bent on reforming a productive society for who-knows-what, at gunpoint and with constant caterwauling, instead of forming their own shitty country. He does indeed have the correct enemies.

It’s almost a cliche that organizations with a legendary founder stray from the vision the founder had after they are gone. Walmart, The Navigators, Billy Graham Organization, Boy Scouts (and Girl Scouts), and now Chick-Fil-A.

It's my understanding that Chik-Fil-A, like many large corporations, does its donation programs through a corporate foundation, under contracts that run for a set length of time. The C-F-A contract expired. Not having it extended or renewed is another matter that certainly could be questioned.

Vilified by many people because of his perceived right-wing politics (which are often exaggerated and distorted by his critics), Vox Day...

It is his racism which he sometimes thinly veils, and sometimes displays nakedly, for which Teddy Beale is vilified. It does a disservice to decent right-wingers everywhere to cast them as being what he is correctly seen to be.

Saying that he correctly assesses the Left in no way addresses those issues.

I remain amazed that some of this corporate virtue signaling hasn't resulted in some epic shareholder lawsuits-Dick's Sporting Goods as a prime example.