I recently came across an extraordinary voice recording on YouTube that brought back many memories.  Before I embed it, a little background information is necessary.

South Africa bought ENTAC anti-tank missiles from France during the 1960's.  Like many such first-generation weapons, they proved pretty useless in combat, scoring some hits, but many more misses.  During the 1970's, MILAN anti-tank missiles were added to the inventory, including a version produced under license.  However, this was a short- to medium-range missile, and did not provide the long range or striking power the Army wanted for bush warfare.  Unfortunately, thanks to the 1977 arms embargo against South Africa, a more modern, more capable system could not be bought on the open market.

South Africa therefore turned to some creative industrial espionage.  It got hold of some American BGM-71 TOW missile systems, and set its engineers to work on them.  With the aid of foreign electronics and technical assistance, a version was developed that used a laser beam for guidance instead of a wire deployed from the missile, very similar to the Israeli MAPATS.  (Hughes would later develop a similar, but more advanced, version of such a round as the TOW-2B Aero RF.)

A production line was established for the new missile, which was initially known as the ZT3 (although why that name was chosen, I don't know;  it was later renamed the ZT3 Ingwe).  In order to prove its quality, pre-production test missiles were rushed into action in Angola in 1987, just in time for Operation Moduler, where they helped to destroy Angola's 47 Brigade on the Lomba River.  The first examples displayed a distressing tendency to "sky" (i.e. zoom upward, aiming at the sun, rather than following the laser beam):  but enough of them worked to score destructive hits on 3 Angolan T-55 tanks.  They also provided enough "combat testing" information to greatly improve the quality of subsequent production missiles.

Here's the audio from Major Hannes Nortmann's ZT3-equipped Ratel infantry fighting vehicle during that early engagement.  There's a fair amount of foul language, and some pretty tense moments as missiles malfunction, as well as jubilation when they hit.

And here's what one of those tanks looked like after it was hit. 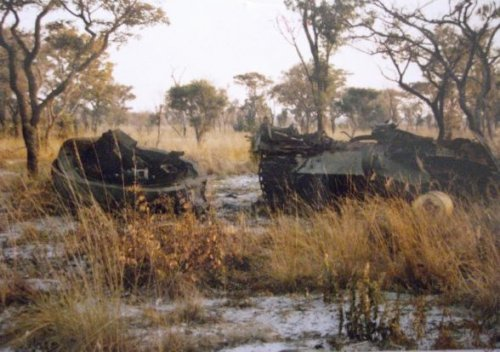 The reason I was so excited to find that audio recording was that I wasn't far away at the time.  It brought back a lot of memories!

The ZT3 is still in service, in upgraded form, and has been sold to several international customers.

Nice "after picture". Looks like about 8-10m horizontal travel, unknown m vertical lift. The technical description for what happened was "a good hit", followed by the emphatic request to get another one just like that.

Good reason to not take on a Ratel, because it will eat you.

So Peter, got no idea of your look, which of the men in the photo would be your lookalike.

You know it's a good hit when the fuel and ammo take the turret off. A trait it seems most Soviet armor shared....