A few weeks ago, I published an excerpt from the late Brigadier Dick Lord's history of the South African Air Force, "From Fledgling to Eagle".  It was well received, particularly because it was very funny, and I had several requests for more of his tales of flight and fighting in the service of three different countries.  I'm happy to oblige, and I'll post more snippets from his books at odd intervals in future.

This tale comes at the end of his advanced training as a pilot in Britain's Fleet Air Arm, during the very early 1960's.  It's taken from his autobiography, "From Tailhooker to Mudmover", which is well worth reading for any aviation enthusiast. 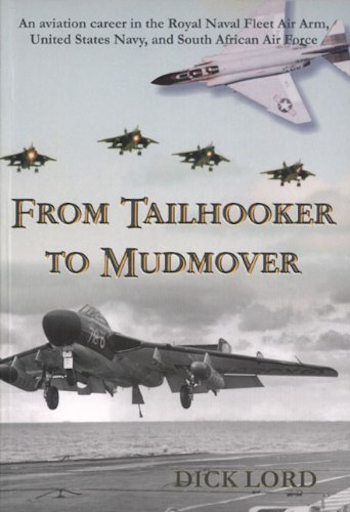 Winter can be very severe in the 'frozen' north of Scotland. To protect its aircrew the navy insists they wear immersion suits on all flights during the winter months - a wise precaution that has saved many lives over the years.  However, the 'Goon Suit' is not the easiest piece of clothing to put on or take off.

Getting dressed in the morning is similar to a military operation, which requires proper planning and minute attention to detail. This detail includes ensuring that one's necessary bodily functions are completely attended to before the final layers of suit are applied.  The manufacturers, in a gesture of kindness to the occupants, modified the suits with the addition of a 'pee-tube'.  It was always a wise precaution to check, before flight, that the attached waxed cord securely bound this opening at the crotch.

Saying cheerio to the Lossiemouth controller, we turned south and started the long climb to 41,000 feet.  This took 21 minutes in the old Venom, and during the climb, physical science took effect. As the aircraft ascended, the outside air temperature dropped by 2 degrees Centigrade [about 3.6 degrees Fahrenheit] for every 1,000 feet increase in height. However, inside the cockpit, the heating system maintained a comfortable temperature.

A more noticeable scientific phenomenon became increasingly apparent as we climbed. As our height increased, the outside air pressure decreased. As this outside pressure decreases, the effect on the human body is similar to an inside pressure increase. Now, I had consumed many cups of coffee during the morning, and the higher we climbed the greater became the pressure differential. As we leveled off at the top of the climb, I spoke to Nick on the intercom, and told him to look at his charts and find a place to land. In answer to his very surprised "Why?" I told him that I needed to pee.

We were sprogs eager to complete our training so, after a discussion, he convinced me that we could not land just anywhere to have a pee. This decision did nothing to relieve my ever-worsening situation. I could not cross my legs because of the offending control column; things were becoming critical.

Looking around the cramped cockpit for some form of salvation, my eyes settled on Nick's helmet. My request was flatly refused. Next I looked at the Cape leather flying gloves we were wearing. Mine was an older pair and the stitching at the end of the fingers was coming adrift. Nick's, however, were brand new and he grudgingly removed one after I convinced him how real the emergency had become. With this glove I held the solution to my problems, but nothing in life is easy!

I was wearing a 'goon suit' with all the required underclothes. I was strapped into my parachute with lap, shoulder, and waist straps. I was also strapped into the ejection seat with a further set of lap, shoulder and waist straps. Just below my knees, leg garters attached to the seat pan, and across my chest hung my main and emergency oxygen hoses. A radio lead attached my helmeted head to the aircraft. Between my legs was the control column, which protruded from the cockpit floor, and my feet extended below the instrument panel on the rudder pedals.

An additional complication was that the Sea Venom did not have an automatic pilot. This meant that Nick would have to lean his left arm across me, while I endeavored to unstrap and ease the internal pressure. Having never flown an aircraft before, he would then have to fly the jet left-handed, at 41,000 feet and at 420 nautical miles per hour!

This was the plan, and in accordance with the principles of war, we maintained the aim. While I unstrapped, Nick proceeded with his first flying lesson. We wandered all over Scotland until at last I managed to get the glove, and everything else, into the right position. My intention was to relieve the pressure just a wee bit, if you will pardon the pun, but once you start these things you can't stop.

A warm sense of well-being replaced the excruciating anxiety suffered during the previous 15 minutes. At last I started to see the amusing side of the whole affair. Not so Nick! On completion of the task I had filled the glove to the brim. Feeling relieved, I told Nick he would have to hold it because I needed both hands to fly the airplane. Once again, Nick refused, but he agreed we had to do something. The novelty of his first flying lesson was quickly wearing thin.

With a spark of genius he said, "Throw it out of the window." After discussing the ramifications, I agreed. The Venom has a triangular window on the left-hand side of the windscreen, which is locked with a large knurled knob before take-off. We remembered to depressurize the cockpit before I opened the window. As soon as I had it open I raised the brimming glove and pushed it out. Right then we learned a very important lesson! Never, ever, try and push a full glove into a 420 nautical mile an hour headwind! There was an immediate blow-back into the cockpit, but fortunately, with the temperature now a frigid -63 degrees Centigrade [-81.4 degrees Fahrenheit], it froze on contact. I even had to scratch a little hole in the ice on the windscreen to see where we were going.

Being sprogs, we never dared to try to claim a world record; our future was too precious to give away our secret. In retrospect, if it was not the world's highest un-pressurized pee, it was almost certainly the highest free-fall drop of a frozen glove on record. If any reader happens to spot a single glove when passing through the border town of Carlisle, it belongs to Nick.


My own adventures with airborne urination have fortunately all involved airline toilets.  There were a couple of occasions when I could have used a pee break aboard South African Air Force helicopters, but the crew chiefs would threaten us with extreme violence if we peed out of the open doors as we flew along, because they claimed everything would be blown back inside, and all over the occupants.  Discretion being the better part of urination, we complied.

To my experience, American C-130s have a piss tube. British C-130s have a toilet. Of course, they also have a tea service, an oven, and remarkably good in-flight meals.

Flying a C150 over the Sierra's I had to pee. Luckily I had an empty Snapple bottle. Even luckier was the bottle volume was larger than my bladder volume.

I think I would enjoy reading the two books you've cited, but I looked for them at Abebooks, and the prices are frightful.

They must have had extremely small print runs.

Warning! Very NSFW!
Be sure to check their work though, they revived the tradition of fighter pilots songs.