A great new anthology on PTSD, its causes and effects

Friend and fellow author and blogger Cedar Sanderson has compiled an outstanding anthology of stories about post-traumatic stress disorder (PTSD) and its effects on people.  They're in the form of fiction, but very much based on fact.  You'll know some of the authors, particularly Lawdog and Old NFO (J. L. Curtis), whom you've seen mentioned in these pages on several occasions.  (We live very near to each other, and see each other several times a week.)

The anthology is titled "Can't Go Home Again".  It's already reached #1 New Release in its category on Amazon.com. 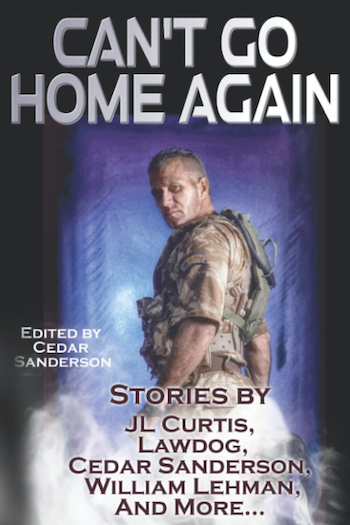 Men and women who lay their life on the line never escape unscathed, and when the time comes to return home, they find a wall between them, and loved ones. These tales follow those who gather the hope to begin healing, and tearing down the walls that have sprung up between them, and their loved ones. No one ever said it would be easy...

As a combat veteran, allow me to assure you that it was a very uncomfortable experience to read some of the stories in the anthology - but a valuable one.  I've had my share of post-combat stress, as I'm sure many of my readers can also say.  This is a powerful book, and a great tool to help us air out some of those old compartments in our minds that we've long since locked and thrown away the key.

My wife has an interesting perspective on the anthology.  I'll quote from her blog review:

Look, I'm still not comfortable applying the PTS label to myself. But the first step to understanding even better what makes Calmer Half tick, much less most of the men and no few of the women in my life, was also the extremely uncomfortable first step to realizing why I do certain things. Or don't do certain things. Or have so much avoidance of doing certain things that it was plain as day to the people around me, and they figured I was perfectly well aware and just didn't want to talk about it.

I'm working on it.

It's led to more than a few raw, but cathartic conversations, as friends have taken my own struggle to bare their own emotional wounds in turn. This adult version of "You show me yours and I'll show you mine" sucks, you know? But better than not talking about it, and far better than suffering alone and in the silence behind the facade of everything's under control.

And given the number of friends who are authors, when we bare our wounds to each other, and finally let it out, we bleed fiction. Stories are, after all, a way of talking about pieces of the truths you can't say out loud with the actual names and dates, re-arranged for places that never were and people who are creations of a mind trying to process far more than our surface consciousness is aware of.

After we both read Arsenal of Hope, Cedar Sanderson and I had long conversations about PTS from sources other than combat, which while it doesn't manifest in exactly the same way, it certainly rhymes. And so, too, does the process of healing. Including the suck of dealing with the demons in your head, that you can't cut off or leave behind like twelve inches of hair or the exes in another state.

And somewhere along the way, one or the other of us groused about the lack of honest representation in fiction of what PTSD's actually like... and of fiction that showed moving forward, and getting better.

There's more at the link.  You should also read her earlier discussion about PTSD, two more extremely valuable books on the subject, and our conversations about it.

I was invited to contribute to this anthology, but couldn't come up with a suitably "happy ending" story for it.  My experiences tended to be on the rather less happy end of the spectrum, as were those of too many of my comrades in arms (for example, Gavin).

Nevertheless, I'm very grateful to Cedar for having nurtured this anthology to publication.  I think it's an important book, one that will not only entertain, but also help many people.  Highly recommended.

Thank you Peter. This was a project I felt needed to happen, and I am humbled by all the support I was given along the way. It’s so good to see it out there and doing well. I do hope it will be useful to someone.

My son did two tours in Iraq that he almost never talked about, but he always says he's doing well.

My husband and I joined the Air Force in 1973. Just before the "official" end of the Viet Nam war. And while that earned us a National Defense Service Medal, we would NEVER claim that as we didn't go.
When I did my first short tour at Clear AFS in Alaska, I met a Viet Nam vet and we talked occasionally in the base "pub". He talked only remotely about the war, but I could tell and it reinforced my "I am not a Viet Nam veteran.

I did a short tour in Korea, and even though the VFW tells me that makes me a Korean war vet, I don't see it that way. It was 1987-88 after all.

Somewhere along 20 years I ended up with a second NDSM.
I did not volunteer for any of the policing action when Hussein invaded Kuwait. I stayed in Okinawa while others did go and came back changed.

So I don't have any True PTSD; but after the tornado hit our home - and I still praise God for keeping us all safe that night - I think I do have a bit of PTS.

I'm not where I thought I'd be at 69, but I praise God for walking with me.

You all be safe and God bless.

Thanks Peter. I DO hope it helps.

Only one review so far.

Hopefully more readers will do a review.

Bought it yesterday. Finished it today. Well worth it.

Thank you very much for the recommendation.