Talk about condescension and contempt! Bigotry on display

One of the most mind-boggling results of Tuesday's elections in Virginia and elsewhere, in which left-wing candidates did not fare well, has been the reaction of the progressive ultra-liberal left to their loss.  Typical of it has been this tweet from someone using the name Helen Carter: 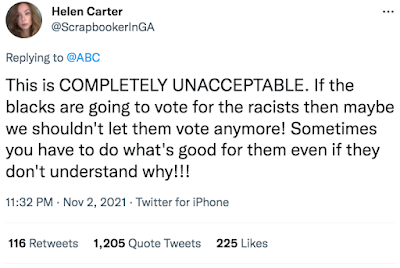 I thought at first that this had to be a parody Twitter account.  I couldn't believe that someone could be so blind to reality (not to mention so unconsciously racist) as to truly hold those opinions.  However, an examination of Helen Carter's Twitter account shows that she posts equally daft opinions on other topics.  She's living in a far-left-wing version of cloud cuckoo land.  She's five cents short of a nickel when it comes to reality.  Note this pinned tweet: 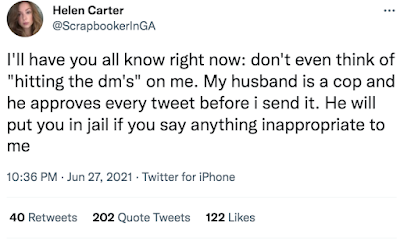 Talk about the fallacy of invincible ignorance!  As Robert Heinlein put it, "Never attempt to teach a pig to sing; it wastes your time and annoys the pig."  However, Ms. Carter is far from alone.  There are many others like her.

Do any of you, readers, have more examples of such ideologically-blind-to-reality frustration, on either the left or the right of the political spectrum?  Both sides are equally guilty of them, I'm sure.  If you do, please share them with us in Comments.

i got nuthin, as I live in a very rural area, way FAR away from our state's gummint-critters, and only having one some-what local newspaper and one very local weekly paper.

Say the same thing about women voting and watch her scream and foam at the mouth.

You forgot arrogance. They are incapable of thinking they are wong and will make you do what they think best through any means they can

“They have learned nothing, and they have forgotten nothing.” --Talleyrand

That's what Leftists *really* think of blacks: Stay on the plantation and do as you are told like good children. If you don't you aren't *really* black.

Yep. Apparently LBJ was mostly right, but his proclamation regarding Blacks voting Democrat seems to be wearing a bit thin.

That would be "If I sign Civil Rights, the (name for blacks that white people not Democrat aren't allowed to use) will be voting for us for X number of years."

you know what? i don't want to live in zimbabwe or guatemala or venezuela. if i did i'd move there. if that makes me a racist i guess i'll just have to live with it.

Trailer For Sale Or Rent said...

I think it's cute that she can't send a tweet unless her husband approves it first...

"If the blacks won't vote the way that rich white liberals tell them to, they shouldn't be allowed to vote..." Maybe they should just have 3/5th's of a vote, and their masters should "vote" them. The lady is a racist, plain and simple, nothing more, nothing less.

Are you quite sure it's not just a long-extended parody account? If she's that daft in a serious way, one would have to wonder how she can even operate a computer at all. I still think it might be just one big long sarcasm stream.

Is it possible Titania McGrath is posting under a pseudonym?

When I was five or six I remember telling a bully that my dad was in the Navy and would come and beat up his dad. Is she five? My husband will put you in jail if you say anything mean to me? Really?

I suspect parody. Or a troll.

China Joe: "If you have a problem figuring out whether you're for me or Trump, then you ain't black."

China Joe on Barak Obama: “I mean, you got the first mainstream African-American who is articulate and bright and clean and a nice-looking guy,” he said. “I mean, that’s a storybook, man.”

While some may call Biden a parody of a president, he is the leader of the democrat socialists, and they take their cues orders from his administration. Respected "news" organization parrot the idea that Blacks that don't vote for the democrats aren't truly black. So I don't think this is a parody twitter account at all.

I honestly can't wrap my head around the existence of a woman that unaware of how her tweet-stream sounds. Like some 1800s slave owner, griping about how ungrateful the slaves are.
Please tell me this is Tatiana McGrath's new jape.

After reading a lot of this individuals tweets, I'm fairly certain that this is a major troll just trying to stir poop.