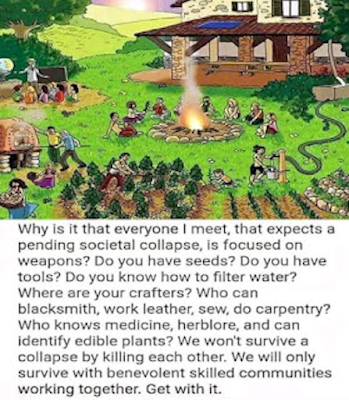 However, he believes it leaves something to be desired:

Please point to one societal collapse from the past 200+ years where these skills trumped combat skills.

This point is certainly not putting down skills of growing food and general "survivalism," but is pointing out that combat skills have been mandatory in every collapse in recent history.

I'd like to confirm his perspective.  I've seen societal collapse in ways that are infinitely worse than anything we've experienced (so far) in the USA.  I've traveled through most of sub-Saharan Africa, and seen civil wars and conflicts, actual wars, tribal conflicts, and what have you.  I've "been there and done that" for years, and written about some of that in these pages from time to time.  I'm here to tell you, those with food, fuel and other supplies are always, repeat, ALWAYS targeted by those who have weapons.  It's a fact of life.  I've never, ever seen a situation of unrest or collapse where "those who have" got away unscathed from "those who have not".

This applies to both individuals and mobs, and to both gangs and governments.  If you have something they want or need, they will come after it - and after you, if you don't give it up right away.  This can be a nasty surprise to those who think the rule of law will protect them.  The rule of law is only skin deep.  In fact, the forces of "law and order" will be among the first to come after the "haves" when things go pear-shaped.

If you think those things won't happen, you're living in cloud cuckoo land - a fool's paradise.  I've seen them all, repeatedly, in many countries, and I fully expect to see them here as well if things go any more wrong than they are already.

The only time - I say again, THE ONLY TIME - I've seen the "haves" come out of such a conflict relatively intact (albeit usually with at least some damage and casualties) is when they applied a Biblical concept:

When a strong man, fully armed, guards his own palace, his goods are in peace.

It's up to you to defend, protect and preserve your family and loved ones, and the supplies and tools they need to survive and thrive.  If you don't, nobody else will.

What's more, you probably won't be able to do that on your own.  If a mob comes down the street, looting and burning, one or two individuals won't be able to hold them off.  It'll take cooperation, coordination and working with others to defend everybody's property and possessions.  You need to be thinking about and planning for that now, while there's still time to do so - and also taking into account the danger that the authorities may side with the mob, and may not want you to defend yourselves.  Beware surveillance technology that might be used against you.

I'm not expecting total societal collapse anytime soon;  but I am expecting limited, localized collapse in some urban centers, particularly those with a broad mass of impoverished people who are dependent on one or more forms of state aid (EBT, food stamps, welfare, Social Security, whatever) to survive.  I predict disruptions in those forms of aid, particularly as aid budgets are overstressed by millions of illegal aliens and others who refuse to work.  Couple that with stores closing due to theft and other factors, and entire neighborhoods may run short of essentials.  That may lead to unrest and turmoil in those areas, and those evils may spread from there to neighboring suburbs and towns.  Look for them to be aggravated and intensified by ideological and political agitators such as Black Lives Matter, Antifa and their ilk;  and look for police to back off and let them riot, due to pressure - if not direct orders - from local administrations.

If I'm wrong about all that, great!... but if I'm not, you'd best start thinking right now about how that might affect you, and how you're going to deal with it.  If you live near such areas, I'll lay odds it's coming to you sooner or later.

If you aren't already reading Recce Rifleman's blog, I recommend it.  He's very focused on the practical rather than the theoretical, and I find myself nodding approvingly at a lot of what he has to say.  I've learned rather too much for comfort in the School of Hard Knocks, over the course of rather too many years.  From that background, I'd say he's right on the money more often than not.

What haunts the minds of the left in the wee hours of the night is the thought that despite their fondest hopes Kyle Rittenhouse was not some unique aberration within the citizenry.
No, rather there are tens of thousands of Kyles out there in flyover country. And millions of their older brothers and sisters. All just wanting to help out their neighbors and their society, and willing to do so while using every available means to protect themselves.

The rest of the sentence is important; as well as the following sentence.

21. When a strong man armed keepeth his palace, his goods are in peace:
22. But when a stronger than he shall come upon him, and overcome him, he taketh from him all his armour wherein he trusted, and divideth his spoils.

Your first point is a good one. When the SHTF, I envision the government redistributing supplies from White people by force.

@Michael: We've discussed almost all those points at length in previous articles. There's no need to make this comment thread about survival in general, and doing this, that or the other. Please concentrate on the point at issue, which is specific and important in itself. We can all benefit from discussing it in more detail.

Those who beat their swords into plowshares, will plow for those who don't.

Peter, there are days I would love to see you have a debate/discussion with Michael Mallice about anarchism. (Though with him I'm never sure how much is sincere vs performance.)

Ok Peter I am removing my unneeded effort to explain the common lacks of most preppers I know.

When the window is blown out and the sleet is crashing in they can stay warm with their piles of hot brass.

My thoughts are to forget about gardening and raising animals in order to be self-sufficient after a societal collapse. I believe it is better to stockpile provisions that can be kept in a secure location out of sight, than to try and do the whole homestead thing to prepare for a societal collapse. If you want to raise a garden or some animals to supplement your grocery bill, and/or to have healthier alternatives to what supermarkets have to offer, that is great. However, unless you live in a remote area, your crops and animals will likely be taken from you, or simply destroyed, in the event of a societal collapse. What many people don't consider, is that there are those who would just as soon destroy something they can't obtain, with the mindset that if they can't have it, then nobody can. Depending upon where you live, it is more likely easier to defend your house, than it will be to defend your house, plus outdoor things like crops and animals.
And, don't forget to stock up on fire extinguishers, in addition to guns and ammo, in order to protect what you have. Remember, don't attempt to use water to extinguish a fire caused by flammable liquids that came through your window in a glass container with a flaming rag stuffed in it.

Thank you for the kind words.