The voting for the 2008 Darwin Awards is over, and the winners are up on the Awards Web site.

For those who've not encountered them before, the Darwin Awards are described as follows:

The Darwin Awards commemorate individuals who protect our gene pool by making the ultimate sacrifice of their own lives: by eliminating themselves in an extraordinarily idiotic manner, thereby improving our species' chance of long-term survival. In other words, they are cautionary tales about people who kill themselves in really stupid ways, and in doing so, significantly improve the gene pool by eliminating themselves from the human race.

These individuals carry out disastrous plans that any average pre-teen knows are the result of a really bad idea. The single-minded purpose and self-sacrifice of the winners, and the spectacular means by which they snuff themselves, make them candidates for the honor of winning a Darwin Award. The terrorist who mails a letter bomb with insufficient postage deserves to win a Darwin Award when he blows himself up opening the returned package. As does the fisherman who throws a lit stick of dynamite for his faithful golden retriever to fetch and return to him. As do the surfers who celebrate a hurricane by throwing a beachfront party and getting washed out to sea.

Named in honor of Charles Darwin, the father of evolution, the Darwin Awards represent examples of evolution in action by showing what happens to people who are unable to cope with the basic dangers of the modern world. These ironic tales of fatal misadventure illustrate some of life's most important lessons.

First place for 2008 went to a Brazilian priest (whom we mentioned before on this blog), Fr. Adelir Antonio de Carli.

(20 April 2008, Atlantic Ocean, Brazil) . . . a Catholic priest recently ascended towards heaven on a host of helium party balloons. Adelir Antonio de Carli, 41, was attempting to set the world record for clustered balloon flight to publicize his plan to build a spiritual rest stop for truckers. 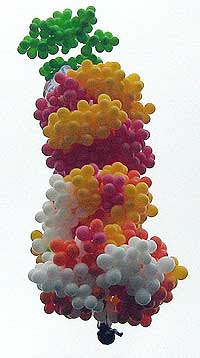 Sitting for more than 19 hours in a lawn chair is not a trivial matter, even in the comfort of your own backyard. The priest took numerous safety precautions, including wearing a survival suit, selecting a buoyant chair, and packing a satellite phone and a GPS. However, the late Adelir Antonio made a fatal mistake.

He did not know how to use the GPS.

The winds changed, as winds do, and he was blown inexorably toward open sea. He could have parachuted to safety while over land, but chose not to. When the voyager was perilously lost at sea, he prudently phoned for help. But rescuers were unable to reach him since he could not use his GPS! HE struggled with the control panel as the charge on the satellite phone dwindled.

Instead of a GPS, the priest let God be his guide, and God guided him straight to heaven. Bits of balloons began appearing on mountains and beaches. Ultimately the priest's body surfaced, confirming that he, like Elvis, had left the building.

The kicker? It's a Double Darwin. Catholic priests take vows of celibacy. Since they voluntarily remove themselves from the gene pool, the entire group earns a mass Darwin Award. Adelir Antonio wins twice over!

Second place went to (the late) Ivece Plattner of Italy.

(July 16, 2008, Italy) Ivece Plattner, 68, was queued at a traffic light in his Porsche Cayenne sportscar. Before one reaches the light, there is a railroad crossing. As you might imagine, given Murphy's law, a train was coming.

The man did not let the queue progress forward far enough before he crossed the railroad. The safety bars came down, leaving the Porsche trapped on the rails. It took the driver awhile to realize he was stuck, according to witnesses. Finally, he jumped from the car and started to run -- toward the oncoming train, waving his arms in an attempt to save his car!

The attempt was successful. The car received less damage than its owner. He was pushed hard enough to land 30 meters away, and attempts to revive him were unsuccessful.

The moral of the story? Momentum always wins.

Third place went to an unnamed (and deceased) Czech thief.

(8 March 2008, Czech Republic) Steel is valuable, especially the high grade alloy used in steel cable. Scrap metal dealers do not ask questions. They pay in cash. And a good supply of cables can be found in elevator shafts.

This particular goldmine was a towering shaft inside an empty grainery near Zatec, 40 miles northwest of Prague. The cable was tightly fastened, and the far end of it disappeared into the shadowy distance above.

After substantial wear and tear on a hacksaw, our man finally cut through the strong steel cable. At that instant, the counterbalance, no longer held in check, started to move silently downwards, accelerating until it reached the bottom of the shaft.

Result: one proud winner of a "terminal velocity" Darwin Award.

There are twenty award winners listed for 2008. You'll find them all at the Darwin Awards Web site, along with winners from previous years. Entertaining - if sometimes gruesome! - reading.