An overweight inmate who tried to escape a Brazilian jail through a hole smashed through a prison wall had to be rescued by firemen after he got stuck halfway through. 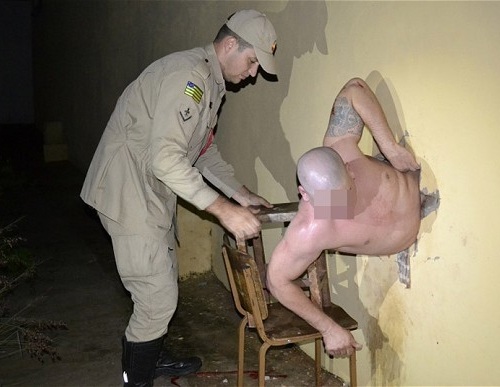 The well-built tattooed convict tried to follow one of his smaller fellow prisoners who had already made a bid for freedom through the gap.

But he was left screaming for help when he became wedged while others tried to force him through the hole they had made with a metal shower pipe.

If he was in a US prison, next thing you know he'd be suing the prison for feeding him too much food of inferior quality, thereby making him too fat to fit through the hole!

Down there,they are liable to 'fix' the problem permanently by just taking him out and shooting him...

Note to prison officials. Monitor this inmate carefully, particularly if he embarks on a 'get fit' course.