A few days ago I posted about a screaming deal on a high-powered flashlight at Home Depot.  Unfortunately, supplies appear to have been very limited, so whilst some readers were able to get their hands on them, others missed out.  I hope Home Depot imports more of them - at the price (under $20 for a 550-lumen LED flashlight) they were a real bargain.

Several readers have asked me to nominate low-cost alternatives, since they couldn't get that particular flashlight.  The good news is, even if you're on a tight budget, there are some very good deals out there right now.  I'm not going to speak of those I haven't personally bought, because I don't do that - if I recommend something, you can be sure it's because I've used it and like it.  I also don't make any commission or referral fee on anything I recommend.

Two flashlights come to mind at once, both available at Wal-Mart.  The first is this small (pocket-size) 100-lumen unit, which is claimed to have a 9½ hour run time.  It's the Model 100L from Ozark Trail: 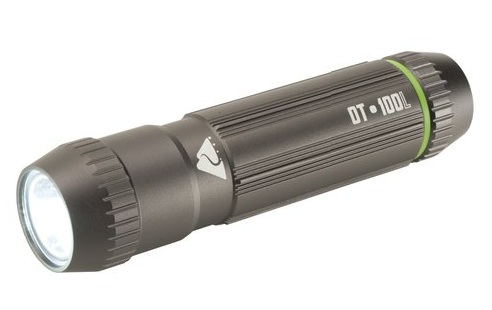 It's made of aluminum, small and handy, very similar in size and weight to the well-known Surefire 6P 'tactical' flashlight, which set the standard for such units when it was introduced.  It's also surprisingly powerful, to my eyes more powerful than the Surefire unit, even though it uses three standard AAA batteries instead of the CR123A lithium cells of the latter.  It costs only $10.88 at my local Wal-Mart, which in my opinion is a steal.

A larger and more powerful option is this Coleman unit, rated at 137 lumens but appearing very much brighter in use thanks to a well-designed reflector.  It's named - wait for it - the 'Max Bubba' model! 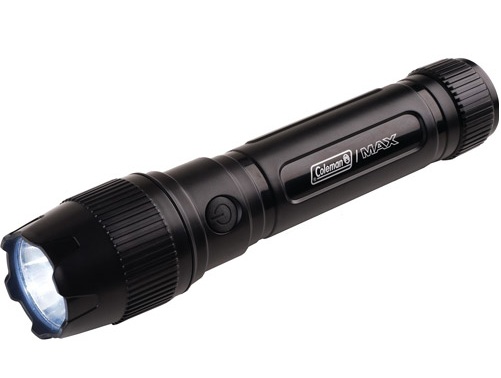 I've no idea who decided to give it that name, and I hope he or she suffers appropriate punishment:  but despite the moniker, it's a very useful flashlight.  I've tested it alongside the Home Depot unit referred to earlier, and despite having only a quarter of the latter's lumen rating, it's almost as effective in use, throwing its light to a similar distance.  It projects more of a 'spot' than a 'flood' beam, which helps.  It's made of plastic rather than aluminum, but appears to be solidly built.  It costs only $26.88 at my local Wal-Mart, which is - to my mind, at least - good value for money.  It runs off six AA cells (included in the price), which are available almost everywhere at low cost.

Coleman also offers the LED CT50 model, rated at 500 lumens, very similar in size and appearance to the 'Max Bubba' model shown above, but made of aluminum rather than plastic.  It's available at Wal-Mart for $49.88.  However, I don't recommend it, because in my testing it doesn't appear much more powerful or effective than the much cheaper 'Max Bubba' model. It's also considerably overpriced, in my opinion, compared to the equivalent-power sub-$20 unit from Home Depot.

(While on the subject of lumen ratings, be aware that manufacturers often 'shade' them in their favor.  I have friends in the consumer and tactical electronics fields, all of whom warn that as far as Chinese manufacturers are concerned - which would include all of the flashlights mentioned here - one should automatically discount the claimed lumen rating by 20% to 30%.  I'll take their word for it.)

I own both of the flashlights I've recommended here, and I can vouch from personal experience that they're worth having.

Costco has a three-pak of a tactical flashlight for less than $20. Black (of course) aluminum. uses three AAA batts. 160-200 Lumens. Multi-mode tail-cap switch. Crenelated lens bezel (they stopped doing the tail crenelation, and recessed the switch, in the latest version. Also, they dropped the manual focus, for a smaller unit).

Unfortunately, the three AAA flashlites are a bit larger than the cr123 types like the Surefire P6, so they don't fit the same holsters, normally. Also, the reflector/head unit is slightly larger diameter than a P6.

Run time could be a bit longer.

They are tough. Dropped one out a second floor window onto concrete. Bent a crenelation. Lens ok, light still works.

Out of six sets, there was one bad switch.

I have about 10 of these...car truck drawers in house, workshop pockets, etc.

THere are a LOT more available at the main website.

No connection, just decent flashlights. Sadly, at that price, not american made.

I have some of the Costco Cree XPG LED lights also. Good light but not nearly as bright as the HD models. That said, they don't use expensive batteries (Duracell "C" cells, $12 for 8 at HD) Very happy with them.

I was able to snarf up the last 8 of the 550 lumen lights at my local HD. Hemmed and hawed for an hour if I wanted to make the trip (1 hr) as I had just made my bi monthly town run the day before.

Saw they were out on the HD website and knew I'd regret not going so I did. Very happy about that.

Funny thing, they had 3 empty 20 slot display boxes for them and only 8 in one other box.

Got to the cashier and she asked why so many @ $20 ea, I told her about the brightness and she said several other customers had told her the same thing that day. She said she might have to pick on up.

Alas, I informed her that I had the last of them and she'd have to wait for a new delivery. She said they had only arrived 2 days earlier. 80 Flashlights sold in 2 days.

Thanks so much for the heads up and review. Glad I got em.

I managed to get the last one at the HD in Salem NH yesterday. I'd like to get three more. Then I'd have one for each car and one for each nightstand. I hope their buyer(s) see this and realize that they are on to something. It would be nice if this became a regular stock item. Hint, hint, HD...

Thanks for the alternate suggestions. I'll look into them next weekend.

I just received an Ultrafire C1 (probably from http://www.meritline.com, but I'm not certain), and it's a handheld sun. About $10, as I recall. Takes CR123's.