Earth from space, at night


NASA has released some spectacular images taken by the Suomi National Polar-orbiting Partnership (NPP) satellite.  They show the Earth at night, lit up in some places by the artificial light generated by our species, but in most places dark and seemingly lifeless.  In a press release, NASA said:

The night side of Earth twinkles with light. The first thing to stand out is the cities. “Nothing tells us more about the spread of humans across the Earth than city lights,” asserts Chris Elvidge, a NOAA scientist who has studied them for 20 years.

“City lights provide a fairly straightforward means to map urban versus rural areas, and to show where major population centers are and where they are not,” says William Stefanov of the International Space Station program. 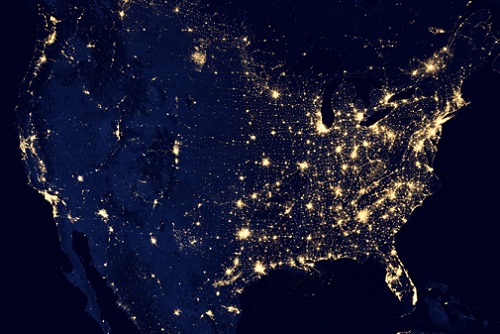 Away from human settlements, light still shines. Wildfires and volcanoes rage. Oil and gas wells burn like candles. Auroras dance across the polar skies. Moonlight and starlight reflect off the water, snow, clouds, and deserts. Even the air and ocean sometimes glow.

The Suomi National Polar-orbiting Partnership (NPP) satellite — launched in October 2011 by NASA, the National Oceanic and Atmospheric Administration (NOAA), and the Department of Defense — carries a low-light sensor that can distinguish night lights with six times better spatial resolution and 250 times better resolution of lighting levels (dynamic range) than before.

This looks like the 2012 election results. Brightest lights locate Mr. Obama's supporters. Amazing how the bright spots can be produced by so many dim bulbs.

Ditto! My thought exactly. And who is screaming about energy use?