I mentioned the Baltic Dry Index a year ago in this article.  For those who aren't familiar with it, Wikipedia describes it as follows:

The supply of cargo ships is generally both tight and inelastic—it takes two years to build a new ship, and a ship's fixed costs are too expensive to take it out of circulation the way airlines park unneeded jets in deserts. So, marginal increases in demand can push the index higher quickly, and marginal demand decreases can cause the index to fall rapidly. e.g. "if you have 100 ships competing for 99 cargoes, rates go down, whereas if you've 99 ships competing for 100 cargoes, rates go up. In other words, small fleet changes and logistical matters can crash rates..." The index indirectly measures global supply and demand for the commodities shipped aboard dry bulk carriers, such as building materials, coal, metallic ores, and grains.

With that in mind, take a look at this graph. 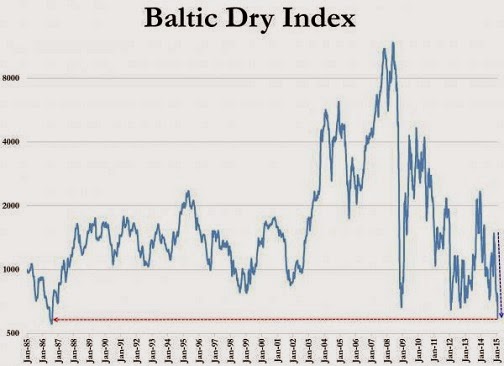 Right now, the Baltic Dry Index is lower than its lowest point during the financial crisis of 2007-2008.  That should worry us.  In fact, in economic terms, it should scare the hell out of us.  As Zero Hedge puts it:

One or two more days like this and it will be the all-time low ...

What this means is that companies and nations are simply not ordering or shipping anything like the quantities of goods needed to sustain economic activity at its present level, let alone provide growth.  The Christmas shopping season was difficult for retailers, as consumer demand simply didn't materialize.  This is our warning sign that things are going to get a lot worse over the next few months.

Next, consider that 'Consumer spending comprise[d] 71% of the US economy in 2013'.  If that falls off even further, where does it leave our economy?

You figure it out.  Just don't take too long about it, because otherwise events will overtake you.

These guys should contact our local TV news as according to them the economy is booming and everything looking great. There is a little problem with the economy but they decided that was because of the cold weather.

If all the economic indicators are foretelling dire doom, why aren't we seeing big bank collapses and the sky falling in large chunks of bailout funds into Wall St.?

I'm not being rhetorical or sarcastic here. Is it that the TBTF organizations are just too smart to let anyone know they're failing? Is it going to be nations, this time around? Is the rot just underneath the surface, and one day we will fall through the wooden floorboards of our previously successful economy? Or is it just going to be long periods of misery for a long time, i.e. the world ending not with a bang but a whimper?

I agree it looks bad. I'm just wondering why it isn't badder, to be honest.

Smithgift - Banks are not failing left and right because of the funny-money and creative accounting the governments around the world are letting them get away with, in order to stave off a collapse during the election cycle that would make the politicians look (and rightly so) as incompetent buffoons with little control of anything. The pols need to banks, and the banks need to pols, to keep the charade of solvency going long enough to extract everything they can in terms of power and wealth. The only way to keep the banks (and most nations) from failing is massive bailout and money-printing, i.e., economically raping just about everyone that isn’t a well-connected insider or a criminal cartel (but I repeat myself). The longer you put off the inevitable, waiting for a miracle that cannot come, the worse the correction will be. The smart politicians and bankers know this. They are just doing everything they can to keep it from collapsing on their watch, so they can blame the guys that inherit the mess as they party on their private islands.

A belated comment, Peter, but I'm confident you'll see the humor in it. :)

"Just for fun, I was playing around with an anagram generator to ascertain what would happen if we combined the BRIC nations (Brazil, Russia, India, China) with the possible combined alliance of PIGS nations (Portugal, Italy, Greece, Spain). The program came up with a new acronym: BIG PRICS. Perhaps I have too much time on my hands."