Unemployment: more about the 'big lie'


I've written frequently about the unemployment statistics, and how they're basically a fraud from start to finish - 'massaged' by officials to present the most favorable picture.  Now the Gallup organization has made many of the same points.  They've even called it 'The Big Lie'.

None of them will tell you this: If you, a family member or anyone is unemployed and has subsequently given up on finding a job -- if you are so hopelessly out of work that you've stopped looking over the past four weeks -- the Department of Labor doesn't count you as unemployed. That's right. While you are as unemployed as one can possibly be, and tragically may never find work again, you are not counted in the figure we see relentlessly in the news -- currently 5.6%. Right now, as many as 30 million Americans are either out of work or severely underemployed. Trust me, the vast majority of them aren't throwing parties to toast "falling" unemployment.

There's another reason why the official rate is misleading. Say you're an out-of-work engineer or healthcare worker or construction worker or retail manager: If you perform a minimum of one hour of work in a week and are paid at least $20 -- maybe someone pays you to mow their lawn -- you're not officially counted as unemployed in the much-reported 5.6%. Few Americans know this.

Yet another figure of importance that doesn't get much press: those working part time but wanting full-time work. If you have a degree in chemistry or math and are working 10 hours part time because it is all you can find -- in other words, you are severely underemployed -- the government doesn't count you in the 5.6%. Few Americans know this.

There's no other way to say this. The official unemployment rate, which cruelly overlooks the suffering of the long-term and often permanently unemployed as well as the depressingly underemployed, amounts to a Big Lie.

I've said it before and I'll say it again:  official government economic statistics aren't worth the paper they're printed on.  The problem isn't limited to the unemployment rate.  For example, it's claimed that US inflation was only 0.8% during 2014. 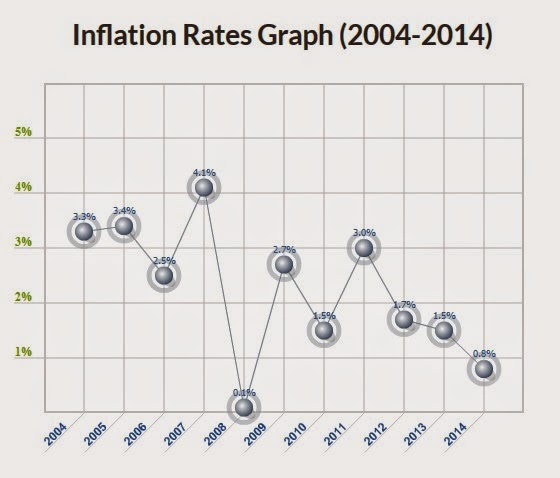 Sure it was - if you leave out of your calculations almost everything important to the consumer, including food, fuel and so on.  Shadowstats' John Williams measures inflation the old-fashioned way, leaving in every element of importance, and he comes up with a rather different picture. 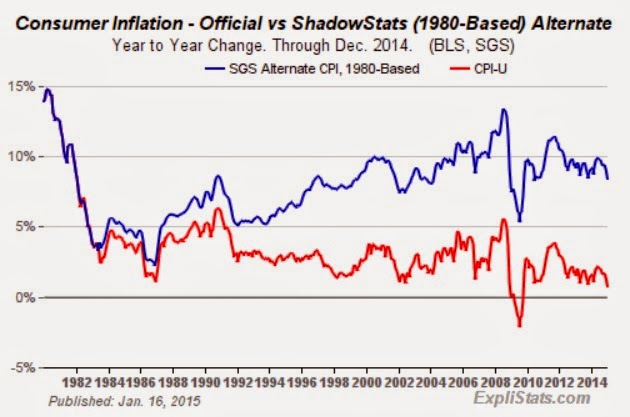 0.8%?  Or ten times that?  My money's on Mr. Williams' calculations.  I pay our bills.  The evidence in my wallet and my bank account is all on his side.

The Australian unemployment stats are arrived at in an identical way, consequently, they are also a total lie, utterly fraudulent, and completely worthless.
Were I a business owner/operator here in Australia, and I furnished to the Government figures relating to my business arrived at by the same methodology the Government uses, I would very soon be incarcerated, and for a long time.

One of the litmus tests for the next President will be whether they start requiring government to tell the truth about our economic situation.

Two years ago, I was a full time health care worker. I had to switch careers to get part time work as a high school teacher. I make less than half of what I was making when I was full time.

Another line on the graph that would show where money is being sucked out of the system and has a direct effect on inflation and unemployment is the amount of goods and services that are purchased with government funds. This would include government purchases and entitlements to citizens. The government money makes things seem better than they are but it is really confiscated money that is pumped into the system and is really a negative unless you are buying votes.

I have been out of work for 1 year and 8 months. Have been looking everyday. and I mean everyday. sent resumes, phone calls, contacts-you name, I did it. Being 57 doesnt help.
30 years in telecommunications. central office work, wireless, etc.

Recently offered a job at 13.00 bucks an hour. entry level installer. Guess what?
I took it. Trouble is that year and 8 months put us in the hole so deep I don't think we will ever recover.

Perhaps the main reason the government continues this fraud is because of the carter era cost of living adjustments built into most government benefit programs. Social Security, in particular, cannot afford to fund the benefit rises from an accurate measure of inflation.
This goes for many state level programs as well. They literally can't afford to tell the truth.