.22LR as a defensive round, revisited


Some years ago I wrote an extended article on the use of the .22 Long Rifle round for personal defense.  It has its drawbacks, sure, but if you're prepared to put in the time and effort to master it (and I mean really master it, to the point of hitting a rolling ping-pong ball seven out of ten times at ranges of ten to fifteen feet in rapid fire) it'll certainly get the job done.

Last weekend, via an e-mail list of which I'm a member, I came across this article at Tactical Life.

The Beretta Model 70 and the functionally identical Model 71, both in .22 LR, have served with great distinction as the signature terminator pistol of the Mossad, the premiere intelligence agency of the State of Israel. The Beretta 70 was also carried by Israeli Sky Marshals. 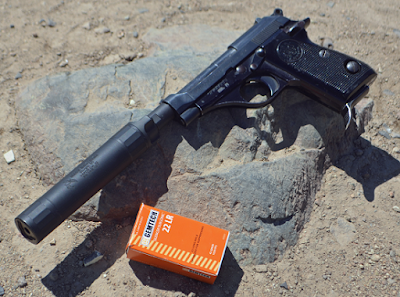 One of the most famous incidents involving the use of a .22 caliber Beretta 70 “Jaguar” pistol occurred in February of 1969 ... Israeli Sky Marshal Mordechai Rachamim engaged several heavily armed Arab terrorists as they attacked an EL Al airliner on a snow covered runway in Zurich. Despite the odds against him, the young Israeli sky marshal expertly used his issued Beretta Model 70 pistol to kill one of the Palestinian terrorists, moments before the Zurich Police arrived and took the remaining terrorists into custody. The three surviving male Palestinian terrorists received 12-year jail sentences for attacking a commercial airliner with machine guns and explosives that resulted in the killing and wounding of several passengers and crew. Sky Marshal Mordechai Rachamim became an instant hero at home in Israel.

Rachamim told the author that during this engagement at least two of the rounds fired from his Model 70 hit the mark and were responsible for one of the male terrorists being KIA—pretty good shooting, considering that Rachamim single-handedly charged the enemy position while he emptied his .22 caliber pistol at the heavily armed terrorists. Even though Israeli Sky Marshal Rachamim was only armed with a .22, far too much was at stake for him to miss his target. Failure was not on option.

In May of 1972, Rachamim participated in another daring and equally dangerous tactical operation involving aviation security when he and other members of Israel’s elite Sayert Matkal commando unit rescued passengers and crewmembers onboard a hijacked Sabena Airline flight at Lod Airport (now, Ben-Gurion) in Tel Aviv ... As the signal to move was given, Rachamim once again used his issued Model 70 to kill one of the Palestinian terrorists. A second male Palestinian terrorist was also gunned down.

Back in the late 1960s and 1970s even the Israelis were still learning how to improve security. Israel selected the Beretta 70/71 because this .22 caliber pistol is a compact, accurate and flawlessly reliable performer that could easily be used to quickly and accurately deliver multiple rounds into vital parts of a human body. The Beretta Model 70/71 in .22 Long Rifle has virtually no recoil and can be easily controlled in rapid fire. There was also little chance that a .22 caliber bullet would cause significant collateral damage inside the crowded cabin of an airliner. No group of armed professionals ever used a .22 caliber pistol as effectively as Israeli Mossad operators and Israeli sky marshals.


There's more at the link.  Very useful information, and recommended reading.  You'll find more information (and lots more pictures of former Israeli Models 70 and 71) in this article, too.

The Beretta Model 70/71 is long out of production, and finding good-condition examples on the used gun market is an iffy proposition.  However, there are several other excellent choices out there, compact enough for concealed carry, including the Ruger SR22 and Smith & Wesson's M&P22 Compact (both of which are in my collection), as well as other options such as the SIG P250 in .22LR, which I haven't yet tried for myself.  (Note that I do NOT recommend that company's earlier SIG Mosquito.  I've seen too many of them prove unreliable in shooters' hands, including repeated failures to feed and/or eject.  It was discontinued in 2013.)

The lowly .22LR is by no means the best "first choice" for self-defense;  but if that's all the recoil you can handle, or it's the only weapon available to you, it can and will get the job done if you do your part.  My correspondent this weekend witnessed a former Israeli operator shooting at a 2" strip of masking tape at a range of 10 yards.  He was getting 1" groups out of a full 10-round magazine at that range.  If you can shoot that accurately, you can shoot a man's eye out of its socket at 10 yards - and that's as close to a guaranteed stop as you're likely to get!

If this makes you think, go read my earlier article (if you haven't already done so), then rent a couple of options from your local shooting range (or borrow friends' guns) and try them for yourself.  You may be pleasantly surprised.

The Sig Mosquito wasn't actually manufactured by Sig, It was made by German Sport Guns (GSG) and like the Sig 1911-22 was rebranded as a Sig.
I believe that it is still being sold by GSG as the "Firefly". Performance is still sub-par.

I had a browning Nomad decades ago, that was fun for shooting rabbits in the sage brush.

Toys and game getters. Fun stuff, but in a self defense situation with a .22, head and neck close up, further away, maybe just run and make that much further away.

I have an old Erma-Excam RX22 (Walther PPK copy) that I have confidence in. I bought it in 1981, when finding and purchasing a 'real' rimfire PPK was completely out of the question. I don't think I've missed much - the Erma shoots plenty well enough.

I recently installed wood grip panels bought from a Turkish supplier on the internet, as I was afraid breaking the factory plastic would make it no longer useful. I almost installed the MMC PPK rear sight on it back in 1980's, and sort of wish I had, windage only does have some limitations. The MMC sight used the factory front blade.

It is a 'high-miler' for me, carried all over the place and has provided me some fine meals during deer season when coming back to camp.

Exactly like commercial real estate, defensive shooting's first three priorities are all about location, location, and location.
And as always, getting hit accurately with a .22 is far worse on one's prospects than getting missed by anything larger.

Your highly reliable 22 pistol with one ammo will turn into a boat anchor on another type of round.

In our steel matches most rimfire pistols run much better on copper jacketed bullets then the lead nose variety. I've never seen a P22 get off more that 2 rounds in a row on lead nosed bullets.

I run mostly CCI or Aquila, never anything by Remington.

Regarding your reference to the Sig P250: I have one, and also have a conversion kit that, by the simple act of pulling the Fire Control Unit from the .22LR frame and putting it into another, along with a swap of barrels and recoil spring, it will now shoot .45 ACP.

I find this setup to be of some utility: I can go to the range and run several hundred rounds of .22LR through the gun, working on my mechanics at a lower cost and causing less fatigue than I could with .45ACP, and then have a carry gun with the same trigger, same ergonomics, etc.

I'm not averse to shooting 50 rounds of .45 in a day, but much more than that and it borders on "not such fun anymore". I don't have that issue with the .22LR version.

Add that the years long draught on .22 ammo has finally ended, praise be, and quality rounds are once again available in case lots. The key of course is that with cheap available ammo one may practice, practice, practice, and all without breaking the bank.
I own several variants of the Ruger Mark pistols, an SR22 and a Walther P22. All fine shooters with ammo that they prefer.
I've added an adapter to the Walther to make it ready for a suppressor should the Hearing Protection Act ever come to pass. My property backs onto a wood lot so I have a periodic need for varmint control, and the Calibre quiet rounds I currently use for that purpose are simply lacking in punch with their 29 grain slugs propelled just by primer. I've also cast a lustful eye on the new integrally suppressed Ruger 10/22 takedown rifle. Accurate and wicked quiet with standard velocity ammo from all I can tell.

The .22lr is inherently not as reliable as a center fire cartridge. They are also notoriously picky about ammo. One gun might love CCI and jam on everything else, another likes Remington and hates, CCI. If I was going to carry it for defensive use I would use a revolver.

I look at .22's defensively like I do a shove or hammer. They are not primarily a defensive tool but can be pressed into service as needed.

"The .22lr is inherently not as reliable as a center fire cartridge."