Some of the best magical military fantasy around


I'm thoroughly enjoying "The Fall of Dragons", fifth and last volume in Miles Cameron's Traitor Son cycle, which has just been published. 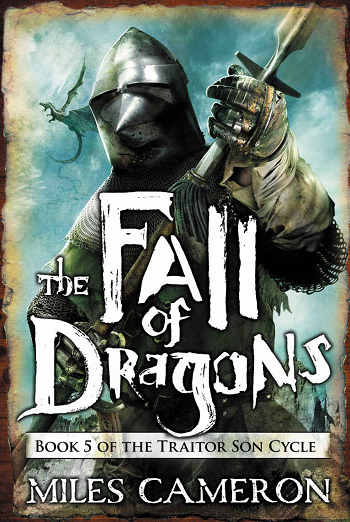 It's an impressive and profound conclusion to the series.  The only thing wrong with it is that it's the last book in the cycle!  The blurb reads:

In the climax of the Traitor Son Cycle, the allied armies of the Wild and the Kingdoms of men and women must face Ash for control of the gates to the hermetical universe, and for control of their own destinies. But exhaustion, treachery and time may all prove deadlier enemies.

In Alba, Queen Desiderata struggles to rebuild her kingdom wrecked by a year of civil war, even as the Autumn battles are fought in the west. In the Terra Antica, The Red Knight attempts to force his unwilling allies to finish the Necromancer instead of each other.

But as the last battle nears, The Red Knight makes a horrifying discovery...all of this fighting may have happened before.


I suggest reading the books in sequence, because the overall story arc will make more sense that way.  The five books, in order, are:

Mr. Cameron (a pseudonym - does anyone know his real name, or the name[s] under which he's published other books?) brings to his writing a thorough, practical background in medieval and early Renaissance arms and armor, and their use in battle.  He also displays an impressive knowledge of the magical school of hermeticism, and employs it extensively as a counterpoint to more traditional religious faiths, with emphasis on Christianity in a heavily Catholic context, but also involving Orthodoxy and Islam in their primitive forms, as well as animist beliefs and traditions.  It makes for a very interesting synthesis of myth and legend, faith and fantasy.

If you like military-oriented fantasy with a strongly-developed magical system, this series is for you.  Highly recommended.

According to Wikipedia, his actual name is Christian Cameron. Here is a link to his website, it looks like he has a few other series as well. They look amazing, I'm looking forward to reading them!

Somewhat along the same lines is a series by S I Stirling.

Stirling has quite a few books and series out there, but the series that begins with the book "Dies The Fire" is a good one.

Not so much magic, but we've suddenly lost all higher technology such as internal combustion, gunpowder, electronics, steam power, etc.

You just have to accept that this somehow happened, and go from there.
Now you've got all these modern folks with no more technology than was available in pre-gunpowder days of maybe 1300.

The Gordon Kent (pseudonym for Cameron and his father) thrillers were also very good.

$10 dollars a book on Kindle. Published by Hatchette and price set by them. Not on Amazon's Kindle Unlimited that is spoiling me...